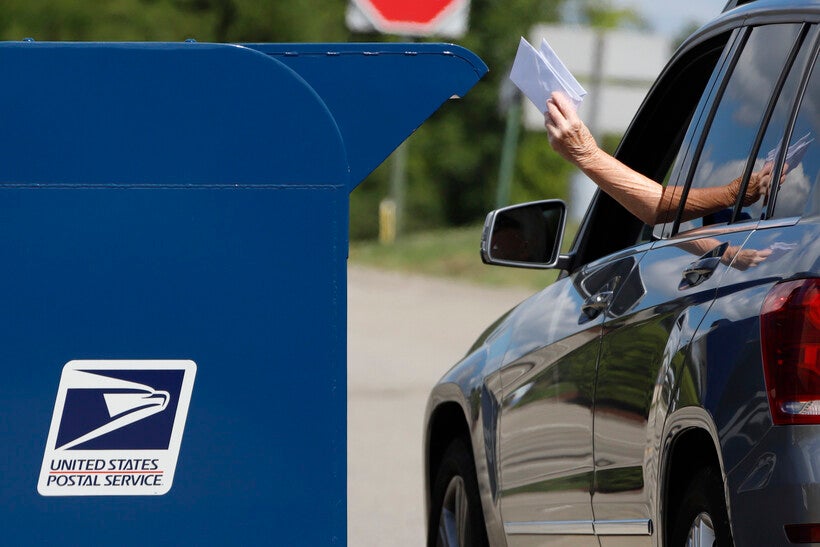 In this Aug. 19, 2020, file photo, a person deposits mail in a box outside United States Post Office in Cranberry Township, Pa. U.S. Postal Service records show delivery delays have persisted across the country as millions of Americans began voting by mail, raising the possibility of ballots being rejected because they arrive too late. Parts of the politically coveted battleground states of Wisconsin, Michigan, Pennsylvania and Ohio fell short of delivery goals by wide margins as the agency struggles to regain its footing after a tumultuous summer. Gene J. Puskar/AP Photo

A Waukesha County Judge ruled Wednesday that clerks are not allowed to fill in missing information on absentee ballot witness certificates, a decision that could result in thousands of ballots being rejected this November.

Judge Michael Aprahamian sided with Republicans in their lawsuit against the Wisconsin Elections Commission, saying the agency had been "stubborn and unjustified" in its reliance on the guidance despite efforts by a state legislative committee to block it.

"Wisconsin law does not authorize election officials to correct, modify, alter or add to an absentee ballot certification," Aprahamian said.

The WEC first approved its guidance on absentee ballot witness certificates in 2016 under a 6-0 vote by the commission, which is split 3-3 between Republicans and Democrats. The idea behind the policy was to reduce the risk of accidental voter disenfranchisement.

It wasn't challenged until after the 2020 presidential election when former President Donald Trump was attempting to reverse President Joe Biden's victory in Wisconsin. A majority of justices on the Wisconsin Supreme Court rejected that challenge because it was filed after the election.

A legislative committee controlled by Republicans ordered the WEC to rewrite the policy as an administrative rule — a move that would have given it the force of law but would also give lawmakers a chance to veto the plan. GOP lawmakers tried to do just that earlier this summer when the Joint Committee for the Review of Administrative Rules voted to reject the proposal.

Still, the WEC argued the original guidance remained in place without a 4-2 vote to revoke the guidance. A group of GOP voters sued, and on Wednesday, Aprahamian sided with them.

"WEC cannot continue to promulgate advice it knows — or should know — violates state law and the intent of the Legislature," Aprahamian said.

Aprahamian scheduled another hearing in the case for next Monday to decide whether to temporarily stay his ruling while the case is appealed. The Wisconsin Supreme Court is all but certain to have the final say on the issue.

How the court might rule in the case is unclear. While the court has a 4-3 conservative majority, conservative swing Justice Brian Hagedorn has shown a willingness to buck his party.

In the majority opinion he wrote rejecting Trump's 2020 lawsuit, Hagedorn noted that what constitutes a voter's address is not entirely clear under Wisconsin law.

"While the world has surely faced more pressing questions, the contours of what makes an address an address has real impact," Hagedorn wrote in his Dec. 14, 2020 opinion. "Would a street address be enough, but no municipality? Is the state necessary? Zip code too? Does it matter if the witness uses their mailing address and not the residential address (which can be different)?"

Whatever the court ultimately decides on this issue could potentially affect tens of thousands of Wisconsin voters based on a review by the Legislative Audit Bureau.

As part of a sweeping audit of the 2020 election, the bureau reviewed 14,710 absentee ballot certificates in 29 municipalities and found that 1,022 certificates were missing parts of witness addresses. That's roughly 7 percent of all certificates the agency reviewed.