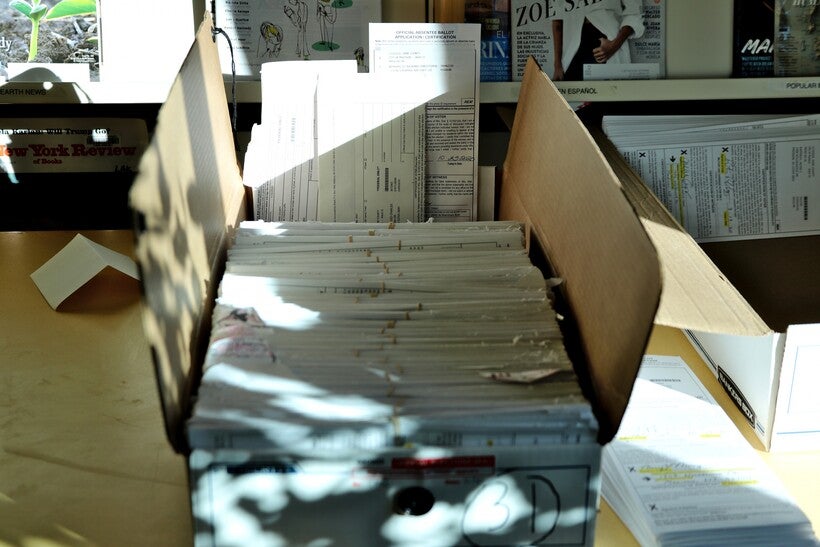 A box of absentee ballots at the Lakeview Library on Madison's north side on Nov. 3, 2020. Steven Potter/WPR

Local election officials have relied on WEC guidance telling them to fix incomplete addresses on absentee ballot envelopes since 2016
By Rich Kremer
Share:

A vote by a powerful state legislative committee to reject a proposed rule on absentee ballot witness certificates has led to a dispute with Wisconsin's elections agency and caused confusion in the state's largest city ahead of the Aug. 9 primary.

On Wednesday, the Republican-led Joint Committee for Review of Administrative Rules voted to reject a rule proposed by the Wisconsin Elections Commission that would have required election officials to fix incomplete addresses on absentee ballot envelopes. Republican committee members said the rule conflicted with state law. Democratic members said the rejection would result in voters being disenfranchised due to mistakes beyond their control.

The rule rejected by the legislative committee would have given the force of law to WEC guidance that's been in place since 2016. While that effort failed, the WEC said the underlying guidance remained in place.

"So logistically, there are lots of questions," said Woodall-Vogg. "What do we do with the ballots that we have already cured? And then, what do we do now that we have a new rule possibly, or a new procedure when it's this close to the election and when mailing a ballot back to a voter might risk us receiving it in time to be counted?"

Woodall-Vogg said her office has already received around 9,000 ballots for the Aug. 9 primary election and that last minute changes to election procedures go "against all recommended practices from election administrators."

"It just creates more confusion for voters," said Woodall-Vogg. "It creates a distrust."

The policy at the heart of the dispute between GOP lawmakers and the WEC was passed unanimously by Republican and Democratic members of the commission in 2016 and has been used in multiple elections since.

In an emailed statement sent Thursday afternoon, the commission said changes to its underlying guidance from 2016 "require a two-thirds vote of Commission members" and therefore "it continues to remain intact."

"Commissioners may meet to discuss the JCRAR’s vote or to take further action on the Commission’s 2016 guidance," said the statement. "As with any decision, Wisconsin’s local clerks, along with their legal counsel, can consider the recent legislative committee activity as they plan for upcoming elections."

"I have asked my leadership to immediately take legal action to obtain a court order to compel WEC’s compliance with state law regarding absentee ballot certification procedures," Nass said.

State statute says an absentee ballot envelope missing the address of a witness "may not be counted" by election workers. But during a public hearing prior to the rejection of the rule, attorney Scott Grosz of the nonpartisan Wisconsin Legislative Council said the word "address" could have different interpretations under Wisconsin law.

"The actual extent of what satisfies the definition of address for this particular context, I think, would best described as ambiguous and something that's likely to be resolved in the courts," said Grosz.

Indeed, a lawsuit has already been filed in Waukesha County Circuit Court by a group of plaintiffs that includes the Republican Party of Waukesha County. It seeks declaratory judgment from the court that the Wisconsin Elections Commission guidance from 2016 runs contrary to state law. The lawsuit also asks the court for a declaration that "municipal clerks and election officials are not permitted to correct, or otherwise add information to, an insufficient witness certification."