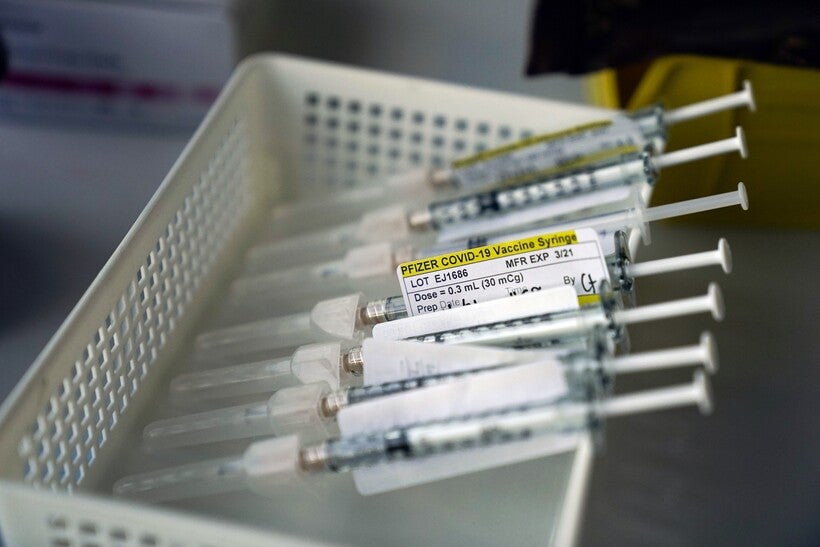 In this Jan. 7, 2021, photo syringes containing the Pfizer-BioNTech COVID-19 vaccine sit in a tray in a vaccination room at St. Joseph Hospital in Orange, Calif. Taking a new direction to speed release of coronavirus vaccines, President-elect Joe Biden's office said Friday he would end the current practice of holding back vaccine doses to guarantee that people who get their first shot can also get a required second inoculation three weeks later. Jae C. Hong/AP Photos

Educators and child care workers could receive priority over other groups of essential workers for COVID-19 vaccines, according to recommendations by a state panel.

The State Disaster Medical Advisory Committee at its Thursday meeting proposed giving priority within the state’s phase 1b vaccination group.

That group also includes people who work in public transit, employees of grocery stores and other parts of the food supply chain, utility workers, 911 operators, non-frontline health care workers, those in the mink industry, and people who live and work in correctional facilities.

Wednesday, a panel of medical and ethical experts in the state recommended to the committee that grocery workers be prioritized for the vaccine along with bus drivers, teachers, inmates and correctional staff.

The state Department of Health Services makes the final decision on who can receive shots. Initially it prioritized frontline health care workers and staff and residents in long term care facilities for the first doses of vaccine.

This week it said police and firefighters would be eligible, and those 65 and older can get shots starting Monday.

The panel has received thousands of comments on which groups should get priority next. Its chair, Dr. Azita Hamedani of UW-Health, said many comments focused on those who work with children, which prompted calls for those positions to get priority within phase 1b whenever possible.

But there have been public calls on behalf of many other groups.

This week, trade groups representing grocers said their workers, which have been classified as essential since the start of the pandemic, need to be prioritized.

Dr. Jon Temte of the University of Wisconsin School of Medicine and Public Health noted that Wisconsin is a major mink farming state, and that COVID-19 spread among mink could put the state at risk of seeing new and potentially dangerous coronavirus mutations at crowded mink farms.

And Dr. Arthur Derse of the Medical College of Wisconsin emphasized groups of workers that help support getting children in schools.

The co-chair of the panel's vaccine subcommittee, Ann Lewandowski, noted guidance that said because prisoners have a right to health care under the Eighth Amendment, they must be considered for priority along with other groups.

Meanwhile, the chair of the Wisconsin Assembly's health committee has proposed a bill that would make vaccines available to the public by mid-March, rather than June as state health officials have estimated.

Hamedani said the push to include essential groups in the early phases of vaccination, such as those with chronic health conditions, puts large numbers of people on the priority list for shots, even though DHS does not expect its supplies of vaccine to grow beyond the roughly 70,000 it receives each week.

"If you look at 1a and 1b together," she said, "almost half of adults in Wisconsin are now included."

And, she said, with so many types of essential workers and at-risk groups in need of vaccination, all residents will need to take precautions against spreading the virus for some time to come.

"I keep hearing, as soon as we get the vaccine, we don’t have to worry about everything else, and that is not the case right now," she said. "Vaccination does not negate the need for continued adherence to best practices (such as) masking hand hygiene, testing, isolation and quarantine."