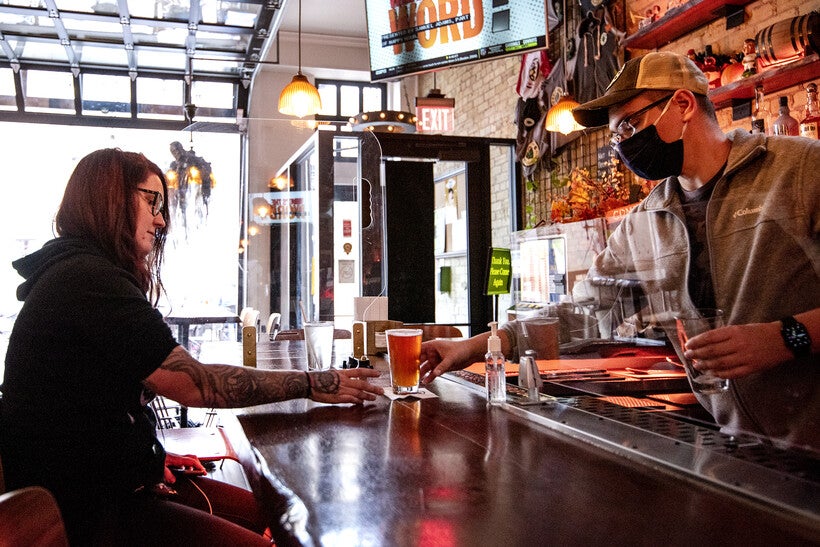 Wisconsin continues to see extremely high levels of coronavirus activity across all 72 counties in the state. Because of increased spread, record-breaking deaths and the state's hospital systems nearing capacity, some localities are tightening local restrictions on gatherings and businesses in an attempt to get community spread of the virus under control.

In addition, a number of statewide COVID-19 restrictions have been stopped by the courts or are pending court review. Gov. Tony Evers' statewide indoor capacity restrictions for places like bars and restaurants were halted by a state appeals court in late October. The state Supreme Court declined to hear an appeal in that case on Nov. 4. That means those capacity restrictions are no longer in place statewide.

Below is a list of confirmed local restrictions in towns, cities and counties across the state. This list was last updated at 12:30 p.m. on Dec. 8.

On Dec. 4, Bayfield County extended a ban on indoor and outdoor gatherings with more than 100 individuals. The order continues to cover activities like gatherings at beaches, concerts, festivals, meetings and trainings, conferences and sporting events, among others. It also specifies that the order extends to planned and unplanned events.

The county's public health department announced the original order following an outbreak tied to a wedding in Washburn in late August. The health department cited the "continued upward trend in new COVID-19 cases" in the county when it renewed the order, according to a Facebook post from the department.

But a long list of exemptions to the order exists, too. Those include the county's schools, manufacturing businesses that make essential goods or services, places of worship (although the county encourages religious gatherings to be as small as possible), polling places and child care locations, among other sites.

Each violation of the order is punishable with a fine of $200 to $500. The latest version of the order took effect Dec. 4, and expires at 11:50 pm on Jan. 3. More details and the full list of exemptions to the order restricting public gatherings can be found here.

Another previous order was revised to allow for the resumption of in-person interscholastic competitions, like spelling bees and quiz bowls, so long as the schools competing have a COVID-19 prevention plan. But the latest order bars spectators from attending indoor competitions, only allowing for spectators at outdoor competitions if health and safety practices are being followed.

The order further states that the number of staff and students attending "should be kept to the minimum necessary for holding the event."

Options for parents and friends to watch competitions virtually are encouraged by the department. More details and the full list of exemptions to the order restricting spectators at school competitions can be found here.

On Nov. 17, Public Health Madison and Dane County announced new restrictions on gatherings, which includes a prohibition on indoor gatherings of any size with people from different households. The order also limits outdoor gatherings to 10 people or fewer with physical distancing.

On Nov. 23, a conservative legal group asked the Wisconsin Supreme Court to block the latest restrictions from Dane County public health officials, arguing that restrictions that allow individuals to gather with coworkers at work while barring them from small private family gatherings is "patently unreasonable and unlawful."

It's unclear how quickly the court will respond to the challenge.

Restaurants in Dane County continue to operate at 25 percent capacity for indoor dining. Bars and taverns are barred from serving customers indoors, but outdoor seating is permitted with physical distancing.

After the order was announced Nov. 17, there was some confusion about what size indoor gatherings were banned under the order, which used the term "mass gatherings." Public Health Madison and Dane County issued an amendment on Nov. 20 clarifying that "mass gatherings" was defined as "any gathering of individuals that are not members of the same household or living unit."

On Dec. 2, Milwaukee updated its public health order, tightening restrictions on bars and restaurants in addition to adding tougher restrictions on team sports, according to a press release from the city's Health Department.

Previously bars and restaurants were limited to 25 percent capacity, but that occupancy restriction could be waived if the department approved an individual bar or restaurant that was complying with the city's restaurant and bar safety plan.

In addition, school and club team sports are only permitted if they have an approved safety plan that includes routine testing for COVID-19.

Citywide restrictions will automatically revert to those under the city's prior, less strict order on Jan. 15, a change the department said was "a change from past practice."

The Racine City Council voted Dec. 1 to extend citywide COVID-19 restrictions on gatherings and the city's mask mandate through June 30.

The Racine Public Health Department originally announced the restrictions in November, citing the "activity level of the virus and its seemingly uncontrolled spread throughout the community."

Dottie-Kay Bowersox, public health administrator for the city, said the new measures were needed to get the level of community spread in Racine under control. She added that some in the city have been abiding by public health guidance, while others in the community have not.

"I get complaints on a daily basis of places where people are simply not paying attention to those very simple rules," Bowersox said.

Events at places of worship, outdoor amusement sites and indoor and outdoor mass gatherings at private venues are restricted to 50 people or fewer with some exceptions, according to the announcement.

In a separate order issued on Nov. 12, the city's public health department ordered all school buildings to close between Nov. 27 and Jan. 15. Many public school students in the city had already been doing virtual instruction, but a conservative legal group filed a legal challenge against the order in court on behalf of a number of private schools in the area and religious and school choice groups.

On Nov. 25, the Wisconsin Supreme Court temporarily blocked the order from taking effect until the court decides a separate but similar legal challenge against an order shuttering schools in Dane County.

On Sept. 3, the Red Cliff Band of Lake Superior Chippewa ordered all reservation residents to stay-at-home except for "necessary activities and work," according to the order. The order took effect Sept. 4 and ran through Sept. 28, when the Tribal Council voted four to three to amend the order to an advisory instead. The vote came after the number of new positive COVID-19 cases on the reservation was trending downward in late September.

A mask mandate that took effect on Aug. 3 within the boundaries of the Red Cliff Reservation remains in effect as of Nov. 30. That ordinance requires masks to be worn in all indoor spaces and outside when physical distancing is not possible with someone of a different household.

Exceptions to the mask mandate include children four years and younger, those with certain medical conditions, and those that are driving, among others. Individuals who violate the ordinance can be fined $50 for a first offense, and up to $500 for repeat violators. Businesses could be hit with fines or face closure if they refuse to comply, according to the order.

More information on the tribe's mask mandate can be found here.

On Nov. 16, Rock County announced it would return to phase one of its reopening plan in light of "high community spread, rapid increases in the number of people testing positive, and rising numbers of hospitalizations and deaths," according to a press release from the county's public health department.

The county is not mandating restrictions on gathering sizes or businesses, like in Dane County.

"We believe that residents of Rock County and our community are dedicated to the health of their community members — their friends and their family — and will follow our recommended guidance," Cordova said.

Instead, officials are now urging everyone in the county to avoid gatherings of any size with individuals from different households. County officials further say public and private gatherings, festivals, concerts, parades and contact or team sports should not take place.

Editor's Note: This story will be updated continuously.