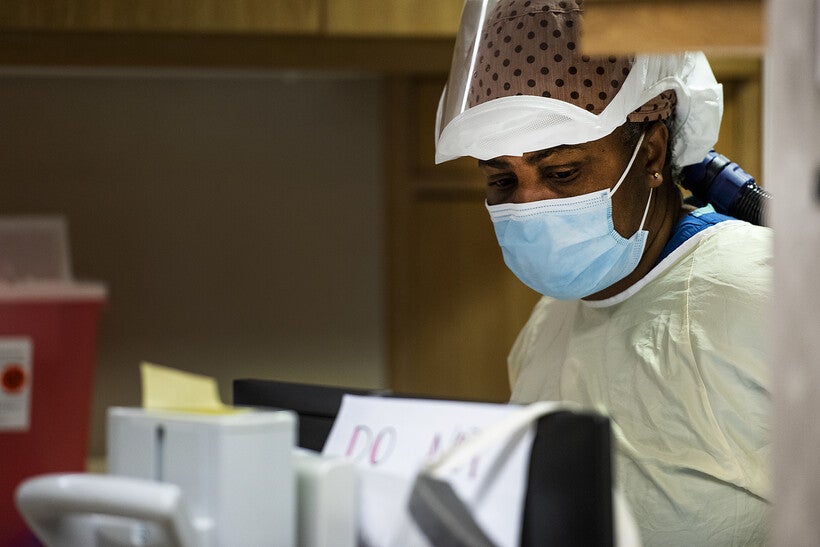 A healthcare worker wears a mask as she works outside of a COVID-19 patient’s room Tuesday, Nov. 17, 2020, at UW Hospital. Angela Major/WPR

Wisconsin reported more than 100 deaths in a single day for the first time since the start of the COVID-19 pandemic, with a record 104 deaths reported Tuesday.

"It is 104 deaths that were preventable, and that remind us that we need to do everything we can to stop the spread of this disease," said Wisconsin Department of Health Services Secretary Andrea Palm during a Tuesday press briefing. "Our situation in Wisconsin is only going to get better if we all take steps together to change the course of this pandemic."

Palm and Gov. Tony Evers urged Wisconsinites to stay home over Thanksgiving, and only celebrate in person with those in their household.

"We hold in our own hands whether or not we see a surge on the back side of the Thanksgiving holiday," Palm said. "I would urgently ask folks, please, to do their part so that our frontline health care workers in our hospital system don't become more overwhelmed than they have been in these last couple of weeks."

New reports of COVID-19 cases are averaging at around 5,732 cases per day in Wisconsin, based on the latest data published by DHS.

DHS reported 6,202 new cases of the disease Tuesday, bringing the average for the past seven days to 5,732 daily cases. One week ago, the average was 6,429 daily cases. Daily new cases are below last week's peaks, but remain high.

Of the people who got tested for COVID-19 over the past week, 28.7 percent were positive for the disease, according to DHS. That rate has been on a slight decline over the past two weeks.

On Sept. 30, DHS also introduced an alternative positivity rate, one that measures the percentage of tests that are positive, instead of the percentage of people who get a positive result. The new metric takes into account people who have been tested multiple times. The seven-day average for that number is at 13.2 percent, and has also seen a slight decline over the past two weeks.

Ryan Westergaard, Wisconsin's chief medical officer, said the declining positivity rates and case rates are encouraging signs, and could mean new cases are plateauing. However, he said, the rates of COVID-19 transmission and new hospitalizations and deaths are still cause for significant concern.

"The level of transmission and the number of cases are critically high, so the answer to the question, 'Are we flattening the curve,' is no," Westergaard said. "All communities have high disease activities, and in that environment, there's risk of transmission to and from people who don't know that they're infected, and that's really the greatest risk right now."

According to the Wisconsin Hospital Association, there were 1,999 COVID-19 patients hospitalized as of Monday. A total of 16,209 people have been hospitalized because of the disease, or 4.5 percent of all positive cases.

Palm said combating staffing shortages for Wisconsin hospitals and care facilities has been a top priority, especially as hospitalizations are likely to continue to rise. Palm said Wisconsin has been making some regulations more flexible and adding beds to some skilled nursing facilities to try to maximize those who are still able to work.

"We have pulled as many levers as we can get our hands on to provide some relief in the space of staffing," said Palm. "As we have seen really intense community spread in the state of Wisconsin, that has meant that our frontline health care workers, who live in communities, are being exposed to COVID and either needing to quarantine or becoming infected."

The latest figures bring the overall total of positive cases in Wisconsin to 363,973, according to DHS. A total of 3,115 people in Wisconsin have died from COVID-19.

Wisconsin's daily testing capacity — based on the availability of test supplies and adequate staffing — has grown from 120 available lab tests in early March to 59,495 as of Tuesday. The number of actual people with new test results reported Tuesday was 16,510.