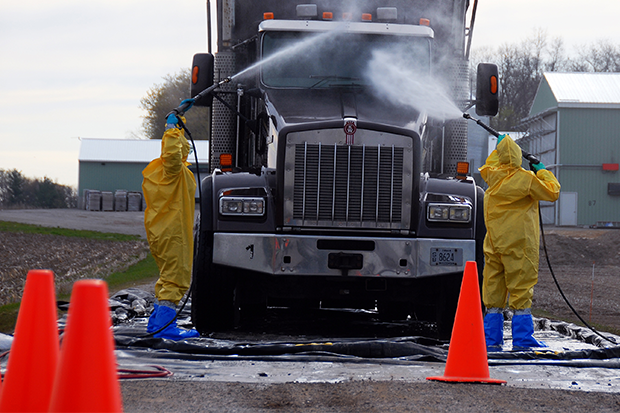 The avian influenza epidemic of 2015 required a cooperative effort between state and federal agricultural officials and the poultry industry. Wisconsin's Department of Agriculture, Trade and Consumer Protection (DATCP) worked with affected farms to confirm the presence of H5N2 and drew on its own expertise and personnel, as well as those of federal agencies and ag-industry partners to coordinate a response. Gov. Scott Walker declared a state of emergency on April 20, authorizing the Wisconsin National Guard to provide assistance. The governor's announcement said that the assistance would help make up for the load the epidemic put on federal resources nationwide.

National Guard personnel also helped farmers clean and decontaminate vehicles traveling from farm to farm in an effort to stop the disease from spreading further.

To ensure the disease doesn't spread, non-infected farms in a quarantine must test all their poultry for the virus and post two rounds of negative results. The quarantine lasts for at least 21 days after the birds on the infected farm have been depopulated. Infected farms are subject to a much more intense regimen of cleaning and decontamination, testing for the virus in environmental samples from the property, and removing any potentially infectious material.

As UW-Extension poultry specialist Ron Kean explained on Wisconsin Public Television's "Here And Now" during the outbreak, the U.S. Department of Agriculture pays to have infected flocks killed, both because it helps to contain the disease, and because it is considered more humane than letting the birds die from the virus. Producers then work with state regulators to determine the best way to dispose of the dead birds. The standard method during this epidemic was to compost them: The virus cannot survive at temperatures above 130 degrees Fahrenheit, and when done properly, composting raises the bird carcasses to this temperature or higher.

The USDA has estimated that it has spent about $191 million to indemnify farmers for birds lost in the outbreak, and at least $400 million to dispose of depopulated birds and disinfect farms hit by the epidemic.

Juneau County's quarantine zone, where the flock of 33 backyard birds was infected, was the first to be released from quarantine, on May 19. Chippewa County, which had one of the affected Jennie-O-supplying turkey farms, followed on May 26. The Jefferson County quarantine, around the three stricken egg-laying operations, was lifted on June 9. Officials lifted the last of Wisconsin's quarantines on June 10, in Barron County.

Later in June, state veterinarian Paul McGraw issued new restrictions on poultry exhibitors, intended to prevent any further spread of the disease. These rules, in effect through Dec. 31, forbid taking poultry to any open show or swap meet that isn't part of a state, county or district fair, and require poultry farmers exhibiting at fairs to certify that no poultry have died on their farms over the 10 days before the event. These and similar orders in other states led to the cancellation of poultry shows across the country.

Over September, DATCP hosted workshops in four cities titled "Avian Influenza -- Lessons Learned and How to prepare for the Future." USDA officials and Wisconsin researchers also have warned that dropping temperatures and southward-migrating wild birds could lead to another outbreak in the fall.

McGraw looked toward the future in a Sept. 9 interview on WPR's "The Larry Meiller Show." As the state watches out for a possible fall resurgence in avian flu, McGraw said that regulators are working to test hunter-killed wild birds and commercially slaughtered poultry for disease. McGraw says that DATCP sent information about the aforementioned "Lessons Learned' sessions to all 19,000-plus of the state's registered commercial and home poultry premises. And while the Wisconsin farms hit in the epidemic are no longer under quarantine, McGraw acknowledged they still have a lot of recovering to do. "Some of these large egg-layers, it may take them up to a year to get to full production again," he said.

Officials also stressed that the avian flu strain in the outbreak is not a danger to human health, and that chicken, turkey and eggs would still be safe if properly prepared. During the outbreak, Kean pointed out the U.S. Centers for Disease Control and Prevention are working on a vaccine for H5N2, and that it makes sense to take such precautions because influenza viruses have a high capacity to mutate.