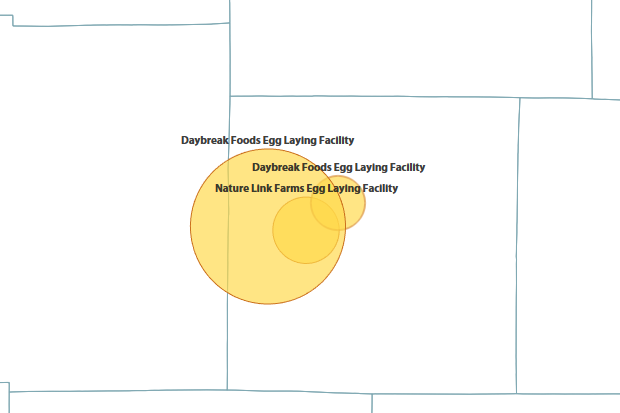 Among the Wisconsin farms hit in the 2015 avian influenza epidemic were three egg-laying operations in Jefferson County. The bigger the circle, the more birds a farm lost to the outbreak.

Avian influenza struck more than 1.9 million chickens, turkeys and mixed-breed fowl across four Wisconsin counties between April and May 2015.

The epidemic began on April 13 in Jefferson County in southeastern Wisconsin, when the state announced that 189,084 chickens at a cage-free egg-laying facility were found to be infected.

On April 16, detections were announced in a mixed-breed backyard flock of 33 birds in Juneau County, and in a 126,658-bird commercial turkey flock in Barron County -- the first of six northwestern Wisconsin turkey farms to be affected.

All of the affected turkey farms supply the Jennie-O Turkey Store processing plant in Barron. On April 22, the flu was confirmed in a flock of 56,480 turkeys at a Chippewa County farm that also serves the Jennie-O plant, and in a flock of 1,031,251 egg-laying chickens in Jefferson County.

On April 24 and 28, and May 3 and 4, the state confirmed the epidemic had spread to four additional Barron County turkey farms.

The virus was confirmed at another Jefferson County egg-laying flock of 127,971 chickens on May 4.

Since then there have been no new detections in Wisconsin.

Wisconsin fared far better than its poultry-producing neighbors (except for Illinois, which reported no avian flu cases in the epidemic). Iowa farmers lost 34 million birds and felt the shock of this agricultural emergency throughout the summer. Meanwhile, more than 9 million birds were destroyed in Minnesota.

Even adjusting for the relative sizes of the three states' poultry flocks, Iowa's losses to the epidemic are still dramatically worse than Wisconsin's and Minnesota's. Still, as University of Wisconsin-Extension poultry specialist Ron Kean told Wisconsin Public Radio in August, Wisconsin lost about 10 percent of its commercial poultry flock.

During the epidemic, state officials found the virus in one wild bird -- a snowy owl found dead in Oconto, north of Green Bay, and far from all of the infected farms.