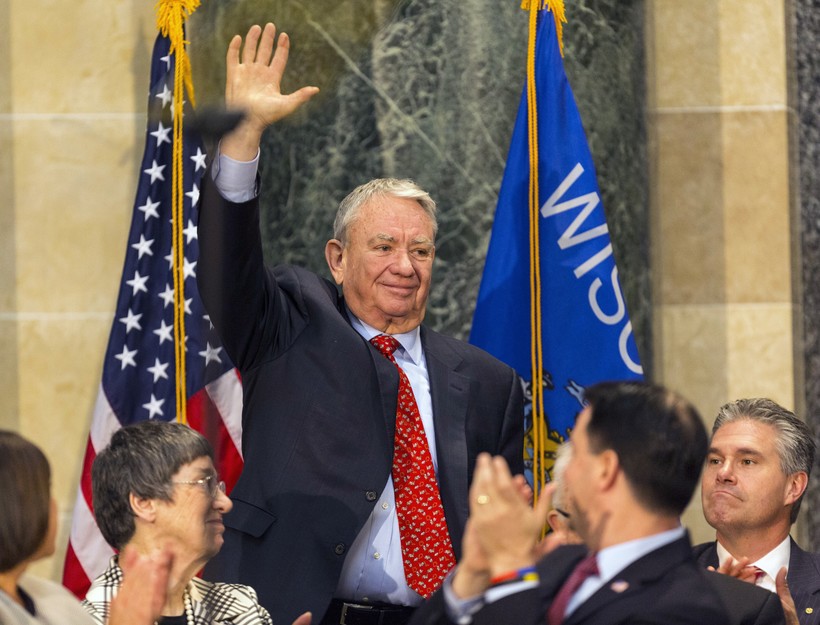 In this Jan. 5, 2015 file photo, former Wisconsin Gov. Tommy Thompson waves to the crowd during an inauguration ceremony for Gov. Scott Walker at the Capitol in Madison, Wis. Andy Manis/AP Photo

In emotional speech to UW Board of Regents Thompson touts challenges and accomplishments during nearly 2-year tenure
By Rich Kremer
Share:

In an emotional farewell speech to the University of Wisconsin Board of Regents, UW System President and former Gov. Tommy Thompson called on state lawmakers to direct part of a record budget surplus into public universities. He said UW System campuses shouldn't be considered an expenditure but rather an investment in the future.

Thompson started his hour-long speech to the board on Friday by mentioning the many challenges facing the UW System when he began his tenure as interim-president in July 2020.

At the time, the COVID-19 pandemic had essentially shut down college campuses across the nation. Schools were reeling from revenue losses and issuing tens of millions of dollars worth of refunds for unused student housing and dining fees.

"I made that tough decision," Thompson said. "I was — and I remain — convinced this was the right decision for our students. I must admit, though, not everyone was on board with the call, including a good number of my good friends, our chancellors."

The next year, Thompson was facing another kind of pressure related to the pandemic. In August, the Republican-controlled Joint Committee for Review of Administrative Rules, or JCRAR, voted to order the UW System to submit all COVID-19 mask and testing requirements for members' approval.

Thompson refused and despite a call from JCRAR co-chair and state Sen. Stephen Nass, R-Whitewater, for the state Legislature to sue the UW System for not following the directive, Republican leaders in the state Assembly and Senate sided with Thompson.

"I immediately countered that any attempt to block that authority was wrong on the law and wrong as a matter of public policy," Thompson told regents Friday. "Furthermore, it was just plain wrong given our highly successful track record for holding our COVID prevalence rates low."

The former four-term Wisconsin governor also touted UW System accomplishments during his tenure as interim president including a vaccination incentive campaign with student drawings for $7,000 scholarships. Thompson also pointed to community COVID-19 testing centers at UW System schools, a 3.9 percent boost in fall 2021 freshman enrollment, pre-college tutoring programs and state lawmakers' decision to lift a nine-year freeze on undergraduate, residential tuition increases as wins for the System and the state.

Thompson urged regents to continue his quest to create new opportunities for Wisconsin prison inmates to take classes and earn degrees from UW System schools. He has previously said he regrets overseeing the largest expansion of Wisconsin's prison system while governor.

"This is one of my real passions, to turn a prison into a college," Thompson said. "It’s clear to me now that our state has not done enough to give prisoners a second chance, and it’s equally clear that the UW has an opportunity to offer a solution by helping to break the cycle of recidivism."

Before he wrapped up his speech Thompson called on state lawmakers to use a projected $3.8 billion budget surplus to make "record investments" in the UW System. He said those investments can start by meeting state demands for nurses, engineers and teachers.

"If we truly want to grow Wisconsin, there’s no better place to start than with the UW System," he said. "The returns on investment we offer are not just measured in dollars but in richer, fuller lives for our people and our communities. That is the Wisconsin Idea."

Thompson announced in January that he will resign as UW System president on March 18. The UW System Administration office announced on Jan. 21 that regents had hired Milwaukee attorney and CEO Jay Rothman to replace Thompson. Rothman takes the helm of the state's 13 universities and 13 two-year campuses in July.