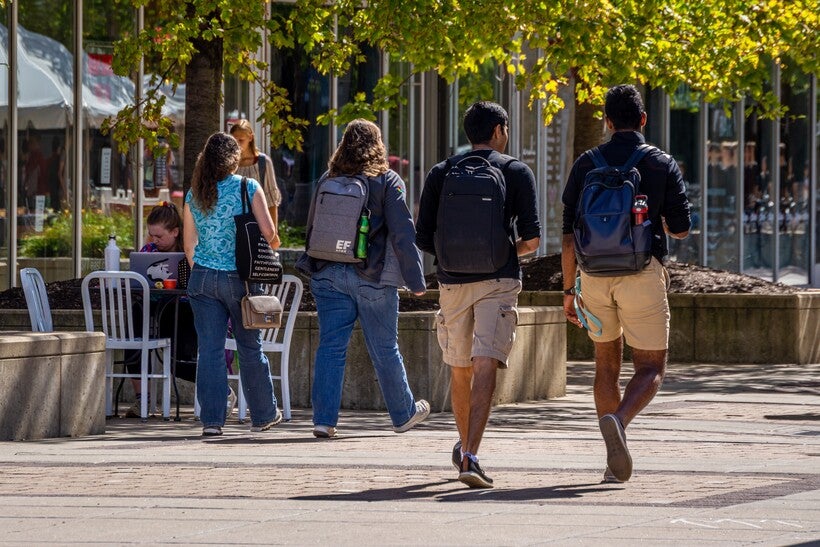 Wisconsin's public and private universities are planning to refund students tens of millions of dollars for housing and dining fees since campuses have advised students to stay home while classes move online to prevent the new coronavirus from spreading.

Rob Cramer, University of Wisconsin System vice president for administration, estimates the state's 13 universities and branch campuses will refund around $78 million for unused housing and dining services. He said refunds for residence halls and meal-plans aren't uncommon, but the magnitude of refunds going back to students this spring is unprecedented.

"That's about half of the revenue for residents halls and food service for spring semester," Cramer said.

WPR reached out to all individual UW four-year universities to get more perspective on the refunds. Of those that replied via email, UW-Green Bay estimated the smallest refund of about $2.1 million for housing and dining. UW-Milwaukee estimated a $7.5 million reduction in housing and dining revenues due to refunds.

Bob Hetzel, UW-La Crosse vice chancellor for administration and finance, said in an email that the campus would refund around $5.2 million for housing, dining and parking. He said around 90 students remain at UW-La Crosse's dorms and the refund total could change if they decide to leave campus. Hetzel said to make up the lost revenue, UW-La Crosse will delay renovation projects at two of its dormitories. He another renovation scheduled for the campus dining center will be delayed for two years as a result.

"The COVID-19 pandemic is having a significant impact on the university and the services it provides to UWL students," said Hetzel.

Al Thompson, the vice chancellor for student affairs at UW-Stevens Point, said campus housing and dining services are part of the auxiliary budget. Thompson said that means they operate like businesses, drawing their revenue from fees charged to students. He said this spring there will be an estimated loss of $3.8 million.

Thompson said refunding students who have moved off campus is the right thing to do, but it will have spillover effects in other parts of UW-Stevens Point's budget. The campus is currently engaged in a financial recovery plan and has made cuts to faculty and staff in efforts to find savings to offset declining enrollment.

He said the unplanned housing and dining refunds will eat into the campus' auxiliary reserves, which could make it harder to address mechanical issues in the future. He said there's a potential that a stimulus package approved by Congress and signed by President Donald Trump on Friday could help, but he isn't holding his breath.

"I'll be honest with you," Thompson said. "If we get it, that would be great. But I'm planning like there's no money coming our way."

According to the National Conference of State Legislatures, the Coronavirus Aid, Relief and Economic Security Act provides $30 billion for an education stabilization fund for states, school districts and institutions of higher education for costs related to coronavirus.

"But we cannot stress enough that overall, the assistance included in the measure for students and institutions is far below what is required to respond to the financial disaster confronting them," Mitchell said.

Private colleges and universities in Wisconsin are also refunding housing and dining fees to students.

La Crosse's Viterbo University President Glena Temple said they have around 600 students living on campus during a typical spring semester, but now only around 90 remain. She said the campus is still allowing students to apply for refunds, which will be given back early next month.

"That will be deposited into their student account in the first week of April and first applied to any outstanding bill in their account," said Temple. "But if that amount is above that, they will get a check cut in the near future."

Temple said because students are still applying for potential refunds, she couldn't share a grand total that Viterbo may give back.

"I will say it's substantia," said Temple. "But we also know the impacts on our families is substantial. So, we’re trying to do the right thing and support our students and families in any way we can in this difficult situation."

Ken Anselment, vice president of enrollment and communication at Lawrence University in Appleton, said nearly 100 percent of the campus' 1,500 students live on campus. But because the campus breaks up its academic year into three trimesters, he said Lawrence is able to exclude room and board charges for the upcoming term rather than refunding students.

Anselment wouldn't say yet how much revenue Lawrence could lose from the lack of room and board fees, but he said "it's a substantial financial hit," adding that it's the right thing to do for students and their families.

"Fortunately for Lawrence, we're in a pretty good position with resources," Anselment said. "I know everybody is watching the stock market right now. But our endowment started in a pretty strong position and it gives us some flexibility in these challenging times."