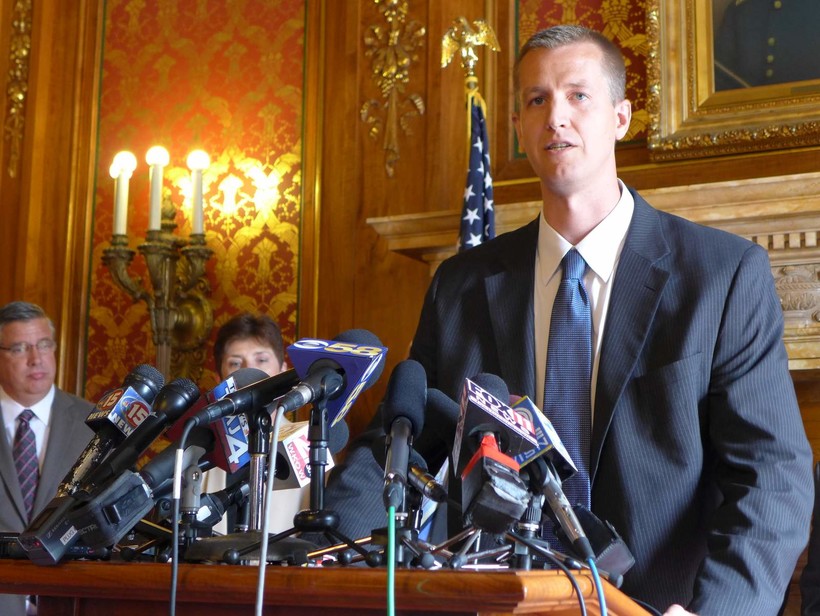 Assembly Republicans have unveiled a plan that would make sweeping changes to Wisconsin's tax system, raising taxes on gasoline to pay for roads while significantly cutting income taxes over the course of a decade.

The proposal by Rep. Dale Kooyenga, R-Brookfield, would move away from Wisconsin's longstanding progressive income tax toward a 3.95 percent "flat tax" for all taxpayers, regardless of how much they earn. Wealthier residents would see the largest tax cuts.

Assembly Republicans had promised for months to develop their own transportation budget as an alternative to the one presented earlier this year by Gov. Scott Walker, arguing Walker’s plan was unsustainable over the long term.

But the proposal they unveiled Thursday went well beyond that. Once fully phased in, it would decrease revenue to Wisconsin’s general fund by about $2.4 billion per year, according to the Legislature’s nonpartisan budget office.

Kooyenga said the income tax cut coupled with increased funding for roads would make Wisconsin more attractive to people and businesses considering where they want to live and invest.

"The plan that we’re putting forth today is a plan that says it is a no-brainer to invest in Wisconsin," Kooyenga said. "Wisconsin’s a place that is moving in the right direction."

"Here we are with six weeks left before a new budget is due and they unveil a plan that will not solve the transportation problem," Barca said. "Instead what they'll do ... is to lower taxes for the very wealthy."

Highlights of the GOP plan include:

At the same time, they would cut the state’s dedicated fuel tax by 4.8 cents. The overall tax hike would increase transportation funding by $382 million over the next two years. If the price of gas goes up, the tax would go up, too.

Decreased Taxes On Income: Wisconsin’s four income tax brackets would be replaced by a single 3.95 percent "flat tax" regardless of how much someone earns. The change would be phased in over the course of a decade. Wealthiest residents would see the biggest tax cut — they currently pay a 7.65 percent income tax rate.

Decreased Borrowing: Most of the new transportation revenue generated from the gas tax increase would go toward reducing borrowing. Assembly Republicans would cut borrowing by $300 million over the next two-year budget.

Eliminated Tax Credits: Several state tax credits would be eliminated, including the Married Couple Tax Credit, and an income tax credit for property taxes and rent.

Cutting The Minimum Markup: The plan would scale back Wisconsin's minimum markup on gasoline that prevents big retailers from selling gasoline below cost, a move long fought by smaller retailers. While Kooyenga argued that would reduce gas prices, the LFB did not project whether changing the law would cause gas prices to go down.

Ending The Prevailing Wage: Wisconsin’s prevailing wage, a base wage that contractors are required to pay people who work on state road projects, would be eliminated.

Opening The Door To Toll Roads: Wisconsin’s Department of Transportation would be authorized to toll any interstate road. The catch — and it’s a big one — is the state would need the federal government’s permission first.

Reducing State Engineers: The plan would cut 180 engineering positions at the state DOT. Kooyenga said that would cut costs as the state hired more private consultants, but a recent state audit showed engineering costs had grown as the state relied more on private engineers.

Optional Local Sales Taxes: Counties could impose up to a half-percent sales tax for maintaining and repairing highways. The sales tax increase would need to be approved by voters in a referendum.

Optional Local Wheel Taxes: Local governments would have to get voters permission first to enact a local registration fee, known as a wheel tax. Counties and cities that already had wheel taxes on the books before this year would get to keep them. That would end the wheel tax recently enacted by Milwaukee County.

Continued Uncertainty For Big Projects: Because the extra transportation revenue generated under this plan would primarily go toward reducing borrowing, many of the big projects delayed by Walker’s budget could remain on hold.

"We didn’t want to say that some projects are more important than others," said Assembly Speaker Robin Vos, of Rochester. "This does not solve transportation. It is fixing the problem that we have today."

The plan, which would be the most aggressive rewrite of Wisconsin’s tax code since Republicans took power in 2011, faces an uncertain future in the Legislature.

"The transportation and tax plan that Assembly leadership rolled out today contains a number of good ideas that are worth a closer look,” said Senate Majority Leader Scott Fitzgerald, of Juneau.

But Sen. Steve Nass, R-Whitewater, who has often sided with the governor when it comes to transportation funding, said he opposed the Assembly GOP plan. Nass referenced the way it would eliminate Walker’s more targeted tax cuts in favor of a flat tax.

"I can’t support adding the state sales tax on gasoline, and won’t support any budget that increases state income taxes on middle class families," Nass said in a statement.

Walker’s office did not immediately comment on the proposal. The governor has said that while he’s opposed to raising the gas tax, he’s open to increasing revenue for transportation as long as the state’s overall tax burden goes down.

Editor's Note: This story was updated at 8:15 p.m. Thursday, May 4, to include details of the proposed plan.