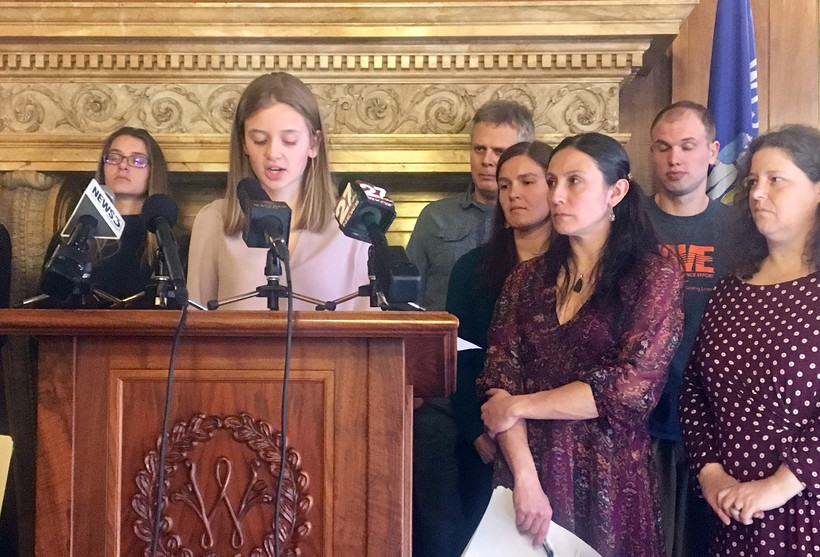 "We feel unsafe in our own schools and we will not stand for it any more," said Lydia Hester, a high school sophomore from Madison East High School, at a Capitol press conference Monday.

Hester, who protested at the Capitol last week alongside thousands of other high school students, said she and her peers aren’t satisfied with Walker’s proposals. They delivered a letter to the governor’s office last week asking for a number of other changes to state law.

"We hoped that our governor would listen to the students that are most impacted by this issue," Hester said. "Our schools are already filled with security and police and we don’t want our schools to become fortresses."

Hester said she has not received a response from the governor’s office.

Walker's package of bills does not include measures championed by student protestors, including expanding background check requirements for gun buyers or increasing the minimum age for gun purchases.

Instead, it proposes a $100 million grant program for building security and training programs at schools. The funds could be used for things like facility upgrades and hiring more school safety officers.

"We asked for stricter gun laws and you proposed only school safety measures," Hester said.

The governor traveled the state on Monday to promote his plan.

"Gov. Walker’s $100 million school safety plan focuses on ways we can help schools be safe, just like we did at the federal level ensuring that every airport and airplane were safe after 9/11," said Walker spokeswoman Amy Hasenberg. "The same thing needs to be true for all our schools."

At Monday’s press conference, the Wisconsin Gun Safety Coalition continued to push for additional changes, including bills that would institute background checks for private gun sales, restore a 48-hour waiting period for handgun purchases and ban bump stocks, which can make firearms deadlier.

"We’ve got to make fundamental change that addresses the root cause of these problems," said Rep. Chris Taylor, D-Madison.

Critics have argued the governor’s plan is "reactive," and doesn’t do enough to prevent gun violence.

Anneliese Dickman, policy and outreach specialist for the Wisconsin Anti-Violence Effort, argued limiting access to guns has been shown as the most effective means of preventing violence.

"These physical security measures have a negative impact on students perception of safety and increase fear," said Eugenia Highland, restorative justice director at YWCA Madison. "There is no learning when there is fear."

The state Assembly is scheduled to hear public testimony on the governor’s proposals on Tuesday.

The fate of the bills is uncertain in the state Senate, which is expected to take up similar, but not identical, measures this week. The proposals will not move to Walker's desk unless the Assembly and Senate pass identical bills.