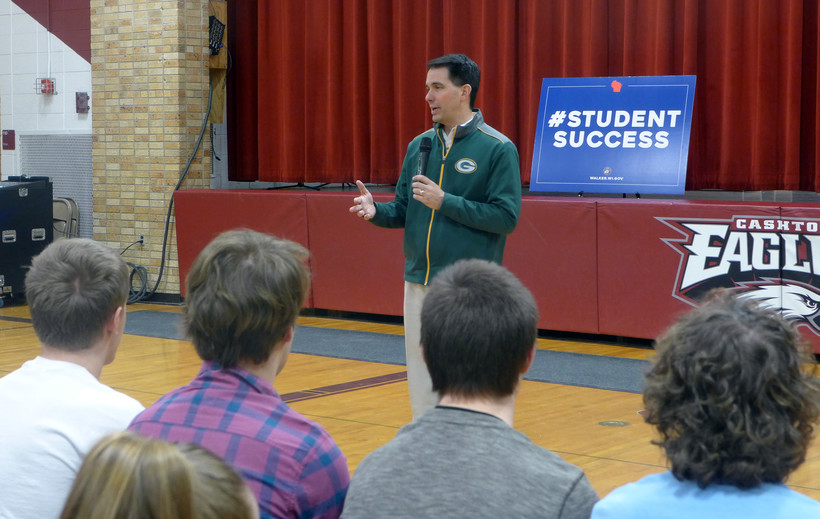 With No Specific Proposals On Firearms, Walker Says He Wants To Address 'Universal Safety' At Schools
By Hope Kirwan
Share:

Wisconsin Gov. Scott Walker said he’s not worried about getting his plan to address school safety passed before the end of the legislative session.

While the Assembly is expected to meet in special session next week, Senate Majority Leader Scott Fitzgerald, R-Juneau, said in a statement Thursday the Senate will consider measures that will "closely align with the governor’s objectives" as part of their regular session.

During an event to promote rural school investments Friday at Cashton High School, Walker said he's spoken with both legislative leaders about the bills.

"Whether or not the state Senate does it in a special session or attaches it to legislation that might be pending in regular session, either case to me, I just want them pass it next week," Walker said.

Walker’s proposal does not include mandatory universal background checks for firearm purchases or other measures supported by thousands of high school students who marched on the capitol earlier this week.

Walker said he wanted to take a broad approach to addressing threats to schools before the end of the legislative session.

"If we just focused on firearms, then the bomb threat that we saw in one of our school districts a couple of weeks ago in the state wouldn’t be something covered," Walker said. "We want to make sure that schools are safe, completely safe from whatever the threat might be, a firearm, an explosive, a knife, some other weapon out there. And to me, if we just focus on firearms, that reduces the ability for us to ensure that everyone is safe here."

But Democrats in the state have said the governor’s plan misses the mark.

"It’s disappointing to see Gov. Walker continue to ignore the pleas from Wisconsin students who want safe schools. For a plan that is supposed to be about gun safety, I don’t see anything in here that will keep deadly firearms out of the wrong hands," said Senate Minority Leader Jennifer Shilling, D-La Crosse, in a statement Thursday. "Failing to address the most pressing gun safety issues facing our students, families and communities will only lead to more tragedies."