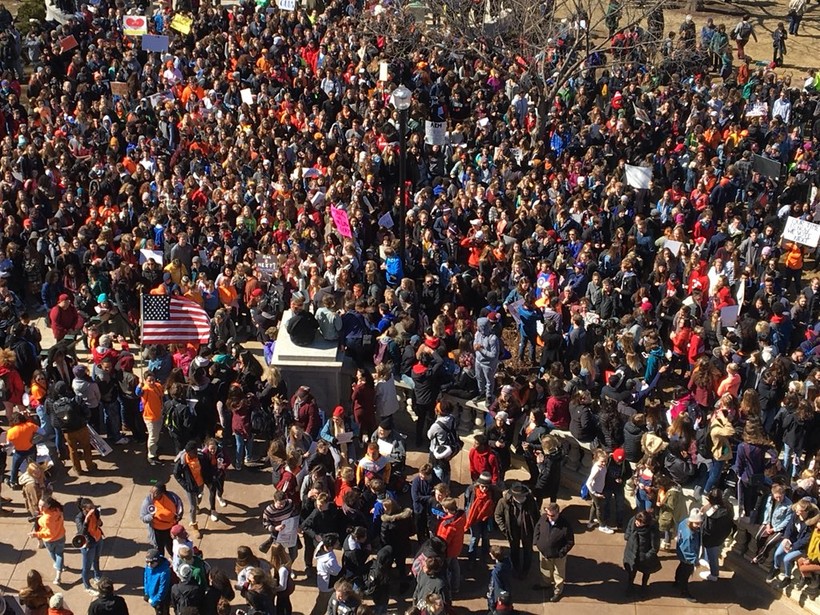 National Gun Protest Comes To Wisconsin As Students Walk Out

Thousands Of Students Attend Rally At State Capitol, Walk Out Across State
By WPR Staff
Share:

In the wake of the deadly school shooting last month in Parkland, Florida that left 17 dead, high school students across Wisconsin are walking out as part of a national protest calling for tougher gun safety regulations.

Students in Madison planned to leave class at 11 a.m., according to a Facebook page for the event. All area high schools then met at East High School and marched to the state Capitol to attend a rally with planned talks from state legislators, social activists, parents and students speaking about gun violence. "We are now here begging for our government to care as much about our lives as they do about their income from the NRA," Madison West High School student Allison Leyer told the crowd over a PA system.

As of about 1 p.m., the Madison Police Department estimated the crowd walking down E. Washington Ave. to be about 3,000 people.

Madison students were also circulating a letter they drafted compiling five demands for Gov. Scott Walker and the state Legislature.

Walker was not at the Capitol and was scheduled to be at a bill-signing event at Florence High School.

Governor Walker is leading on school safety and he is going to be with students today at Florence High School for a bill signing. Governor Walker believes that no child, parent, or staff member should fear going to school, which is why he will announce a comprehensive school safety package in the coming days.

Former state Rep. Kelda Roys, one of several candidates vying in the Democratic primary to challenge Walker addressed the crowd at the Capitol, saying she was there as, "a parent in support of my kids."

She spoke in favor of several gun control measures and praised the students.

"You are not asking for permission, you are demanding to be heard," Roys said. "And that is leadership." In Milwaukee, about 1,500 students at Rufus King International High School walked out and quietly marched around their athletic field Wednesday morning.

As students marched, the names of the 17 people killed at Marjory Stoneman Douglas High School were read. Following the march, students read poems, opposing the use of guns, or described how their friends or family members have been victims of gun violence.

Milwaukee Public School Superintendent Darienne Driver joined the students at Rufus King. She said gun violence at schools is what keeps her up at night, adding that she tries to promise families that their students, their children, will come home safely every night.

An spokesperson with Milwaukee Public Schools said dozens of other Milwaukee schools had similar walkout events.

Students in western Wisconsin were also getting involved.

Around 10 a.m. Wednesday, Onalaska High School held in-class safety instruction and discussions about what to do in the event of an active shooter situation, according to their administrative office.

Central High School students in La Crosse walked out at 10:00 a.m., the time many of the national walkouts were scheduled to take place. Central High School Principal Troy McDonald originally asked students to hold an in-school demonstration instead of walking out.

In the letter, McDonald wrote: "This student-led group is completely voluntary, as is participation in the planned event. Classes at Central High School will proceed as usual that day, and our schedule will not be altered to accommodate the event. Additionally, we will not condone any activity that involves students walking outside the school building and compromising their safety.  Students who choose to leave the building for such an event will be considered unexcused."

Participation in the national walkout extended to small rural schools as well. In far northern Wisconsin, around 100 of the Washburn School District’s roughly 600 students marched from the school to city hall, according to Olaf Kirsten, an English teacher at Washburn High School. He said administrators and teachers are proud of students who are stepping up to speak out about school safety and gun violence although Kirsten wished it was unnecessary.

"It’s sort of unfair to put the responsibility on students, on kids, to stop the violence when we as adults can enact laws that will have a much greater impact, I think," he said. "Yes, we do need to be kind to everyone in school and make sure everyone feels welcome so that we don’t ostracize kids and get them to the point of doing something crazy like this, but it’s also unfair to put the responsibility on kids."

The Washburn walkout was organized by Lily Eichorst and Emily Ekholm, 18-year-old seniors at Washburn High School.  The two said they felt it was important to mobilize and join the conversation to promote action on school safety in the wake of the Parkland shooting.

"We cannot forget that this happened," said Eichorst.

She said they would like to see Wisconsin lawmakers require universal background checks as part of any legislation that provides funding for armed guards in schools.

"It’s important that students know their voices can be heard if they stand up for what they believe in if they organize and choose to educate and inform others about what they’re dealing with right now," said Ekholm.

At North Waukesha High School, several dozen students with permission slips walked out, sitting in front of the building. Reporters were kept at a distance. Some students at Waukesha South high school walked out quietly.

Roughly a third of Waukesha middle and high school students participated in Monday’s call for action in some way, according to a district spokeswoman.

Most of the 400 participating students took part in activities indoors.

Students were able to work silently on assignments for 17 minutes, write letters to lawmakers, make suggestions to improve school safety or read short biographies of the 17 students killed in Parkland, Florida.

But activities in Waukesha also went beyond just students.

A rally organized by resident Tahra Loy who has three children in the school district, drew about 100 people according to her estimates.

Parents and members of the community demanded gun control at the school district’s headquarters.

"We live in a pretty conservative area here in Waukesha County, maybe just putting a community event up would support the kids within the schools," Loy said, explaining why she organized the event.

Judith Williams does not have children in the district but is a grandmother and says she wanted to support the community. She expressed frustration with the millions of dollars the National Rifle Association has spent on lobbying politicians.

"I’m hoping that we will go to the bottom of this sloppy mess and stop people supporting the NRA," she said. "We want that money to stop and we want people to get out of the NRA."

Editor's note: This story contains original reporting by Ximena Conde, Shawn Johnson, Danielle Kaeding, Hope Kirwan, Jenny Peek and Chuck Quirmbach, and will be updated throughout the day as the walkouts and rallies continue. It was last updated at 3:15 p.m., Wednesday, March 14, 2018.