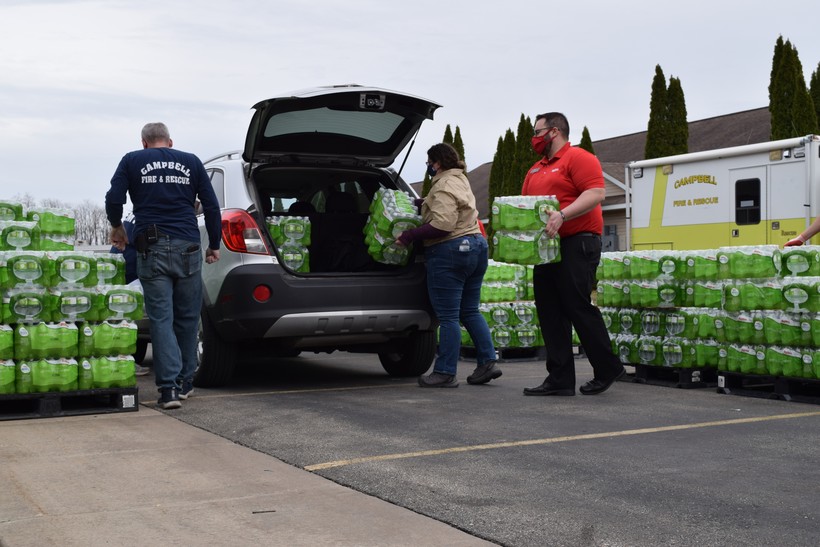 State environmental regulators expect to spend more than a half million dollars each year to provide bottled water to nearly 1,200 households on French Island due to concerns stemming from PFAS contamination.

The Wisconsin Department of Natural Resources and Department of Health Services issued a drinking water advisory in March, making bottled water available to as many as 4,300 residents on the island near La Crosse. The two agencies intended to keep the advisory in place for as long as six months, but they extended the advisory indefinitely in August.

"There isn't a timeline specified at which point we will no longer provide bottled water," said Dave Rozeboom, the DNR's project manager for French Island. "It will be an ongoing evaluation as we get more data and as the site investigation proceeds."

PFAS, or perfluoroalkyl and polyfluoroalkyl substances, are a class of thousands of so-called "forever chemicals" that have raised concern because they have been linked to an increased risk of kidney and testicular cancers, thyroid disease and fertility issues. The chemicals are found in firefighting foam and everyday products like nonstick cookware, and they don’t break down easily in the environment.

The DNR is providing bottled water to 1,162 households with money from the agency's environmental repair fund. Rozeboom said the DNR has spent just under $96,000 for services invoiced through the end of May, but the agency expects to spend $550,000 to $600,000 each year on French Island.

"We had to defund other projects in the state in order to fund bottled water for French Island. So, it is a strain on our fund, and we feel, though, that it's necessary that we continue to fund this project," said Rozeboom. "So, we will do so for the foreseeable future, as long as we have the funding to support that."

The agency receives an allocation from the state of roughly $2.3 million each fiscal year for the fund, according to figures provided by the DNR. The money pays for investigation and cleanup of polluted sites where a responsible party does not exist, as well as temporary emergency water.

Health officials recommended the advisory remain in place after reviewing PFAS results in private wells on the island, which showed widespread low-level contamination and higher levels in localized areas.

Testing shows 31 percent of samples (165 out of 539) from private wells showed levels of PFAS in drinking water deemed unsafe by state health officials. Rozeboom said regulators didn't feel it was wise to revise the advisory given the potential for fluctuation in levels of the chemicals. 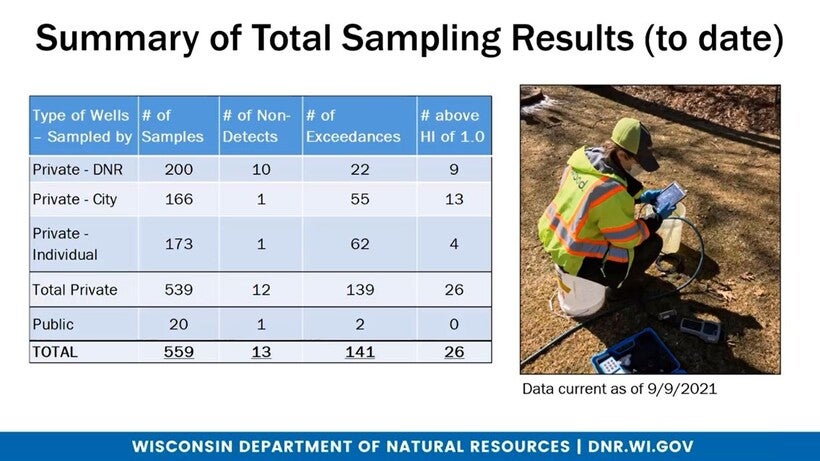 Data courtesy of the Wisconsin DNR

French Island is the largest recipient of bottled water from the DNR. The agency is also providing water to the Town of Peshtigo, which is the site of the state's most complex investigation into PFAS contamination.

Jurisdiction over the island is split between the Town of Campbell and the city of La Crosse. State environmental regulators would like Campbell to obtain municipal water on their own or from a neighboring city like La Crosse. But town leaders are reluctant to seek drinking water from the city after the DNR ordered La Crosse to investigate in 2019 due to the presence of PFAS in city wells.

"Now, we know that the city of La Crosse has three contaminated municipal wells on the island, and I would proffer that residents would not be keen to hook up to municipal water that they know is contaminated," said Lee Donahue, a town board supervisor.

Two of the city wells have been taken offline, but another remained online for emergency water use this past summer. The contamination is believed to stem from testing or use of firefighting foam containing PFAS at the La Crosse Regional Airport on French Island. La Crosse filed a lawsuit against nearly two dozen chemical companies earlier this year, arguing manufacturers of firefighting foam knew the risks associated with PFAS.

The Town of Campbell is currently examining options for permanent safe drinking water.

"It's definitely a huge benefit that we've had access to safe drinking water that has been provided by the DNR, but we know that that's not a long-term solution," said Donahue.

Donahue said the town will be included in a national survey led by the U.S. Geological Survey to sample for PFAS and hundreds of other contaminants. The goal is to sample 10 different sites on the island. She said it’s important to understand what contaminants exist in groundwater to ensure that a long-term solution would address any potential health impacts.

Federal and state standards for PFAS are lacking

The U.S. Environmental Protection Agency first became aware of the health hazards of PFAS more than two decades ago, but federal standards are currently lacking for the chemicals. The EPA has issued a health advisory level of 70 parts per trillion, but it could be another six years before the agency develops national standards in drinking water.