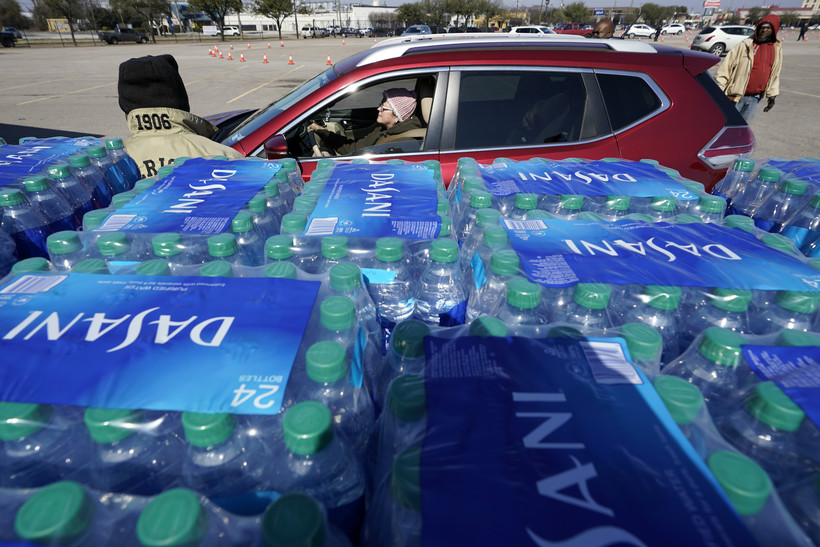 Water is stacked at a City of Houston water distribution site Friday, Feb. 19, 2021, in Houston. The drive-thru stadium location was setup to provide bottled water to individuals who need water while the city remains on a boil water notice or because they lack water at home due to frozen or broken pipes. David J. Phillip/AP Photo

State health officials have issued a water advisory for thousands of French Island residents due to concerns stemming from PFAS contamination of private drinking water wells.

Several state agencies are making free bottled water available to as many as 4,300 residents who rely on 1,200 private wells, according to the Wisconsin Department of Natural Resources. The DNR is working with the Wisconsin Department of Health Services (DHS), National Guard and Wisconsin Emergency Management to provide water supplies to residents. The advisory is expected to remain in place for at least the next 90 days.

The DNR said Thursday that 185 private wells sampled by the agency and residents show PFAS concentrations in all but one deep water well. Around one-third of those samples — 61 wells — had PFAS levels exceeding the state's recommended groundwater standard of 20 parts per trillion.

"DNR and DHS will continue to work with the residents of French Island, the town, city and county officials to aid them in providing emergency safe drinking water to address these concerns, and to ultimately identify the sources of PFAS on the island and to take actions to provide permanent water and the cleanup of soil and groundwater contamination," said Darsi Foss, administrator of the DNR's environmental management division.

The city of La Crosse is part of an ongoing investigation into PFAS contamination on the island stemming from the La Crosse Regional Airport. The DNR launched the investigation last year after the DNR flagged two city wells for the presence of PFAS, which have since been taken out of service.

Contamination has been identified in the soil and groundwater on the airport’s property and within groundwater south of the airport due to the use of firefighting foam that contains PFAS. The La Crosse Fire Department tested firefighting foam containing PFAS at burn pits on the site from the 1970s to the 1980s. The foam was also used to respond to airplane crashes on the site over the decades.

State health officials and environmental regulators say a drinking water advisory for the area is justified because the source or sources of contamination outside of the city's current investigation area are currently unknown.

"This advisory allows the state to take actions to provide an alternative drinking water supply in order to prevent potential PFAS exposures among French Island households, including those that contain vulnerable individuals or lack the means to pursue testing and mitigation," said Curtis Hedman, DHS toxicologist.

La Crosse has been providing bottled water to 54 residents whose wells had PFAS levels exceeding the state’s recommended groundwater standard. The DNR will provide bottled water to residents in the area who are currently not receiving water from the city, which could cost the agency $200,000 or more depending on how many people request it.

The Milwaukee Journal Sentinel reported on Friday that La Crosse Mayor Tim Kabat declined to provide bottled water to residents who had PFAS levels below the state’s recommended standard even though state regulators urged them to do so.

State agencies will provide cases of bottled water through donations from Hy-Vee, Kwik Trip and CVS that will be available for pick-up from 3 p.m. to 6 p.m. Thursday at Olivet Lutheran Church and the Days Inn on French Island.

Residents with private wells will be offered the option of receiving five-gallon containers of bottled water that will be delivered to their homes. The state is contracting with Culligan to provide bottled water supplies.

Perfluoroalkyl and polyfluoroalkyl substances, commonly called PFAS, have raised concerns over their impact on public health. The chemicals are found in firefighting foam and everyday products, and they don't break down easily in the environment. PFAS has been linked to health problems, including cancer, thyroid disease and reproductive issues.

The City of La Crosse recently filed a lawsuit against 23 chemical companies that include manufacturers of firefighting foam, claiming they knew about the harmful effects of PFAS in their products without informing customers.

The DNR is analyzing 92 more private well samples and will decide whether to continue or modify the drinking water advisory based on those results, which are expected within the next 30 days.