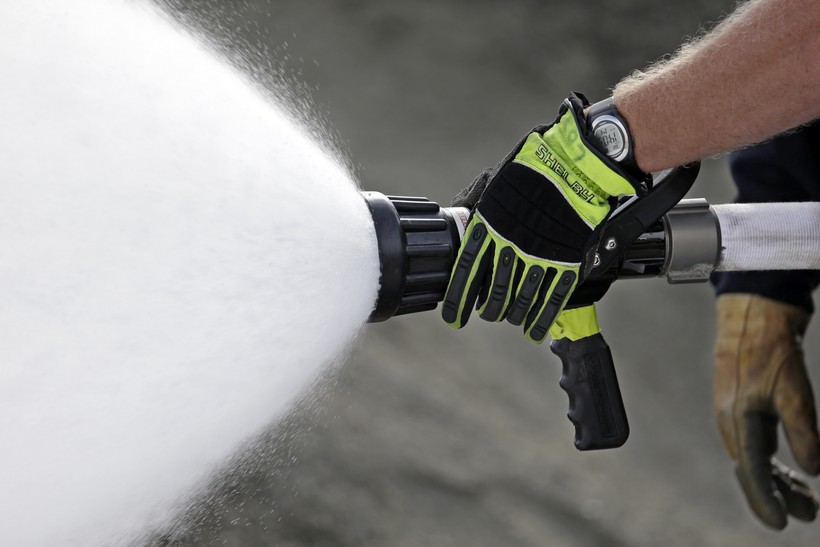 A Seattle firefighter sprays foam during a specialized training session on how to respond to incidents involving oil trains Wednesday, Oct. 8, 2014, in Seattle. Blaine Thompson/AP Photos

The suit filed by Milwaukee-based law firm Crueger Dickinson and firm Napoli Shkolnik in La Crosse County Circuit Court alleges that cities like La Crosse used aqueous firefighting foams (AFFF) that contained perfluoroalkyl and polyfluoroalkyl substances (PFAS) for decades without any knowledge of the harmful effects the chemicals pose to public health. They say chemical manufacturers like 3M, DuPont and Tyco Fire Products knew of the risks associated with PFAS.

"Defendants were aware since the 1960s and 1970s that PFOA and PFOS were toxic, do not biodegrade, are persistent in the environment, move easily through soil and groundwater, and pose a significant risk to human health and health and safety; yet Defendants elected to manufacture and sell products utilizing these chemicals without warning their customers, placing profits over public health and safety," the complaint reads.

The lawsuit targets 23 companies that include 3M, DuPont and Chemours, as well as eight manufacturers of firefighting foams known to contain PFAS. PFAS chemicals have raised concerns because they don't break down easily in the environment. Studies have linked them to harmful health issues, including thyroid disease, reproductive health issues and kidney and testicular cancers.

The lawsuit is among thousands of legal challenges that have been filed across the country by local governments, citizens and firefighters due to PFAS contamination. Attorney Erin Dickinson, partner and co-owner of Crueger Dickinson, told WPR the lawsuit seeks to hold those companies responsible.

"The city has already incurred significant costs in trying to protect its residents in having to shut down wells and having to test and monitor wells for PFAS, in providing bottled water to affected residents," said Dickinson. "But, it is also to ensure that the companies causing any of this contamination help pay for the solution and the cleanup on a going forward basis. And, obviously, that is just as important as the costs the city has already incurred and probably more so."

The city is part of an ongoing investigation into PFAS contamination at the La Crosse Regional Airport on French Island. The investigation began after the Wisconsin Department of Natural Resources flagged two city wells for the presence of PFAS last year, which are no longer being used. The La Crosse Fire Department tested firefighting foam containing PFAS at burn pits on the site from the 1970s to the 1980s.

The city hired an environmental consultant to conduct well and groundwater sampling that began in October 2020 within the Town of Campbell near the airport. More than one-third of wells tested last fall — 40 of 109 private wells — showed PFAS levels above the state's recommended groundwater standard of 20 parts per trillion.

La Crosse Mayor Tim Kabat said the city has already incurred several hundred thousand dollars worth of costs related to the investigation. He said the lawsuit was a significant step toward holding companies accountable for PFAS pollution.

"We are taking this very seriously, and we've been working it seems like almost around the clock nonstop on this issue now for months. We've been following the science and following the Wisconsin Department of Natural Resources and our health advisors on our testing program — on providing bottled water to those private wells that exceed the 20 parts per trillion recommended standard," he said.

The La Crosse Regional Airport is currently required to store firefighting foam containing PFAS as part of Federal Aviation Administration regulations. City officials have said that would only be used in emergencies. The FAA is required to come up with an alternative to PFAS-containing foam by October of this year.

Attorney Tim Jacobson with the law firm Fitzpatrick, Skemp and Butler has served legal notices to the city to preserve the right of around 225 residents in the Town of Campbell to file a lawsuit against La Crosse for PFAS contamination. He thinks it’s appropriate for the city to sue those chemical companies, but he added the lawsuit was not filed to benefit the Town of Campbell.

"It doesn’t change the dynamic in terms of the relief that our clients on French Island will be seeking," said Jacobson.

He said residents want to see a permanent supply of clean drinking water in addition to compensation for health issues related to PFAS exposure and a decline in their property values. La Crosse's mayor said city officials hope a settlement would help bring a permanent source of safe drinking water for island residents.

Yet, Jacobson said PFAS pollution on French Island is a devastating situation and urged public officials to step up and start addressing these chemicals.

The Wisconsin DNR had crafted an emergency rule to enforce restrictions as part of a bill signed into law last year that bans the use of firefighting foam containing PFAS except in emergencies and other limited circumstances. But, Republican lawmakers weakened that rule and the agency’s ability to regulate treatment of such foam.

The city is among more than 100 local governments that have filed lawsuits against chemical companies over their ties to PFAS contamination.

The firms who filed the lawsuit on behalf of the city were also a part of the $17.5 million class action settlement with Tyco Fire Products and two other companies over widespread PFAS contamination stemming from the use of firefighting foam in the Peshtigo and Marinette areas.

The multi-million dollar settlement reached with Tyco, Chemguard and ChemDesign will compensate Peshtigo residents for exposure to PFAS in private drinking water wells, property damage and individual disease claims due to the use of firefighting foams.

There have been mounting legal challenges over PFAS contamination as the dangers of the chemicals have become more widely known. In 2018, Minnesota settled its lawsuit against 3M for $850 million. In 2017, Dupont resolved a lawsuit in West Virginia for $671 million over PFAS contamination that has been detailed in the film "Dark Waters."

When wells are affected by PFAS, damages can range up to $10 million per well, according to Paul Napoli, the city's co-lead counsel. He added that the cost to remediate the airport and surrounding property could be tens of millions, if not up to $100 million.

"More and more cities and airports and water providers are finding this to be a problem as state governments and the federal government start to identify the uses around the country and develop regulations," said Napoli.

However, no state or federal standards currently exist for the chemicals. Last year, the state Department of Health Services recommended a combined groundwater standard of 20 parts per trillion for two of the most common PFAS chemicals: PFOA and PFOS. State health officials expanded that recommendation to include four additional PFAS substances in November. The U.S. Environmental Protection Agency has set a health advisory level of 70 parts per trillion for PFOA and PFOS.