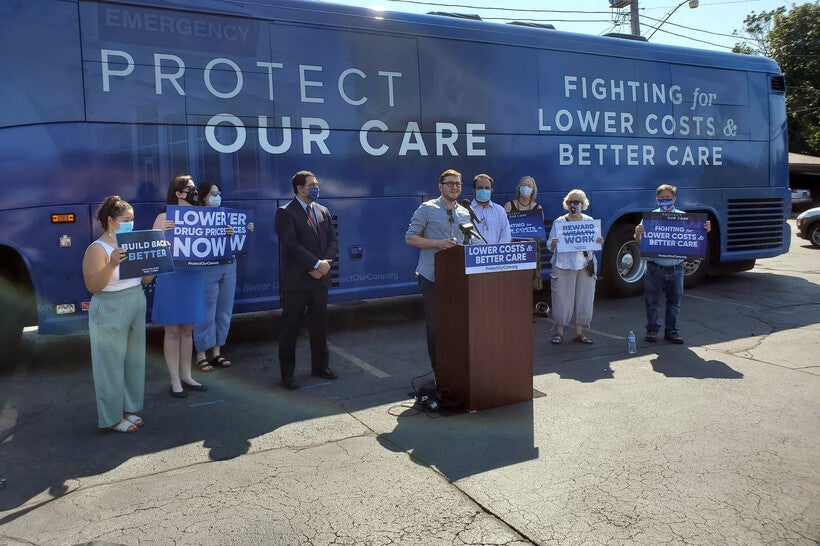 Dustin Klein, a Milwaukee resident, talks about his experiences with hemophilia during an event Friday, Aug. 20, in Milwaukee, Wisc. Health care advocates joined with state and Milwaukee officials from the Democratic Party to call for lower health care costs in Wisconsin and across the United States. Christine Hatfield/WPR

Health care advocates joined with state and Milwaukee officials from the Democratic Party to call for lower health care costs in Wisconsin and across the country.

The event, held Friday in the parking lot of the Sherman Phoenix shopping mall, was a joint effort of political advocacy organizations Protect Our Care Wisconsin, Citizen Action of Wisconsin, and Building Back Together.

Dustin Klein, a Milwaukee resident, highlighted the cost of treatment for hemophilia, a condition that limits the ability of blood to clot, which can lead to even small cuts being life threatening.

"If I get hurt, I'm going to be dealing with an injury that's going to last about as long as about three to four months if it goes untreated," said Klein.

Klein said the cost of care to get treatment for hemophilia can add up to hundreds of thousands of dollars over time.

"I know kids that I went to summer camp with, because we had a hemophilia summer camp, that would regularly go through about $2 million a year in insurance," said Klein. "If they, you know, met their lifetime caps back in the day, they would be thrown off of their insurance."

Klein said while the Affordable Care Act and changes to Medicare and Medicaid have led to changes for the better, millions of Americans continue to worry about paying for medications. The global policy think tank Rand Corp. said in a report released in January prescription prices in the United States are, on average, about 2.56 times higher than they are in dozens of other nations.

Efforts from Democrats such as Gov. Tony Evers to expand Medicaid in Wisconsin have been rejected numerous times over the years by Republicans who hold power in the state Legislature. Evers proposed a bill that would have allowed for the expansion when he called a special session of the Legislature in May, but the Assembly and Senate took no action before adjourning. 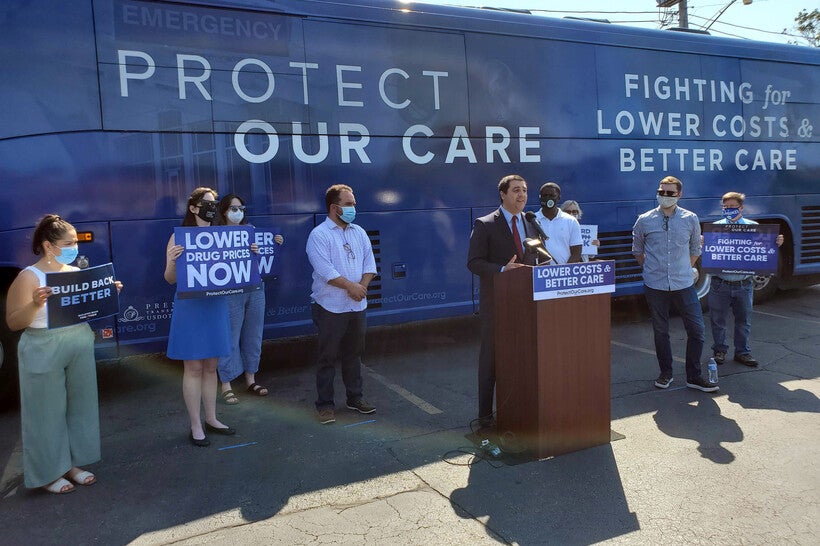 Wisconsin Attorney General Josh Kaul speaks during an event Friday, Aug. 20, in Milwaukee, Wisc. Health care advocates joined with state and Milwaukee officials from the Democratic Party to call for lower health care costs in Wisconsin and across the United States. Christine Hatfield/WPR

Wisconsin Attorney General Josh Kaul attended the event Friday and said while access to affordable health care "is always important," events such as the opioid crisis and the COVID-19 pandemic have brought the problems to the forefront.

"We are now about a year and a half into a pandemic that has fundamentally changed so many people's lives," said Kaul. "It has exacerbated challenges."

Kaul criticized the Legislature for its inaction, saying the state has "been fighting with one hand tied behind our back."

"We need to keep fighting to expand Medicaid in Wisconsin," said Kaul. "If we do that, we will not only cover more people, but we'll save the state an enormous amount of money that we can reinvest in strengthening our communities."

In 2019, Kaul got Wisconsin removed from a federal lawsuit that aimed to overturn the ACA. The U.S. Supreme Court ultimately kept the federal health care law in place.

Kaul highlighted efforts in Washington from legislators such as Democratic U.S. Sen. Tammy Baldwin, who represents Wisconsin, to bring coverage to more Wisconsinites. Baldwin is behind a proposal introduced last month to bring federal health insurance for low-income residents to states that have not expanded Medicaid.

"By either expanding Medicaid, the best option, or seeing Congress pass this legislation, we will take a significant step in the right direction for the health of Wisconsinites and the safety and strength of our communities," said Kaul. 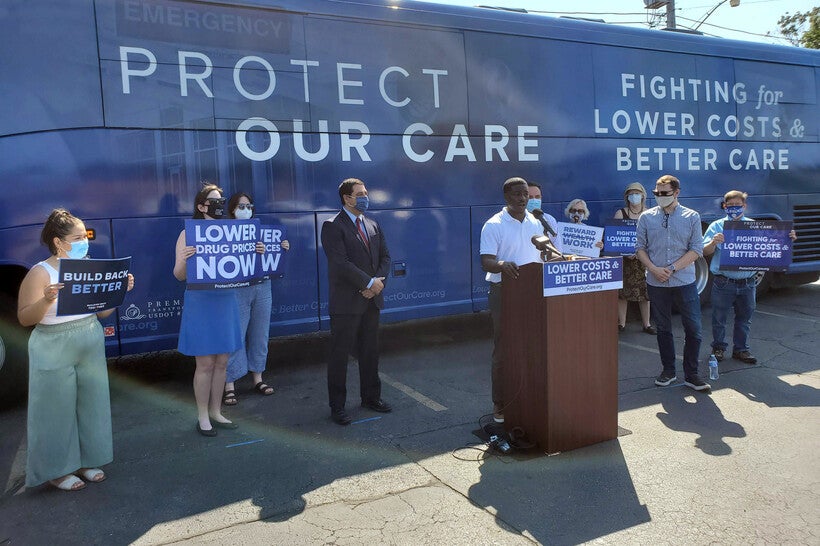 Milwaukee County Executive David Crowley speaks during an event Friday, Aug. 20, in Milwaukee, Wisc. Health care advocates joined with state and Milwaukee officials from the Democratic Party to call for lower health care costs in Wisconsin and across the United States. Christine Hatfield/WPR

Milwaukee County Executive David Crowley highlighted the effects of racial inequities in health care, saying the expansion of Medicaid would help reduce those gaps. The county declared racism as a public health crisis in 2019.

"Historically, communities of color have disproportionately ... (found) themselves facing many barriers to access as well as getting the care that they need compared to white residents throughout our state," Crowley said Friday. "In order for us to really break down these racial health disparity gaps that exist, we have to work with shifting the bulk of our residents, and really meeting them where they are within our community, and ultimately preventing poor health outcomes for all of our residents."

Laura Packard, the founder of the nonprofit Health Care Voices, spoke about her experience with a stage 4 cancer diagnosis, saying the ACA saved her life.

"Too many people are not able to afford the health care they need," said Packard. "We the taxpayers fund the innovations, and then big pharma charges again and again for people to access them, but we can do something about it."

The Milwaukee event was part of a national bus tour organized by Protect Our Care to advocate for health care issues. The campaign was also set to visit Madison Friday.