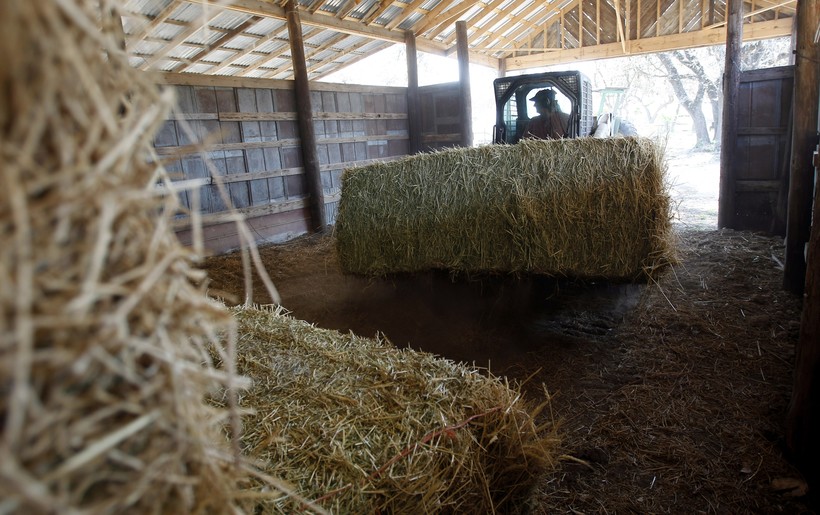 Some Wisconsin Producers Worried About Tight Supply Of Hay For Livestock

Connie Wastlund owns two horses on a hobby farm in New Lisbon, Wisconsin and she usually buys all the hay she needs for winter from a neighbor. But Wastlund said she can't find enough hay to buy this year — and she's not alone.

Livestock owners and feed suppliers across Wisconsin are reporting local shortages of hay this winter.

"Even the feed stores that will have hay right up through April have been out for a month," Wastlund said.

Wastlund said flooding in late August contaminated some hay fields in her area, making them unusable for some livestock. The wet weather also meant farmers had a tough time cutting hay this season.

Wastlund said some of her neighbors anticipated a tight supply of hay going into the winter months, sending cattle to market early or not selling any of their hay crop.

Jeremy Cordts, manager of Reynolds Feed & Supply in Cobb, Wisconsin said his business was also prepared for a limited quantity of hay on the market.

"Back in early spring, basically all the surplus that was in storage had all been fed up. So April, May, we already knew things might be short this year," Cordts said.

While most hay is bought and sold locally, Cordts said his business has seen new interest from producers in northern Wisconsin.

Richard Halopka is a crops and soils agent with University of Wisconsin-Extension in Clark County. He said dryer weather in the northern region meant some producers came up short on this year’s hay crop.

But Halopka said he doesn't think there is a shortage of hay in the state.

"There's a large amount of hay out there that is probably lower quality than a lot of people would like to purchase," Halopka said. "I drive around a lot here on back roads and there's a lot of hay sitting on fence lines. Now again, that hay is probably not the quality of hay we want to put in front of livestock."

Because of the difficult growing conditions, Halopka thinks producers are holding on to the limited supply of high-quality hay in the state in hopes of a better price.

Hay prices have increased since October, but Halopka said the biggest price increases have been on low-quality forage.

"Where you’re really seeing a response in price is that lower quality hay. What was $50 per ton on the first of October is now approaching $100 per ton," Halopka said.

Cordts said hay prices in his area are above normal, but producers are willing to pay a premium because the supply is so tight.

"The only positive thing in the ag economy right now is that hay is worth good money," Cordts said. "But on the same end, you've got farmers with horrible milk prices, horrible cattle prices, corn and bean prices aren't much, and those are the same people who gotta buy hay back."

Wastlund said her family has had to make some tough financial decisions because of the increased hay prices.

"Unfortunately, it means some of my bills aren’t getting paid in full every month. Some of things we had planned to do this winter, we’re not going to be able to do," Wastlund said.

She said she’s feeding her horses in smaller quantities to avoid waste, but she’ll have to keep looking for more hay to get her through the winter.