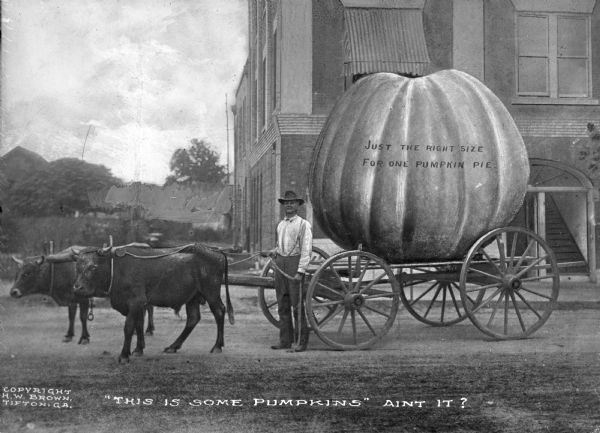 A Short History Of Pumpkins

October is synonymous with pumpkins. The sweet bright orange fruit has become a symbol of the fall and has been an important part of the season in Wisconsin and North America for centuries.

Indigenous to the western hemisphere, pumpkins — or at least the seeds of pumpkins — have been an important food source for thousands of years in the Americas. The flesh of most wild pumpkins was so bitter that most cultures consumed the seeds only until cultivation yielded sweeter varieties of squash.

Nearly all European explorers and settlers remarked on the pumpkins they encountered in the Americas. Samuel de Champlain and Jacques Cartier saw pumpkins in Canada (then known as New France) in the 16th and 17th centuries. Zebulon Pike commented on the Pawnee method of drying pumpkin slices in the sun to reduce its size in the early 19th century. Missionaries Florantha and Granville Sprout recounted using local pumpkins for pies for Ojibwe children on Madeline Island in 1838.

Monster produce drew just as much attention 100 years ago as it does today. Tall-tale postcards like the one above often featured mammoth produce as an enticement for settlers and tourists to visit towns across the nation in the early 20th century. But real big pumpkins were just as appealing.

On Basswood Island in 1877, Richard McCloud, the first person to claim a homestead on the Apostle Islands, allegedly produced a pumpkin that weighed 81 pounds. His farm, called a "wonderful place for farm products of mammoth proportions" by the Bayfield Press also yielded 4 foot long cucumbers, 3 pound tomatoes, and monster potatoes. Vegetables from McCloud's garden frequently merited mention in the local newspaper.

Pumpkins had largely disappeared from the table by the late 19th century, relegated to decoration rather than dinner. Pumpkin eating has seen a bit of a revival in recent years with the popularity of "pumpkin spice" everything, though most of these items don't actually include any pumpkin.