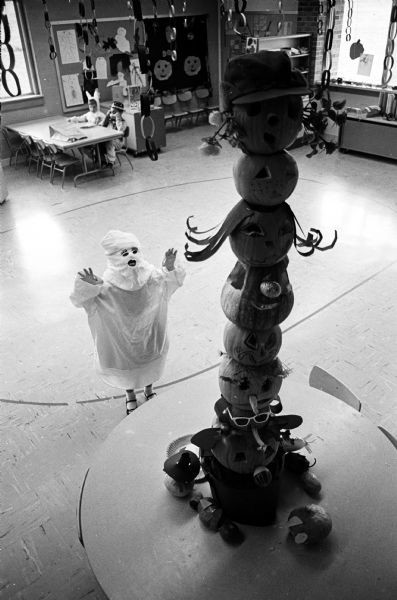 The Story Of The Jack In Jack-'O-Lantern

Pumpkins are one of the most recognizable symbol of Halloween, adorning porches, windows and in the above image, a classroom in Madison. Many a Wisconsin fall would not be complete without a trip to the pumpkin patch.

But the carving tradition began not with pumpkins but with turnips and the Irish story of "Stingy Jack."

When Jack finally died, God wouldn’t allow him into heaven and the Devil, true to his word, wouldn’t allow Jack into hell. So he sent Jack off with only a burning coal to light his way. Jack put the coal into a carved turnip and has been roaming the Earth ever since, becoming known as "Jack of the lantern" or "jack-o-lantern."

To ward off Stingy Jack and other unsavory characters, people began carving scary faces into vegetables and placing them near windows and doors. Immigrants brought this tradition to North America where they discovered pumpkins, a fruit native to America, which also made an exceptional canvas for carving.

We don't know when the first pumpkin was carved in Wisconsin but we do know that settlers enjoyed pumpkin pie fairly early on. Giant pumpkins also caught on quickly, too, with one grown on the Apostle Islands in 1877 reaching 81 pounds.