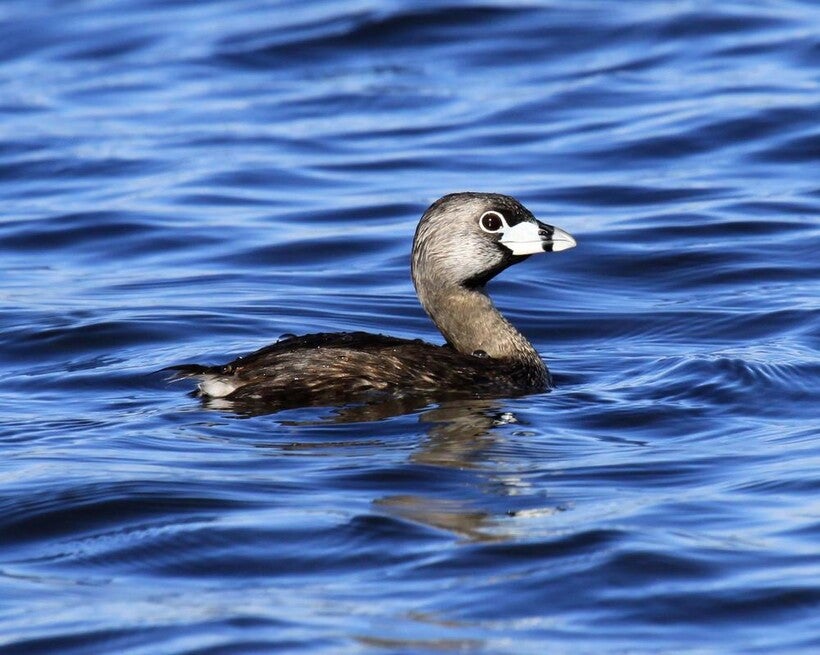 The pied-billed grebe is among 14 marsh bird species that researchers considered as they sought to identify the most important coastal wetlands for marsh bird conservation. Photo by Laura Erickson courtesy of the University of Minnesota

A new study has identified the most important coastal wetlands to focus on to preserve more than a dozen species of marsh birds on the Great Lakes.

Multiple groups conducted the collaborative research effort, which included researchers from the National Audubon Society, the University of Wisconsin-Green Bay and the Natural Resources Research Institute at the University of Minnesota-Duluth. The science journal Biological Conservation recently published their findings.

Coastal wetlands perform critical ecosystem services that include providing flood protection, sequestering carbon and filtering out pollutants. They also provide a home to many species of birds, fish and wildlife. Despite that, more than half of coastal wetlands worldwide have declined, along with many bird species that thrive within those habitats.

Marsh birds are an indicator species on the health of coastal wetlands, according to Gerald Niemi, an emeritus professor and NRRI ornithologist. He said researchers identified the most significant wetlands in the Great Lakes for 14 marsh bird species as part of an effort to improve biodiversity and manage future protection and restoration efforts.

"It gives us a strategy for which ones seem to be most important at least for birds and presumably for other values of those wetlands, such as for fish and fish food of aquatic insects, and in the plant communities as well," Niemi said.

Researchers used survey data collected from 2011 to 2017 from the Great Lakes Coastal Wetland Monitoring Program for 14 marsh bird species as the basis for prioritizing wetlands. Those species appear to be the most impacted by changes in coastal wetlands, according to Bob Howe, director of the Cofrin Center for Biodiversity at UW-Green Bay.

The amount of impervious surfaces in the surrounding area and the availability of open water or herbaceous wetlands were the biggest drivers that determined the abundance of marsh birds across the 14 species. Around 239,000 hectares, or more than 500,000 acres, of coastal wetlands were ranked in the top 20 percent of high-priority wetlands across all five Great Lakes. Wetlands along Lakes Ontario, Erie and Huron had higher priority rankings.

Yet, researchers found less than half, or 42 percent, of all high-priority wetlands were protected.

"And that means that we have a lot of work to do in providing some kind of protection to that other 58 percent that are not currently protected," said Howe.

Researchers hope the findings will provide incentive to improve coastal wetland conservation, according to Joanna Grand, the study's co-author and senior scientist with the National Audubon Society.

"The spatial mismatch between ecological value and protection status is an opportunity to improve the conservation of marsh birds in a region where wetland loss and degradation remain high," Grand said in a news release.

Researchers recommend high-priority wetlands they've identified that lack protection be considered as part of future conservation efforts. That would include wetlands that are threatened by intense human activity near Green Bay and Detroit, Michigan, along with other areas that see low land-use impacts along the northern shore of Lake Michigan.