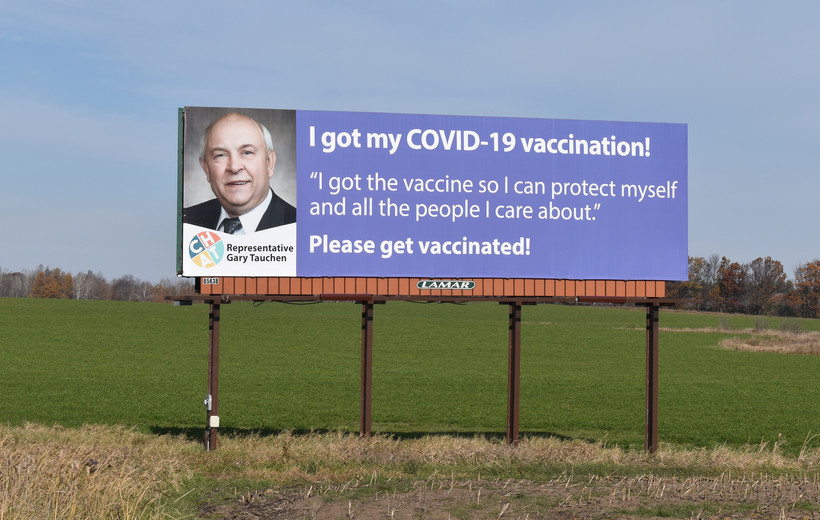 Rep. Gary Tauchen, R-Hartland, is part of a new campaign in one of the state's least-vaccinated counties aimed at persuading rural residents to get the COVID-19 vaccine. Rob Mentzer/WPR

A new campaign in mostly unvaccinated Shawano County seeks to persuade residents to get vaccinated against COVID-19
By Rob Mentzer
Share:

Just outside of Shawano, a billboard advertises the COVID-19 vaccine.

"I got the vaccine so I can protect myself and all the people I care about," it reads, alongside a photo of state Assembly Rep. Gary Tauchen, of Hartland.

Tauchen is a Republican, and his district is a conservative area. And like other rural parts of the state, uptake of the vaccine has been slow. Only 42 percent of Shawano County residents are fully vaccinated, according to state data, making it the county with the fifth-lowest vaccination rate in Wisconsin.

Tauchen, who is part of a coalition of leaders called the Community Health Action Team that is behind the new public messaging campaign, wants to see that change.

"I'm a farm boy by trade," Tauchen said. "We don't vaccinate part of our herd, we vaccinate the whole herd. And I think it's important to get as many people vaccinated as you can."

Tauchen is one of a relatively small number of elected Republican leaders in Wisconsin who've been willing to be a part of campaigns to publicly encourage vaccinations. GOP leaders like U.S. Sen. Ron Johnson have spent months promoting false or misleading information about the vaccine. In August, state Senate Majority Leader Chris Kapenga, R-Delafield, encouraged hospital workers to defy their employers' vaccine mandates.

Public health leaders say the politicization of the vaccine campaign has had deadly results.

That's why the Community Health Action Team, which is organized by the health system ThedaCare, launched the new campaign using grant money from the state Department of Health Services. In addition to the billboards, it includes a series of radio ads in which a Shawano parent and a school board member urge vaccinations as a way to keep schools open; and a doctor describes overloaded conditions at the local hospital.

"So, when will this pandemic end?" the ads say. "It'll end when those who are able to get vaccinated, are vaccinated."

Public health campaigns promoting the COVID-19 vaccine have been going on for months. DHS paid for billboard campaigns across the state that featured local health providers — doctors and nurses who might be recognizable, trusted sources of information to people in their communities. Like most of the country, Wisconsin saw a spike in vaccinations when they became widely available in the spring, followed by a precipitous decline in June. In early November, the state was averaging about 3,600 new vaccinations per day.

Julie Chikowski, vice president of ThedaCare Medical Center-Shawano, acknowledged persuasion happens slowly, and any gains from the new campaign in the Shawano area are likely to be incremental. But she said the group also made efforts to tailor their messages to that specific community.

"We tried to make it more about keeping the schools open, keeping the businesses open," Chikowski said. "We're not saying, 'You need to go get a vaccination,' because that's a huge turn-off for the community ... (People) want to understand: What's in it for Shawano?"

Chikowski said she hopes those messages — and the messengers they've chosen — can break through the politicized nature of the vaccine debate, at least for some people.

"The goal is to try to open minds, get the politics out of the vaccination process, and have people really look at the science," she said.

Tauchen, who was first elected in 2006, announced in January he would not seek reelection next year. He acknowledged his decision to retire also gives him political freedom to speak in favor of the vaccine without worrying about a backlash from vaccine-skeptical members of the Republican base.

"This is my last term, so I'm not really worried about getting elected again," he said. "I think it's the right thing to do."

Chikowski said she knows a lot of people are tired of thinking about the pandemic. But with cases and hospitalizations once again rising in Wisconsin, that's not a luxury health officials have.

"Is there fatigue? Absolutely, there's fatigue," she said. "But people are still dying, so we don't get to be tired. We get to try to find a new way to have a new message that somehow reaches people that says: Get a vaccination, please."