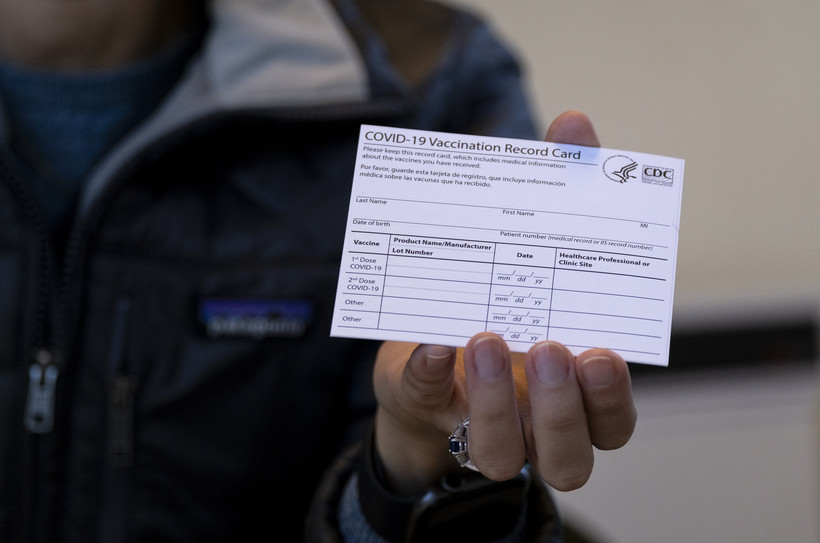 In this Jan. 10, 2021 photo, Sarah Gonzalez of New York, a Nurse Practitioner, displays a COVID-19 vaccine card at a New York Health and Hospitals vaccine clinic in the Brooklyn borough of New York. Craig Ruttle/AP Photo

'Our Choice Has Been Stripped From Us,' Say Vaccine-Hesitant Hospital Employees Who Could Face Dismissal
By Rob Mentzer and Jenny Peek
Share:

Health workers opposed to hospitals' vaccine mandates held protests across Wisconsin on Tuesday. They say hospital systems' requirements are an infringement on their free choice.

In Madison, several hundred people gathered at the state Capitol to protest.

Naomi, a registered nurse who traveled to Madison from Marathon City, was among those protesting. She declined to give her last name for fear of retribution from work. She said she respects those who want to get vaccinated against COVID-19, but she sees the issue differently.

"It's their choice if they choose to get it," she said. "Every day in health care, we run across people that may have different views than we have, but we treat them respectfully. And we give them damn good care. And now, we are supposed to have something injected into our body or lose our job."

Another nurse who attended the Madison protest, Stephani, who also only gave her first name, said she felt blindsided after providing care to COVID-19 patients for the last 18 months. As a traveling nurse based in Medford, Stephani said she went to work every day despite knowing the risks of contracting COVID-19.

It wasn't the only protest in the state. Health care workers gathered in Fond du Lac on Tuesday, in Grafton on Friday and planned a Green Bay protest for Wednesday.

The protests followed a wave of announcements by hospital systems in the state that they would require employees to be vaccinated or face dismissal. It's a position supported by the Wisconsin Nurses Association, the Wisconsin Medical Society and a host of other organizations on the grounds that the vaccines protect both patients and health care workers from serious complications and death from the disease.

Wisconsin law already requires that hospital workers be vaccinated against other infectious diseases, including measles, and employer mandates of the COVID-19 vaccine have been upheld in court. On Monday, Washington state made it law that health care workers need to get the vaccine.

But there is a vein of opposition to vaccine mandates, in Wisconsin and across the country. A number of Republican-controlled states have passed laws banning employers from requiring COVID-19 vaccinations. In Wisconsin, state Senate Majority Leader Chris Kapenga, R-Delafield, on Friday issued a statement in support of protests.

"I want to encourage the groups that are forming to stick to your principles and don’t give in!" Kapenga said. "Based on what I am seeing, it will be impossible for the hospital system to function without you."

In a subsequent interview with the Milwaukee Journal Sentinel, Kapenga denied that he was calling on workers to strike or walk out of their jobs.

Jeanette Deschene, who works as a financial advocate with Aurora Health in Manitowoc, said she plans to attend Wednesday's Green Bay protest. She's asking for flexibility for health care workers — for example, requirements that unvaccinated workers wear additional personal protective equipment when they interact with patients — rather than a mandate that would force workers to choose between their jobs and their vaccine status.

Deschene had COVID-19 in 2020, and still has long-term symptoms from the disease. She is wary of potential long-term effects from the vaccine.

About 53 percent of Wisconsin's population has received at least one dose of the vaccine, according to state data. The number of new COVID-19 infections in Wisconsin has risen dramatically in the last month as the new, more contagious delta variant of the disease has spread. The state is now averaging more than 1,100 new cases per day.