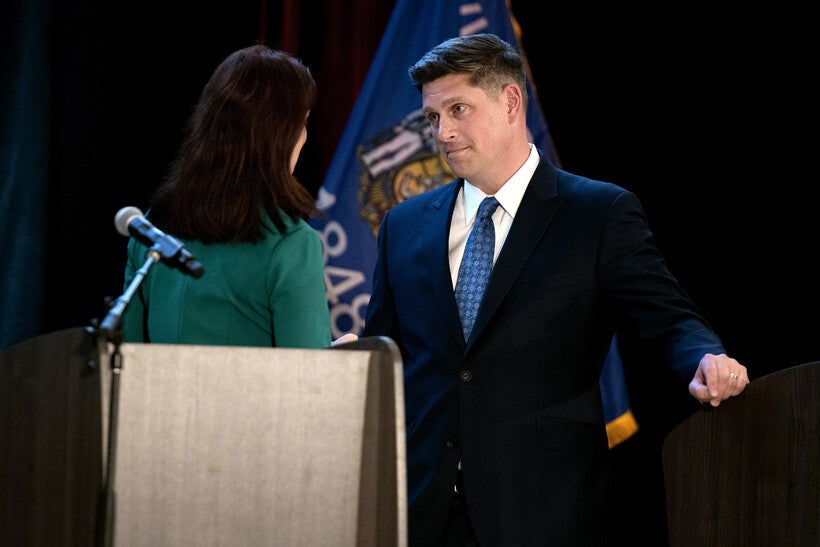 After entering the race in January, Nicholson's candidacy failed to take hold
By Shawn Johnson
Share:

Republican Kevin Nicholson has dropped out of the race for governor in Wisconsin, leaving the race after months of waging an aggressive campaign that failed to take hold.

In a written statement announcing the move Tuesday, Nicholson said he had spent the past week assessing the state of the primary race.

"It has become clear to me and my team the only path forward for our campaign is attacking the other candidates in the race on the airwaves and running a very negative campaign," Nicholson said. "While our team has the capability to do that, that is not something I want to do — nor do I believe that it would be good for the party to do so."

Nicholson said he would not endorse in the GOP primary, which will be held on Aug. 9. The winner will take on Democratic Gov. Tony Evers in November.

While Nicholson said he's unwilling to go negative in the remaining month of the primary, the campaign he ran before bowing out was hardly amicable.

Nicholson announced his candidacy in January and immediately began to attack his Republican opponent, former Lt. Gov. Rebecca Kleefisch, as part of a failed GOP machine.

After Kleefisch came up just short of winning an endorsement from GOP delegates at the annual state party convention in May, Nicholson took credit, calling her setback a victory for him.

Nicholson branded himself as a political outsider, a message that was nearly identical to the one he used in 2018 in his failed bid for U.S. Senate.

But when construction executive Tim Michels got into the race in April, it changed the race dramatically.

Michels embraced the same outsider theme, amplifying it with millions of dollars in TV advertising. The similarities didn't stop there. Both Nicholson and Michels promoted their U.S. military service, Nicholson's in the Marines and Michels' in the Army.

After former President Donald Trump endorsed Michels in May, he shot up in the polls. The most recent survey from Marquette University Law School showed Michels with the support of 27 percent of GOP voters, virtually tied with Kleefisch at 26 percent. Nicholson placed a distant third with 10 percent followed by state Rep. Tim Ramthun, R-Campbellsport, at 3 percent.

Nicholson took his share of swipes at Michels during a recent debate that Michels declined to attend, but he indicated Tuesday that he could support either Michels or Kleefisch in a general election race against Evers. In an interview on WISN-AM, he declined to say which candidate he thought was best suited to win in November.

Both candidates made overtures to Nicholson's supporters following his announcement.

"I'd like to thank Kevin Nicholson for the hearty debate and competition to make our state and conservative movement better," read a statement from Kleefisch. "Moving forward, I humbly ask Nicholson’s supporters to join our team."

"I respect Kevin Nicholson," Michels said in a statement. "This race was better for him being in it, working as hard as he did, and pushing his outsider message about the need to shake up the Madison machine. I will work hard to earn the support of his supporters."

Democrats, for their part, said both Kleefisch and Michels bore similarities to Nicholson, calling them extremists.

"Kevin Nicholson leaving the race only means that there is one less radical Republican in the gubernatorial primary," read a statement from Democratic Party of Wisconsin spokesperson Hannah Menchhoff. "Nicholson exposed deep divisions among Wisconsin Republicans who only want to move further to the right."

In addition to leaving a block of primary voters up for grabs, Nicholson's departure could prove significant in other ways. His candidacy had the backing of billionaire GOP megadonor Richard Uihlein, the Illinois businessman and co-founder of the Pleasant Prairie-based shipping supply and packing company Uline. Uihlein could decide to back another candidate in the primary, or he could focus on other races around the country.