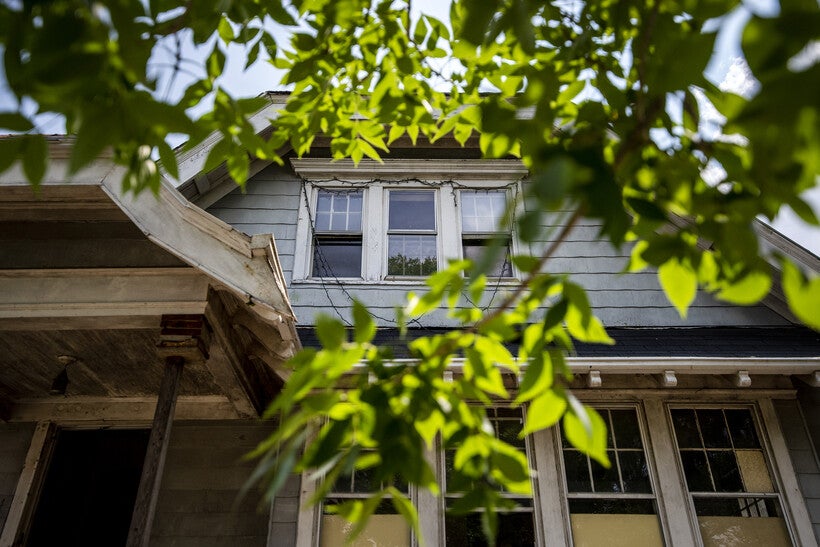 Windows of a home can be seen through leaves Thursday, Aug. 5, 2021, in Milwaukee, Wis. Angela Major/WPR

Housing supply in the state has remained limited, even as the state deals with a rise in home sales. That's led to upticks in home prices.

State Rep. Rob Summerfield, R-Bloomer, chairs the Assembly Committee on Housing and Real Estate. He said in recent years, there have been fewer new lots available to build on.

"There's just not enough houses available," said Summerfield at a Thursday morning press conference. "They're just not keeping up with a building demand of people, and also people staying in their houses longer."

According to documents WPR obtained Friday, the drafted bills include requirements for a local government to put at least 10 percent of any federal stimulus money it receives from the American Rescue Plan Act toward creating new workforce housing or programs for loans for repairing older housing.

Under one of the bills, local governments would have to create a process to approve or deny workforce housing projects within 90 days of receiving an application. The bill in question requires those governments to approve projects consistent with comprehensive or zoning plans, unless they can prove a development would have a negative effect on public health or safety, and that those impacts could not be mitigated without making a project "financially infeasible."

The bills define "workforce housing" as housing that costs a household no more than 30 percent of its gross median income, with residential units intended initially for households with a median income at a level of 120 percent or less of the county median income.

Local governments would also be required to allow some residential housing in commercial areas, unless those areas are located next to industrial areas or residential use of the areas would threaten public health or safety.

The burden to demonstrate that negative effect would fall on cities.

Other changes would allow the Wisconsin Economic Development Corp. to expedite approval of construction for residential developments considered "shovel-ready."

Assembly Majority Leader Jim Steineke, R-Kaukauna, said as a realtor, he can attest to the issues at hand.

"When you have younger kids that are coming out of college getting their first jobs and unable to afford a home because of the rising prices and lack of available housing, it's a serious problem," said Steineke.

Mary Duff, chair of the Wisconsin Realtors Association, said the ongoing shortage is creating generational rifts, in addition to keeping families from getting homes.

"Cash buyers are winning, and those who can't get financing or need to get financing can't get homes," said Duff. "Then they sign a lease, and then that's another year of a lost opportunity to increase their wealth."

Even before the pandemic, first-time homebuyers across the country struggled to buy houses as investors paying with cash have made up an increasingly large share of starter home purchases.

According to U.S. Census Bureau data, as of the second quarter of this year, only 37.8 percent of people under 35 years old own housing.

Issues of systemic racism have also factored into homeownership rates, particularly for Black households. That can create ongoing financial instability.

Summerfield said the legislation is one part of making Wisconsin "an attractive place to live and work again."

Republicans control both houses of the state Legislature. But it's not clear at this stage whether Democratic Gov. Tony Evers would sign the bills if they make it to his desk.

The office of state Rep. Kalan Haywood, D-Milwaukee, a member of the Committee on Housing and Real Estate, did not immediately return a request for comment.