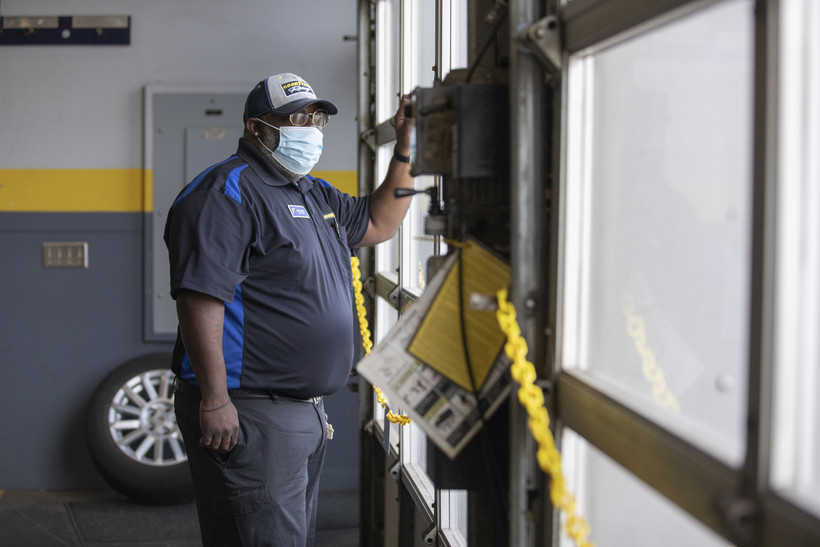 Greg Lewis, who manages a Goodyear tire store in Brookfield, Wis., has tried since January to buy a house in several Milwaukee neighborhoods. He temporarily gave up in late April after repeatedly getting outbid. Particularly disappointing: when he lost the chance to buy a two-bedroom Hampton Heights neighborhood home after a surprisingly low appraisal reduced how much a bank would be willing to lend. He is still working with a real estate agent to eventually buy a house someday. Photo taken April 30, 2021. Coburn Dukehart/Wisconsin Watch

Homeownership Gap For People Of Color In Wisconsin Is Wide; Communities, Nonprofits Try To Close It

To Greg Lewis, the home was beautiful. Cozy and inviting, the two-bedroom house in Milwaukee had a finished basement, two and a half car garage, an attached apartment and a yard.

He had his eyes set on it for 42 days, only to learn that the appraisal, or valuation of the property, was lower than he expected. Lewis thought it was going to be about $100,000, as another house on the same block sold for $130,000. Yet the appraisal only came in at $90,000 — meaning banks would be limited in how much they could lend him to buy the home.

He blames the difference on racism. And he is not alone. Experts and some homeowners say historic racism continues to play a role in depressing the value of Black-owned homes, especially in majority-Black neighborhoods.

"Some homes can be beautiful homes and the appraisal comes in short, and then you got to deal with that because they find out that it’s a Black person that owns it and is selling it," said Lewis, who had to take a pass on buying the house. 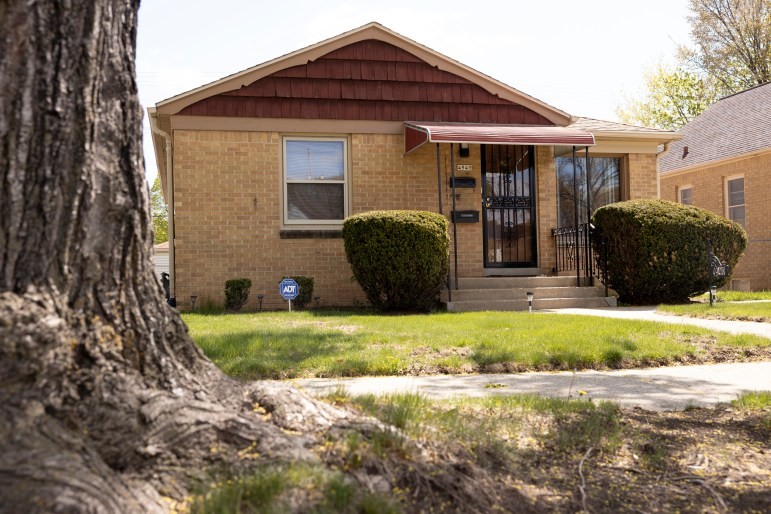 Greg Lewis hoped to buy this two-bedroom house in the Hampton Heights neighborhood of Milwaukee. But a surprisingly low appraisal reduced how much a bank would be willing to lend, scuttling his plans. Lower appraisals are among many barriers to building wealth faced by Black Americans. Photo taken April 30, 2021. Coburn Dukehart/Wisconsin Watch

Owning a home allows families to preserve and grow wealth, increases their capacity to borrow and lowers the cost of housing. Lower appraisals are among many barriers to building wealth faced by Black Americans.

Experts say that historic, discriminatory practices such as redlining — areas where banks refused to lend money — and racial covenants, which banned sales to Black buyers, have combined with modern-day racism and overall lower incomes to disadvantage Black Americans, hurting their ability to buy a home.

Lewis has now stalled his house-hunting, discouraged by being outbid so many times.

"It took a lot out of me," he said. "I went into a depressive state. Looking for a house is really excruciating, and at the end of the day, you want to find something that fits you, something that you like, so that’s the hardest part."

The National Association of Realtors found in a 2019 study that owning a home remains elusive for many Black buyers, with 43 percent of Black households able to buy the typically priced house compared to 63 percent of white households.

The Center for Responsible Lending also found it would take 14 years for a Black household at the national median income level to save for a 5 percent mortgage down payment and closing costs for a median-priced house — and 11 years for a Latino family — while a white median-income family needs nine years to accumulate the same amount of funds.

From Homeless To Homeowner

Sheila DeCuevas, a mother of four, struggled to find a home for 11 years, unable to save enough money for a deposit or meet financial requirements for a loan.

"There was always problems with qualifications for any type of loan or traditional lending or any type of program, so we had a really tough time trying to get someone to help us," she said.

DeCuevas rented for years without feeling secure after experiencing homeless with her then-2-year-old son. "A lot of people don’t understand because they have stable lives, but acquiring your own place brings peace of mind to a lot of people," she said.

DeCuevas eventually worked with Acts Housing of Milwaukee, which helps low-income families purchase and fix up their own homes. DeCuevas said Acts Housing improved her financial literacy, allowing her to buy her own home. 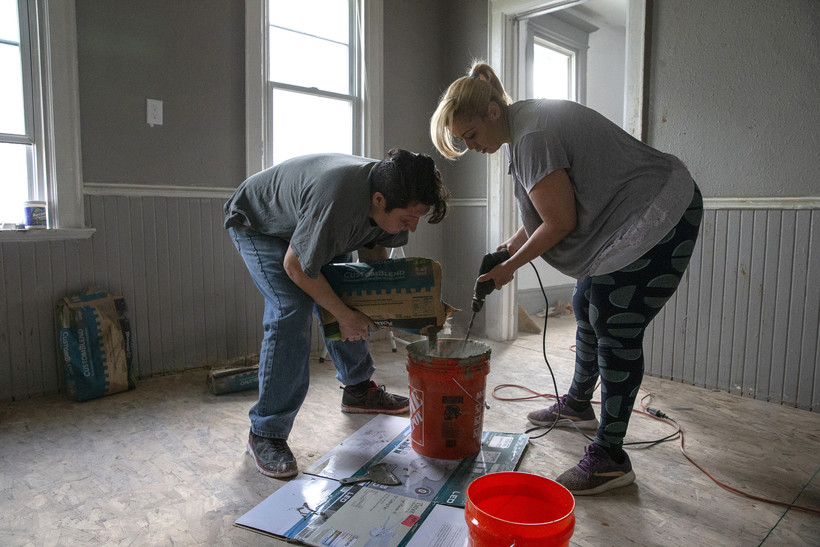 Sheila DeCuavas, right, and her husband, Nabor Cuevas Tirado, mix concrete for tiles in their new house on May 13, 2020. Decuavas and Cuevas Tirado worked for at least four months to fix the house. Zhihan Huang/Milwaukee Journal Sentinel

Homeownership is a key metric for standard of living in several ways. Homes are often the largest single asset a family owns, providing a source of wealth for current and future generations. Homeownership also provides housing stability, which can help children do better in school and provide other benefits. It is a benefit that too many Black people do not enjoy.

Kurt Paulsen, a University of Wisconsin-Madison expert on housing affordability, said little headway has been made in increasing Black homeownership, which stands at 44 percent nationally compared to 74 percent for whites.

"Nationwide, the Black homeownership rate is still not where it needs to be, and in some ways, has not significantly improved since the 1968 Fair Housing Act," Paulsen said. 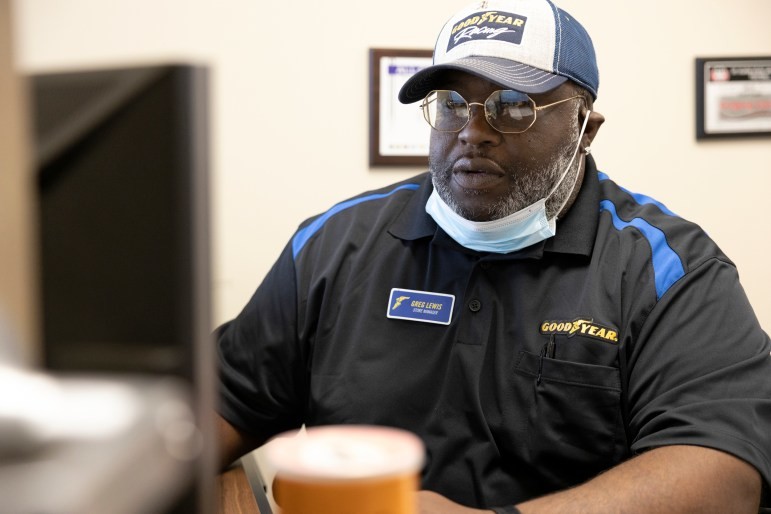 Greg Lewis, who manages a Goodyear tire store in Brookfield, Wis., has tried since January to buy a house in several Milwaukee neighborhoods. He temporarily gave up in late April after repeatedly getting outbid. Particularly disappointing: when he lost the chance to buy a two-bedroom Hampton Heights neighborhood home after a surprisingly low appraisal reduced how much a bank would be willing to lend. He is still working with a real estate agent to eventually buy a house someday. Photo taken April 30, 2021. Coburn Dukehart / Wisconsin Watch

Although housing discrimination based on race is illegal through the Fair Housing Act, Paulsen said mortgage lenders sometimes deny Black households loans — or charge higher interest rates — due to lower income and a higher debt-to-income ratio.

Kacie Lucchini Butcher is a public history project director at UW-Madison who researches housing inequity. Butcher emphasized the alarming implications of low Black homeownership rates, including the ability of such families to build intergenerational wealth.

Nationally, the average white household has a net worth of $171,000 — 10 times higher than the average Black household’s net worth of $17,150. And in Milwaukee, Black Americans are worse off financially today than they were 40 to 50 years ago, found Marc Levine, UW-Milwaukee professor emeritus of history, economic development and urban studies.

Building intergenerational wealth is not the only challenge Black Americans face.

"One of the problems in Madison is so much of it (housing) is allocated to single family zoning districts, and it’s quite expensive to access that," he said.

Paige Glotzer, assistant professor of history at UW-Madison and author of a book on the history of housing discrimination, said bias still permeates the housing market in sometimes inconspicuous ways.

Glotzer said a house owned by Black people or situated in a Black neighborhood will appreciate less in value than the exact same house in a majority white neighborhood, and "it’s sometimes hard to detect because you can always give a colorblind reason why you’re taking away value from a house."

Levine noted that a Black household in Milwaukee with an income over $100,000 is twice as likely to live in a concentrated poverty neighborhood as a white household with income under $10,000 a year — meaning even a high income does not insulate Black Wisconsinites from housing discrimination. 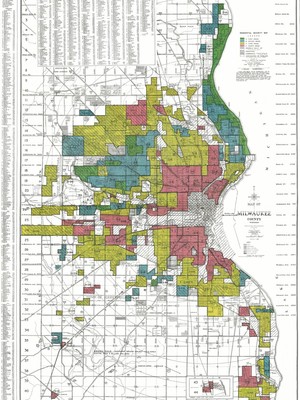 A 1938 map of Milwaukee depicts how the government-sponsored Home Owners’ Loan Corporation graded neighborhoods in Milwaukee — a process now known as redlining that fueled segregation and economic disparities in American cities. The visually appealing areas composed of white residents were given a grade of A and coded green. Areas coded blue, or grade B, were deemed "still desirable." Yellow-coded areas, or grade C, were defined as "definitely declining," while an area categorized as red was labeled "hazardous" for investment. Photo courtesy National Archives

Generations after the 1968 Fair Housing Act was enacted, white and Black homeownership rates and conditions remain miles apart. This is especially true in Milwaukee, one of the country’s most segregated major cities.

A main reason for housing segregation is redlining, which began with the Home Owners’ Loan Corporation of 1932 — when the Great Depression thrust America into a housing crisis.

The federal government issued bonds to refinance the majority of Americans’ mortgages. The government developed standards for which mortgages and neighborhoods it would refinance by color coding geographical areas by risk factor. Green indicated the lowest risk. All-Black and neighborhoods with “inharmonious racial groups” were assigned the highest risk color — red.

"Redlining was actually a form of lending discrimination," she said. "There are huge hurdles in terms of getting access to credit, to capital, to money and to good banking that is still very much a huge determinant of how people can live. And that is, and continues to be, very much something really based on racism." 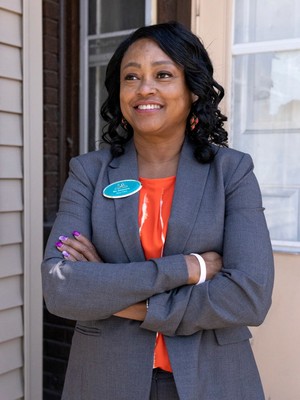 Mo Simmons is seen in front of a house for sale on W. Center St. in Milwaukee on April 30, 2021. Simmons, a real-estate agent with EXIT Realty Horizons, is a member of Take Root Milwaukee, a consortium of 50 community organizations, neighborhood groups, HUD-certified housing counseling agencies, real estate agents and lenders that helps residents buy, keep or fix a home. Coburn Dukehart/Wisconsin Watch

"There’s been a lot of biases that have kept Black people from being able to obtain homeownership," she said. "But there’s now, in 2021, a lot more education and a lot more resources …  and Take Root is providing that," she said.

A recent Wisconsin Policy Forum analysis found that between 2014 and 2018, the city of Milwaukee spent $26.4 million to help existing homeowners fix up their properties but comparatively less — $3.5 million — on increasing homeownership. The city also spent $19 million on expanding the amount of affordable housing. The think tank suggested that Milwaukee could better focus its efforts — spread across 20 housing programs with no single director — to boost the level of homeownership and affordable housing in the city.

'Everyone Should Own A Home'

One resource is the Wisconsin Housing and Economic Development Association, created in 1972 by the Wisconsin Legislature, which holds over $2 billion in assets and serves as a lender for state residents in need of affordable housing financing. The organization issued 2,680 loans — totaling $366 million — to first-time homebuyers and working families in the 2020 fiscal year.

Joaquin Altoro, CEO of WHEDA, said increasingly, financial institutions are identifying potential owners of color and helping them buy homes. "I’m not trying to change racism, I can’t do that by myself," he said. "But I can change the fact that we put one, two, three homeowners in a neighborhood."

Lewis said he looks forward to the day he can finally buy a house — and possibly pass that asset along to his family.

"I think everyone should own a home," he said. "That’s a start to building some generational wealth for Blacks."

Reporter Zhen Wang contributed to this story, which was produced as part of an investigative reporting class at the University of Wisconsin-Madison School of Journalism and Mass Communication under the direction of Dee J. Hall, Wisconsin Watch’s managing editor. The nonprofit Wisconsin Watch (www.WisconsinWatch.org) collaborates with WPR, Wisconsin PBS, other news media and the UW-Madison School of Journalism and Mass Communication. All works created, published, posted or disseminated by Wisconsin Watch do not necessarily reflect the views or opinions of UW-Madison or any of its affiliates.