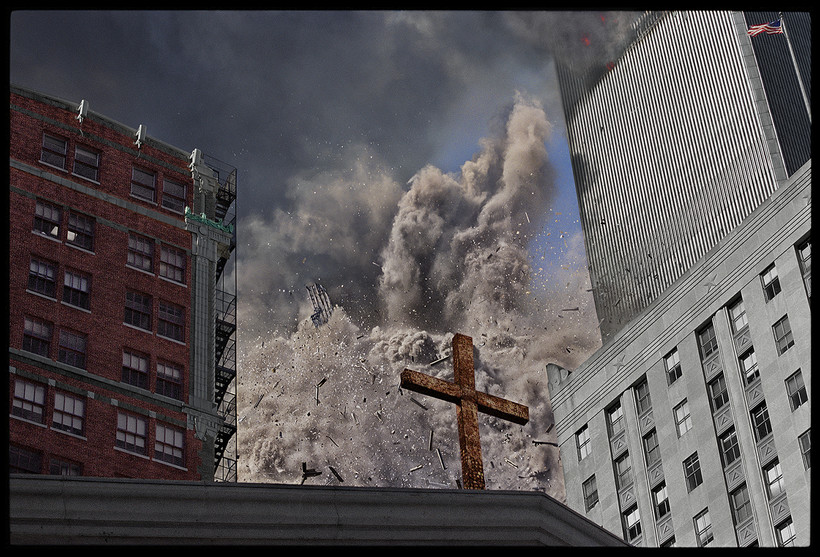 Remembering 9/11 Through Lens Of A Photojournalist

When photographer James Nachtwey first reached for his camera on Sept. 11, 2001, he had no idea what was happening.

"I could see it from my window," he recalled. "I didn’t see the planes hit, and I didn’t know why the tower was smoking. I thought it was an accident."

Still, he knew even an accident at the Twin Towers was newsworthy so he started assembling his gear. It was then he felt his windows rattle and saw the second tower smoking.

"I immediately knew," he said, "that we’d been attacked and the United States was now at war."

While that knowledge might have stopped some in their tracks, Nachtwey ran toward the scene, camera in hand.

The photos that he took that day have become some of the most iconic of his distinguished, 30-year career covering armed conflicts and social issues all over the world, most recently in Iraq and Afghanistan. He’s been awarded the Overseas Press Club’s highest honor for photography on five separate occasions, among numerous other awards.

But Nachtwey’s 9/11 photographs did more than raise his public profile or add accolades to an already distinguished career — they changed the way he looked at the world around him.

"For over 20 years," he said, "I’d been covering what I thought were separate events in the Islamic world — not only in the Middle East, but in Africa, Asia and Europe. At that moment, history crystallized and I realized they were all connected."

"To The Best Of Our Knowledge" host Anne Strainchamps spoke with Nachtwey before his 2015 solo show at the Currier Museum of Art in New Hampshire, "Witness to History," which documents his work in New York and the Middle East.

Anne Strainchamps: Jim, you’ve covered every significant global conflict or crisis for decades, but this exhibition has pulled together a particular body of work – photographs you took on 9/11 at Ground Zero and subsequently in the wars that followed. Why exhibit them together like this, now?

James Nachtwey: Well, I have the body of work and it’s interconnected. And it’s relevant to today because we’re still involved with the reverberations of all those events and will be for a long time. I think it’s significant that this show is appearing in New Hampshire at a time when there’s a lot of political activity in regard to the primaries, because it allows viewers to have a look at what’s happened in our recent history and contemplate it, ask questions about it. I don’t think the museum meant it to be a political statement. But I hope it’s of use to people.

You took what has become an iconic picture of the South Tower collapsing, with the cross from a church steeple in the foreground and the tower exploding behind it. What were you thinking as you framed it?

I understood right away that this was an attack by Al Qaeda. I knew enough about our contemporary history and I’d worked enough in Afghanistan to be sure that was the case. That cross was on a church about a block and a half away and I just saw it as a symbol of our culture, so I framed it that way. It wasn’t such a brilliant thing to do, it seemed obvious to me. The tower collapsed as I was photographing. It was hard to believe I was seeing it with my own eyes – all those steel girders, weighing hundreds or thousands of pounds each, flying through the air like matchsticks. My mind literally clicked into slow motion and everything seemed to be floating towards me so slowly that I thought I had all the time in the world. I was shooting film and there are 36 frames on a roll. I shot that picture on the last frame and had to stop to change film. That’s when everything suddenly went back into normal motion and I realized I was about to get taken out. I had just a few seconds to take cover in the lee of some buildings across the street, before all that wreckage fell over me. I looked at the picture yesterday and it was hard to believe. I’ve actually never gotten over it.

You were a student in the 1960s, when the Vietnam War and the Civil Rights protests were happening. You’ve said in the past that you chose this career because the photographs taken at the time had such a powerful impact that they changed history?

Yes, that’s right. Photographers were telling us one thing and our political and military leaders were telling us something else. I found the work of the photographers to be more convincing, and I decided that’s what I wanted to do with my life. I wanted to be part of that tradition. I saw that pictures could not only record history, they could help change the course of history, by becoming an element in the process of change.

So the role of the war photographer is crucial to democracy?

I think it’s absolutely necessary. The stories we tell are vital for society to function properly. How can citizens make proper decisions unless they know what’s going on? Our democracy is founded on our citizens being informed and making informed judgments. That’s why journalism matters. And a photograph can make a human connection. It can help people see something that is universal and human, that transcends culture, religion, nationality and race. It’s not just something that’s ideological or statistical or monumental in its global impact. You’re witnessing something happening to an individual.

The stereotype of the war photographer is the adrenaline junkie. But it sounds like that’s not at all what it’s about for you.

Adrenaline is a fact, but it’s not a reason. There probably are some war junkies out there, but I don’t think they continue for very long and perhaps they’re not the ones who make the most meaningful pictures. Adrenaline is part of the job because it’s actually necessary to survive. But there are deeper reasons for pursuing the profession than adrenaline.

How do you deal with seeing so much suffering? I imagine one way would be to wall it off while you’re working, to suppress your own reactions until later?

No, you have to channel the emotions into the work. If I were to see things and not feel emotions, I wouldn’t make pictures that were worth much. I’m the one who has to feel it first, if I’m going to make anyone else feel anything. It’s simply not the case and never has been the case, that photographers go someplace and wall themselves off. Our job is actually quite the opposite. Our job is to go someplace and open ourselves up, leave ourselves vulnerable, and then translate those feelings into our work, so we can pass them on to viewers.

You remind me of another photo in the exhibition – an Afghan woman completely covered in a burqa, kneeling before a gravesite. We can’t see her face, but her grief is palpable. Who is she, and where was that taken?

It was taken in a cemetery in Kabul in 1996. She was there mourning her brother who’d been killed in a Taliban rocket attack. At that time the Taliban had surrounded Kabul and were shelling and rocketing daily. I think the graveyard itself is expressive . It’s so humble – bare, cracked earth with uncarved, raw gravestones. And her hand, her aged, weathered hand that had seen a hard life, reaching out, touching the stone, as if that’s as close as she can get to her brother. What you don’t get in the picture is the sound she was making as she was grieving for her brother. She was singing a kind of song, in a very grief- stricken voice. It was very moving. It must be so difficult to share moments of grief like this, multiplied over and over. You’ve taken photos of injured children, veterans painfully rehabbing themselves, people who’ve been shot, or are about to be shot. What do you do with all the grief?

You carry it with you. Nothing is forgotten. You just have to carry it with you with as much grace as you possibly can. Again, as opposed to the stereotype, rather than getting hardened to it, I find I get more and more sensitized to it. It gets more difficult to witness such things, not less difficult. It’s just something you have to bear.

Do you still believe in the goodness of humans?

Oh absolutely. I’ve seen so much goodness come out of the most horrible situations, so much generosity and hospitality and caring and kindness, that I can’t help but be moved and humbled by it. There’s a very large installation (in the exhibition), about 32 feet long. It’s one single file, one single print – a composite of 60 images made in combat field hospitals during the war in Iraq. They’re pictures of lives being saved. I tried to make the point of view that of a member of the medical team, so you feel as if you’re right inside, seeing what they’re doing to save lives. It’s called "The Sacrifice."

You were there in one of those field hospitals yourself. Weren’t you injured in a grenade attack?

Yes, in 2003. I’d been covering a single platoon for Time Magazine and I was with Mike Weisskopf, a Time reporter. A grenade was thrown into the humvee. Mike had his hand blown off and I got injured with shrapnel and a couple of the soldiers got pretty badly hurt. So I was taken to that very same medical facility and medevaced out to Germany.

Did you keep taking photographs while you were injured?

Until I passed out, yes.

Why do you keep going back?

Because I have a lot of experience. Because I see that there’s still a reason, as much as ever, to do it. And I guess I do it because I can.