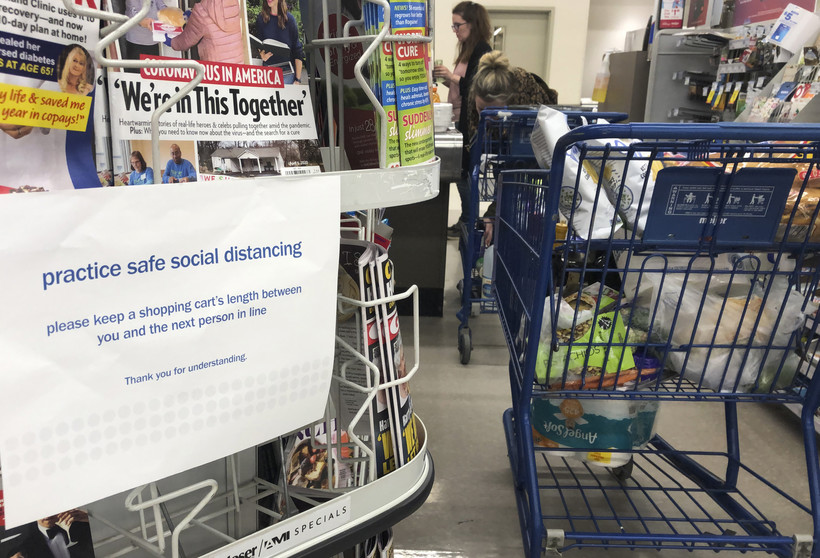 A sign alerts shoppers to practice social distancing, due to the coronavirus, while in the checkout line at a grocery store, Saturday, March 28, 2020 in Troy, Mich. Carlos Osorio/AP Photo

An economic downturn might lead to budget shortfalls at all levels of government, but among Wisconsin's local governments, it's counties that could be the hardest hit.

That's the finding of a new report from the Wisconsin Policy Forum, which notes counties face revenue shortfalls because they rely more on sales taxes than cities or villages do. Consumer spending has fallen steeply since the beginning of the COVID-19 pandemic, meaning sales tax collections are way down.

And counties are also directly responsible for some of the services that are strained in the response to the virus, including health departments and nursing homes.

That creates pressure in both directions, according to Rob Henken, Wisconsin Policy Forum president. He said county governments will face lower revenues and greater expenses.

Sixty-eight of Wisconsin's 72 counties collect a 0.5 percent sales tax, as is permitted by state law. On average, it accounts for about 8 percent of their overall revenue stream, Henken said. Counties don't collect sales taxes on groceries and pharmaceuticals — two parts of the economy unaffected by the crisis.

The problem will be most pronounced in counties where commuters, tourists or other visitors account for a large share of the economy.

"Communities that rely on (visitors) are getting a double whammy," Henken said. "Not only are people not coming to their communities to take advantage of entertainment and culture, but also people are not necessarily going to work, which has another impact."

In Outagamie County, for example, revenue related to the Appleton International Airport and the Fox River Mall has dropped precipitously since the crisis began, said Outagamie County Executive Thomas Nelson.

"Right now, the focus is on public health," Nelson said, and the county is able to provide needed services. But budget shortfalls loom in the future and Nelson said the county will need more aid than was provided in a March relief bill passed by Congress.

A new $484 billion relief bill is making its way through Congress. It includes no aid to state and local governments, something Nelson said makes no sense.

"The people that are on the ground trying to solve this problem, trying to keep communities together, focusing on the public health of a community — it's counties," Nelson said.

Outagamie is far from the only county facing projected shortfalls.

In Marathon County, the finance committee in April reviewed projections that showed a sales tax shortfall of $1.3 million for 2020, a 10 percent decline. The Wisconsin Policy Forum report cites Milwaukee County estimated losses of as much as 21 percent, or $17 million for the county.

An earlier Wisconsin Policy Forum report looked at financial challenges for cities and villages and found those that rely on tourism will likely face greater challenges than those that don’t.

Nelson said counties aren't facing a budget crisis yet. But he and other officials are bracing for one.

"Right now, I think we're OK," he said. "What I'm concerned about is, I'm looking out four or five weeks, two months, whatever it might be. How are we going to be then? And what can we do to be prepared?"