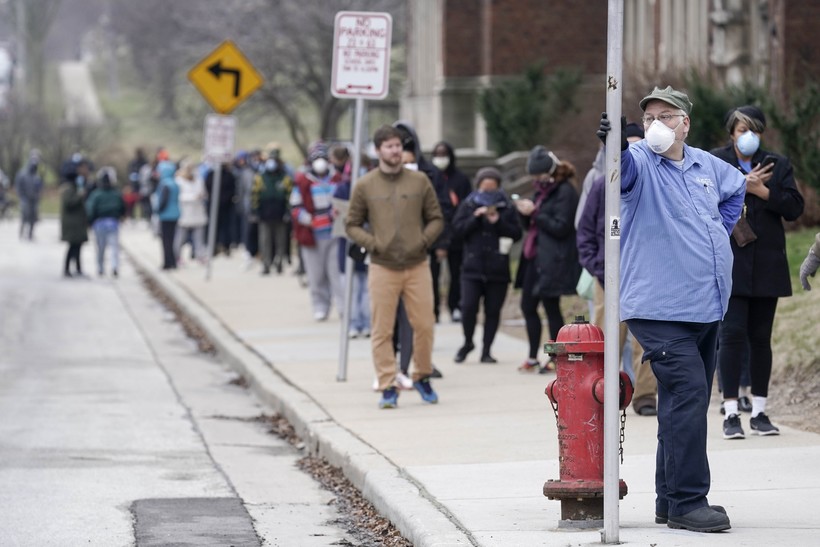 To The Polls In A Pandemic: How Wisconsin Went Ahead With An Election Amidst A Public Health Crisis

Wisconsin's April election made history, not for who was on the ballot, but because it happened at a time when government at all levels was telling people to stay home.

A steady drumbeat of other states had canceled their elections in response to the COVID-19 pandemic. Wisconsin, led by divided state government and officials from 1,852 municipalities at the local level, decided to forge ahead.

Voters cast a record number of absentee ballots in an effort to avoid the crowds, but many ended up voting in person anyway when their ballots never came.

Poll workers and voters — many of them seniors at higher risk of severe effects of COVID-19 — donned masks and gloves April 7. Some wore Plexiglas shields to protect their eyes.

Clerks moved polling places to big facilities like gymnasiums in the name of social distancing only to cause some voters to stand in line for hours.

"This went against all public health recommendations," said Patrick Remington, the director of the University of Wisconsin-Madison Preventive Medicine Residency Program.

"From a public health perspective, that is a potential disaster," said Ryan Demmer, an associate professor of epidemiology at the University of Minnesota.

But it wasn't just public health experts who watched Tuesday's election with some concern.

Election law experts worry about what the Wisconsin experience means for other elections in the United States during a global pandemic.

"What happened in Wisconsin is hugely worrisome because it makes it look like we don't care about our own democracy," said Ned Foley, director of the election law program at the Ohio State University during a podcast he co-hosts. "This shakes our faith."

So how did this happen?

The Legislature And The Courts

When Democratic Gov. Tony Evers made a last-minute call to postpone the election, there were two things standing in his way: the Wisconsin Legislature and the state Supreme Court.

On April 3, Evers called a special session of the Legislature to delay the election and move it almost entirely to mail-in ballots. The Legislature, which is run by big Republican majorities, gaveled the session in, then quickly gaveled it out without taking action on the governor's proposal.

On April 6, the day before in-person voting was set to begin, Evers set out on his own, issuing an executive order to delay the election.

Assembly Speaker Robin Vos, R-Rochester, was the public face of this fight. He served as a poll worker in Burlington, where volunteers all wore blue plastic gowns along with gloves, masks and goggles.

"People have been in pretty good spirits, happy to be able to vote, and at the same time doing it in a way that's really safe," Vos told WTMJ-TV in Milwaukee. "I am very confident that people are going to look back at this election and say that while it wasn't as easy as a normal election was, it went off as well as it possibly could knowing the challenges that we have with the virus."

Vos had consistently advocated for keeping the April election date, well before Evers tried to change it.

But as the debate developed, he also came out strongly against the idea of mailing absentee ballots to all voters, saying residents of apartment buildings could potentially cast more than one vote.

"How do we know that it's going to just one person?" Vos told reporters in early April. "How do we ensure that they're actually legally allowed to vote in that district because they still reside there?"

While it may seem like ages ago now, Evers was, for weeks, on the same page as Vos.

Even as his administration was banning crowds of 10 or larger, and ordering bars and restaurants closed on March 17, Evers said he did not plan to delay the election. And on March 20, Evers told reporters he couldn't postpone in-person voting if he wanted to.

"My ability to move that date is nonexistent. I don't have that authority," Evers said. "For me, it's about making sure that our democracy is able to persist. We're going to have to have a vote. It's scheduled for April 7, and there's frankly no way to do it in a better way."

Evers kept saying this, and reporters kept asking about it, including on March 30, a week before the governor would issue his executive order to try to stop the election.

"Nothing has changed from my vantage point," Evers said.

Evers' administration did work with the Wisconsin Elections Commission to find protective equipment for poll workers, and he freed up more than 2,400 members of the Wisconsin National Guard to serve at polling sites.

But some clerks in cities that saw the longest lines said the governor's decision came too late. The Wisconsin Elections Commission said it did not receive official word that the National Guard would be available to help until April 3 — the Friday before the election.

By that time, Milwaukee Election Commission Director Neil Albrecht had already made the decision that would in some ways come to define Wisconsin's election.

Instead of the city's usual 180 polling places, Albrecht would open just five. This meant voters were forced to stand in line, some of them for hours.

"I had to operate this in a way that ensured the greatest level of caution and safety for our election workers and for the public," Albecht said. "What that definitely created was some lines and some wait time."

By this point, poll workers — who had been warned on a daily basis about the health risks of large crowds — were dropping out. Albrecht said that was especially pronounced in his city, which is home to the majority of Wisconsin's African American population and the bulk of its COVID-19 cases.

"I think at this particular point in time, one of the factors that really has to be considered is that Milwaukee is really the epicenter of cases of COVID-19 in the state of Wisconsin," Albrecht said.

In Green Bay, Wisconsin's third-largest city, there were just two polling locations, down from the usual 31.

Green Bay Mayor Eric Genrich, a former Democratic state lawmaker, said the city started with 270 poll workers before COVID-19 and ended up with just 15 of them. The city was offered help from the National Guard, but it declined.

"We didn't know what the National Guard could do for us — how many people were available — until the 11th hour," Genrich said.

Genrich has come under scrutiny locally, including from Brown County Clerk Sandy Juno, a Republican.

"When you're working with an election, you have no control over some of the things that are going to happen, so you have to be prepared to make adjustments," Juno said. "I did not see that happen in Green Bay."

Juno said the experience in Madison, where 66 polling places were open and there were virtually no lines, showed other cities could do the same.

Genrich said the election was a difficult one but argues it could have been worse if his staff had been spread thin at more polling sites.

"As visibly ugly as our experience was in Green Bay, the smoothest running polling location might have been even uglier because we know that COVID-19 is spreading in this community," Genrich said.

All of this took place as the clerks and poll workers who run elections were as busy as they had ever been.

"It was really bad. Really stressful," said Debra Salas, the clerk treasurer for Kenosha, Wisconsin's fourth-largest city. "There were tears."

Salas said she felt personally responsible for her staff, who were trying to maintain social distancing while keeping up with a deluge of absentee ballot requests.

"We had never experienced anything like this," Salas said. "So having all of that unexpected additional work along with dealing with a pandemic — things were fluid. Every day, something would change."

Despite the workload, Salas said she was glad people were requesting absentee ballots because she thought it would mean fewer people headed to the polls on election day. Crowds did thin on April 7, but they didn't go away.

"I didn't expect 5,000 people to go out," Salas said of her city's in-person turnout. "I thought there would be hardly any going to the polling place."

Salas said that with the help of the National Guard, she was able to open 10 polling places, but there were still occasional lines.

Salas thinks Evers could have done more to stop the election.

"Yes, of course," Salas said. "I think something could have been done."

But she also takes issue with comments from Vos and others who argue elections must go on in the face of adversity.

"That's another example of someone that does not believe or realize what is going on around them," Salas said. "They don't realize how serious the pandemic is."

For national observers, the fact that Wisconsin moved ahead with this election despite the public health warnings is a troubling signal for democracy in the age of the new coronavirus.

The spike in absentee voting showed a willingness to vote by mail, but because of a decision by the U.S. Supreme Court, Foley said ballots mailed late at no fault of a voter may not be counted.

And Foley, the election law expert, said the long lines on election day — particularly in Milwaukee's black neighborhoods — made it substantially harder for some voters to cast ballots than others.

"I can't think of an election since 1965 that seems — from a process perspective — as much a failure as this one," said Foley, referring to the implementation on the Voting Rights Act of 1965.

Foley said the amount of polarization in Wisconsin likely contributed to the decision to move ahead with the election, but he's troubled by what it could signal for future elections.

"It was a false choice between life and democracy," Foley said. "And in some sense, I think Wisconsin sacrificed both needlessly."