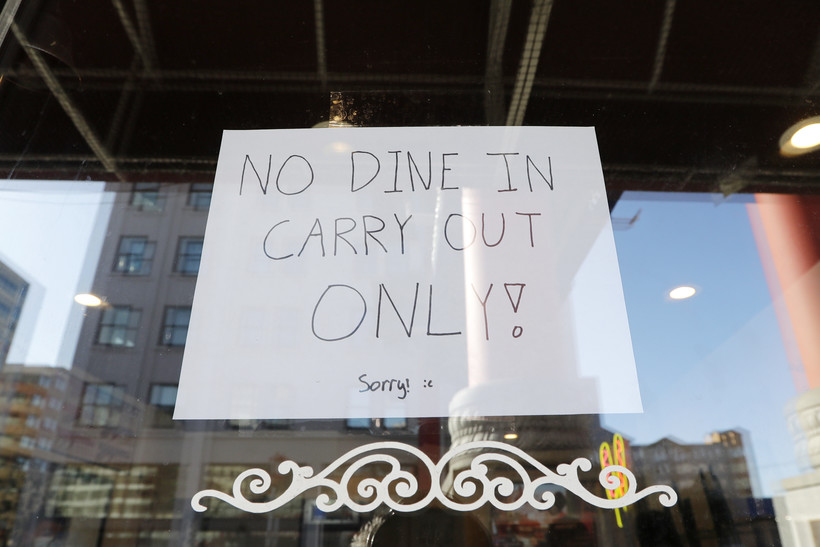 A sign posted in a restaurant window in the Chinatown-International District advises of only take out orders Monday, March 16, 2020, in Seattle. Elaine Thompson/AP Photo

The state of Wisconsin took its most dramatic step yet Tuesday to curb the spread of the new coronavirus, banning gatherings of 10 or more people, requiring bars and restaurants closed and extending a statewide closure of all public schools indefinitely.

The restrictions, which were handed down by the Wisconsin Department of Health Services under the direction of Gov. Tony Evers, took effect at 5 p.m. Tuesday.

Under the state's order, bars and restaurants will still be allowed to serve food for carryout, and large groups of people would still be allowed at several locations like airports, child care centers and hotels.

But the state's order still meant life would change in Wisconsin in ways that might have seemed unthinkable as recently as a week ago, and Evers suggested more changes could be on the way.

"We might be asking for more in the coming days and weeks," Evers said at a media briefing Tuesday. "We appreciate what everybody is doing across the state of Wisconsin, but this is an evolving process as you know and the people of Wisconsin now know."

The state's order comes just one day after a similar order restricted crowd sizes to fewer than 50 people in an effort to slow the spread of the new coronavirus.

It also comes just days after Evers had ordered Wisconsin schools closed until April 6 at the earliest.

"We're removing that deadline because we don't know if it's a realistic deadline," Evers said. "So we made it indefinite."

While the move is without question a dramatic step, Wisconsin is hardly alone in ordering the closure of public spaces. All of Wisconsin's neighboring states – Illinois, Minnesota, Michigan and Iowa – had already closed bars and restaurants.

'We Don't Have A Playbook For The Coronavirus'

Public health experts stressed that the restrictions being placed on residents in Wisconsin and other states could go a long way toward slowing the spread of the new coronavirus, but they also said the changes would come with a tremendous cost.

Dr. Patrick Remington, the director of the University of Wisconsin-Madison Preventive Medicine Residency Program, said many people who work in the service industry are now "basically unemployed."

"So that's the penalty of being overly cautious and basically closing society down," Remington said. "And then, obviously, you want to avoid the penalty of not being cautious enough and having sustained transmission."

Remington said because the new coronavirus can be spread by people who don't show any symptoms, it's difficult to control the spread. He said public health knows how to deal with other diseases like measles, rubella or mumps because they've been studied for decades.

"We know a lot about these viruses," Remington said. "But we don't have a playbook for the coronavirus."

Dr. Ronald Hershow, director of the Division of Epidemiology and Biostatistics at the University of Illinois-Chicago School of Public Health, said he applauded efforts by governors to restrict large gatherings as scientists learn about the new coronavirus.

"We don't have a vaccine," Hershow said. "We don't have drugs to mitigate the severity of infection with COVID-19. And the best we can do right now to fight this epidemic is social distancing."

That said, Hershow said the moves would take their toll.

"This is going to hurt working people and it's going to hurt these small businesses, which is what bars and restaurants are," Hershow said. "But at this point, in this epidemic, it's urgent enough that I think it's warranted."

Michael Randall, one of three co-owners of the Madison restaurant Alchemy, said the decision to close restaurants to dine-in customers was probably "the right call," but he said coping with the restrictions would be difficult.

"It's a little bit tricky or us and establishments like us because we're just not designed to be a takeout or delivery-based restaurant," Randall said. "We rely pretty heavily on dine-in customers."

Randall said the transition would be most challenging for his restaurant's staff.

"The people who were essentially bartenders and servers, their jobs basically don't exist," Randall said, although he said the shift to takeout and delivery orders would create new jobs.

While other states have canceled their presidential primaries to limit crowds, Evers said it would be much more difficult to cancel Wisconsin's April 7 election.

Asked how people could feel good about voting in an election when they are simultaneously being told to avoid crowds, Evers said he needed to consider both public health and Wisconsin's democracy.

"How long do we potentially leave offices not filled because we're into July or August and haven't held a general election?" Evers said.

"People should be able to get out and provide input to our democracy by voting absentee," Evers said.

Others, like Green Bay Mayor Eric Genrich, were more concerned.

"We will be unable to administer a normal election," Genrich tweeted Tuesday. "The Governor and legislature need to act fast to allow us to have the election in a safe and responsible way: through the mail."

The Elections Commission is scheduled to hold an emergency meeting to discuss the coronavirus Wednesday.