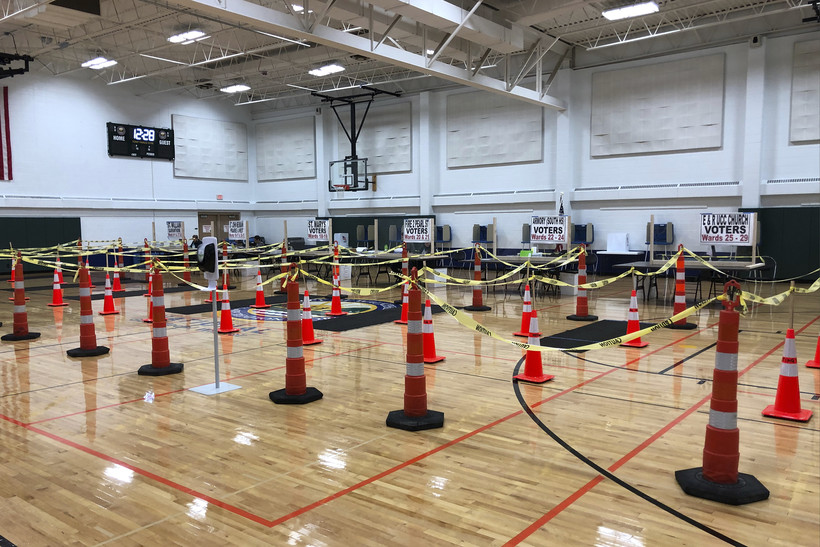 Conservatives on the Wisconsin Supreme Court have blocked an attempt by Democratic Gov. Tony Evers to postpone Tuesday's election, a ruling the court made just four hours after Evers acted.

The court's decision — coupled with a later U.S. Supreme Court order — means that despite daily public health warnings to avoid large crowds because of the COVID-19 pandemic, Wisconsin's April 7 election is happening.

Monday's lightning-fast developments began when Evers announced his order shortly before 1 p.m., telling reporters that he had been weighing the decision all weekend.

"This was not an easy decision," Evers said. "I have an obligation to keep people safe."

But Republican state lawmakers immediately appealed, noting Evers himself had said as recently as a week ago that he lacked the authority to unilaterally delay the election.

"Defying numerous state-election statutes and his countless previous statements that he clearly lacks legal authority to cancel (Tuesday's) election, the Governor announced moments ago — at the eleventh hour — that he was doing just that," wrote attorneys for the Legislature in a brief to the Wisconsin Supreme Court.

Justices gave Evers a 3:30 p.m. deadline to file his response, which was handled by lawyers at the Wisconsin Department of Justice.

"No one wants to be in the midst of this pandemic, but we are," wrote Evers' attorneys. "Everyone wishes we could have a normal, safe election on April 7, but we cannot. Action had to be taken, and quickly, and the Governor — at the helm during this emergency – acted."

"Even if the Governor’s policy judgments reflected in the order are well-founded, and even if we agree with those policy judgements, none of the authorities cited in the order support this broad sweep of power," wrote the court's majority.

In her dissent, Bradley disputed that.

"Risking the health of our families, neighbors and friends, the majority mandates that in-person voting in Wisconsin's election must occur tomorrow, April 7. In justifying its decision, the majority states that the law compels such a result," she wrote. " Nonsense. Neither the law nor common sense support the majority's tenuous and callous order."

Conservative Justice Daniel Kelly, who is on the ballot Tuesday, didn't participate in the decision, but indicated on his campaign Twitter account that he supported moving forward with the election. Dane County Circuit Judge Jill Karofsky, Kelly's opponent in Tuesday's election, did not react to the governor's order, but Karofsky campaign manager Sam Roeker said "the health and safety of every Wisconsinite should be our top priority right now."

"The state’s highest court has spoken: the governor can’t unilaterally move the date of the election," said Vos and Fitzgerald in a statement.

Evers said it was "a shame that two branches of government chose to pass the buck" at a time of an historic crisis. The governor previously called the Legislature into special session in a last-minute effort to delay the election, a call they rejected.

"Tomorrow in Wisconsin, thousands will wake up and have to choose between exercising their right to vote and staying healthy and safe," Evers said.

When Evers issued his order Monday, he signed it himself rather than directing his state Department of Health Services Secretary Andrea Palm to halt the election. That was potentially significant, given it has been Palm who has signed some of the most dramatic orders since the COVID-19 crisis began.

But when asked early Monday whether he would direct Palm to stop Wisconsin's election in the name of the public health emergency, Evers indicated he would not.

There was one remaining federal court challenge seeking to stop Wisconsin's election, this one filed by state Sen. Lena Taylor, D-Milwaukee, who is running for mayor of Milwaukee.

US Supreme Court Weighs In

Also Monday, the U.S. Supreme Court issued a decision requiring absentee ballots in Wisconsin's election to be postmarked or delivered by 8 p.m. April 7.

Under a previous court order by U.S. District Judge William Conley, voters would have had the chance to cast absentee ballots after polls closed as long as they were received by 4 p.m. Monday, April 13.

The unsigned U.S. Supreme Court order was handed down by Chief Justice John Roberts as well as Justices Clarence Thomas, Samuel Alito, Neil Gorsuch and Brett Kavanaugh, all of whom were nominated by Republican presidents. They wrote their order was confined to a "narrow, technical question" about absentee ballots.

"Wisconsin has decided to proceed with the elections scheduled for Tuesday, April 7. The wisdom of that decision is not the question before the Court," wrote the justices.

Justices Ruth Bader Ginsburg, Stephen Breyer, Sonia Sotomayor and Elena Kagan, all of whom were nominated by Democratic presidents, dissented.

"The question here is whether tens of thousands of Wisconsin citizens can vote safely in the midst of a pandemic," wrote the dissenting justices. "With the majority’s stay in place, that will not be possible. Either they will have to brave the polls, endangering their own and others’ safety. Or they will lose their right to vote, through no fault of their own."

The U.S. Supreme Court's order was limited to when ballots are postmarked. Absentee ballots that are cast or postmarked by Election Day will still be counted by clerks until April 13 at 4 p.m.

When Wisconsin's bipartisan Elections Commission met Monday night to review the orders, the panel's Democratic members were still frustrated with the fallout.

"Today, I think is a very, very profoundly sad day for Wisconsin," said Mark Thomsen, one of the panel's Democratic appointees. "This is a victory you can have because I would never want this victory."

Knudson said the cumulative effect of the court rulings was clear for voters who had requested absentee ballots but had not yet received them.

"If you haven't received it in tomorrow's mail, then you need to go vote in person," Knudson said.

Anecdotally, there were stories Monday of voters throughout Wisconsin having requested absentee ballots but not receiving them.

In Milwaukee, which will operate just five polling places Tuesday instead of the usual 180, local leaders said 45,000 city residents who had requested absentee ballots still had not returned them. Milwaukee Election Commission Executive Director Neil Albrecht said that included at least 15,000 people who made requests on or just before last Friday, the deadline for requesting an absentee ballot.

"There's absolutely no way that that population will have had the opportunity to receive their ballots given postal delays, vote and return their ballots by tomorrow's election date," Albecht said.

The number of outstanding ballots is significant when compared to the last Wisconsin Supreme Court election, which conservative Justice Brian Hagedorn won by fewer than 6,000 votes.

Wisconsin's Elections Commission said clerks will be prohibited from revealing unofficial results Tuesday night, meaning the winner of Tuesday's election won't be known until next Monday.