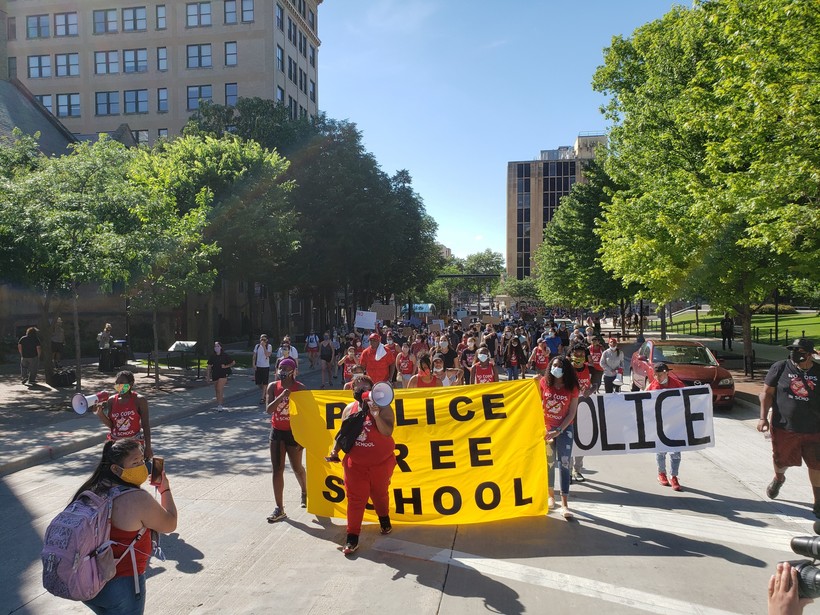 Madison activists march in favor of MMSD's board terminating its contract with the city's police department for school resource officers on Thursday, June 25. Shawn Johnson/WPR

Madison School Board Votes To End Contract With Police Department

The Madison Metropolitan School District Board of Education voted unanimously to immediately terminate its contract with the Madison Police Department Monday evening.

The vote followed years of activism by the social justice organization Freedom Inc., and reverses course from last year, when MMSD’s board narrowly voted to keep police officers in schools.

Bianca Gomez is the youth justice director at Freedom Inc., and has worked with the Freedom Youth Squad, the group that’s been leading Freedom Inc’s "No Cops in Schools" and "Police-Free Schools" campaigns.

"It’s important that we as a community celebrate this victory, because it is a huge deal, our young people deserve this more than anyone else," she said, "and that we also recognize there’s still a lot more work to be done to make sure that our schools are safe and equitable for Black and Brown children."

Gomez said that it was the students, who have gotten to know the ins and outs of school policy and organized more than 50 events in support of police-free schools, who mobilized Madison to make the unanimous vote possible.

"Our young people share their stories and their experiences, we also have the data and statistics, we also have hundreds of videos, hundreds of examples from Madison and all around the country, that show us the reality of what’s happening to our young people," she said. "We know that we have to fight as adult allies to help create safe and equitable schools for them, and removing police officers is just one step in the right direction."

Several board members emphasized that while the killing of George Floyd in Minneapolis has prompted this kind of change in MMSD and in other districts, it was just one more recent reminder after years of concerns about policing.

"I think what has always been true, but what has been exposed with events over the past month or so, is that right now the institution of policing is incompatible with -- and in fact in direct contradiction with -- what we hope to create for our learning environments for our Black students," said board member Saveon Castro.

Christina Gomez Schmidt, who nevertheless voted in favor of the resolution, had some reservations about ending the school resource officer contract so quickly. She noted that Madison Teachers Inc., the teachers' union, had advocated removing school resource officers only if 33 support staff could be added at the high school level.

"I believe we have consensus in our community and in our district and on our board that change is needed," she said. "I'm concerned that we haven't listened to our high schools fully in making this change going forward."

In ending its relationship with the Madison Police Department, MMSD follows Milwaukee, which terminated its contract with the Milwaukee Police Department for school resource officers earlier this month, and districts in Minneapolis, Denver and Portland, Oregon.

For those who have been pushing to remove school resource officers from schools, terminating the contract is just the beginning. They want to see that money that paid for officers in schools — around $380,000 per year according to the contract passed last year — and more reinvested in students in the form of transformative justice training, housing and transportation help and other supports for students. Gomez, with Freedom Inc., said many of the practices students and families want to see to make schools more welcoming were outlined in last year's Black Excellence report.

"Our younger people have been saying what they need to feel better in schools, to feel safer in schools, and to feel more welcome in schools," she said. "I think those are the proposals that we need to listen to."

Reyes prefaced her vote by thanking the school resource officers who have worked in MMSD over the years.

"Since George Floyd’s murder and the continued demands to remove school resource officers, I’ve had to put aside my own personal and professional views about police in schools," she said. "Now is the time for all institutions to take a hard look at what they do and how they do it, and how they feed into the racist practices within their own institutions in our community."