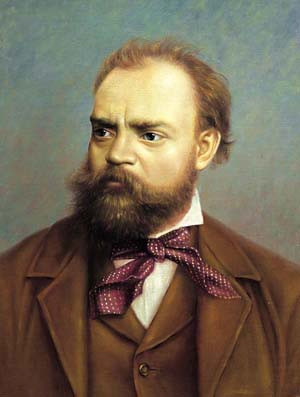 When celebrated Czech composer Antonín Dvořák stepped onto the pier in New York on September 26, 1892, he was welcomed as the future discoverer of American music. During his two-and-a-half-year tenure as the director of the National Conservatory of Music in New York, Americans got to hear a variety of his works and he wrote some of his most important music.

But during his lifetime, an important part of his music never got a hearing in America—opera.

Dvořák did what he could. The founder of the National Conservatory, Mrs. Jeanette Thurber, was so ardent in her appreciation of opera that in 1886 she had founded the American Opera Company for the purpose of producing operas in English. After its second season the company folded, but she pressed on with a composition contest that would award its grand prize to an outstanding opera.

No worthy opera emerged, so the irrepressible Mrs. Thurber suggested to Dvořák that he compose an opera on an American theme.

He liked the idea of writing an opera based on Longfellow’s poetic narrative The Song of Hiawatha, which he had read in a Czech translation. He was going to begin as soon as he found a libretto, but no one ever came up with a prose version of Longfellow’s dactylic hexameter, and nothing ever came of the project except for a few sketches that apparently wound up in his New World Symphony.

In 1894 and ’95, in New York, after putting the finishing touches to his grand opera Dmitirj, begun back in 1881, he returned to Europe.

So America had no opera from him, and, although he devoted the last several years of his life to writing operatic works, not until long after Dvořák’s time, in 1935, would America see its first Dvořák opera, when a suburban Chicago Czech-American civic organization put on a performance of his 1900 opera Rusalka.