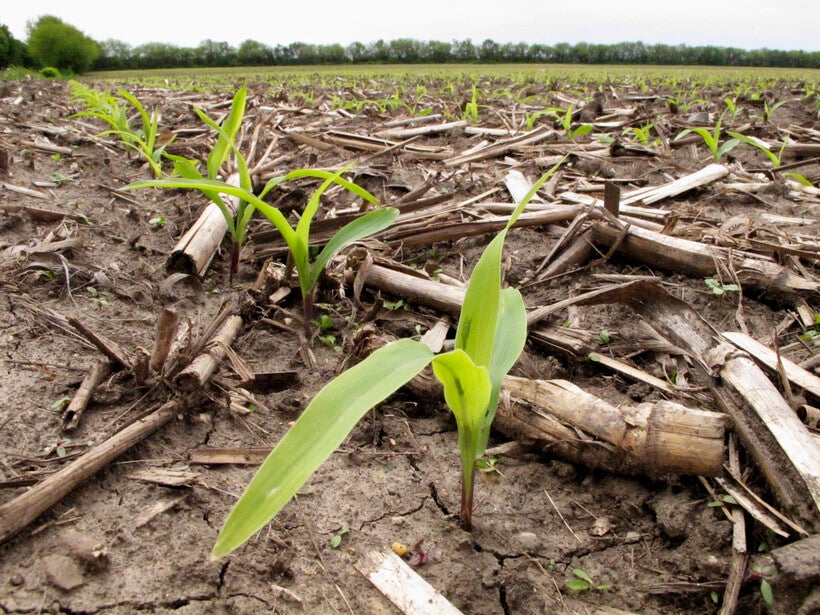 Recently sprouted corn plants grow in a field in Savoy, Ill., on May 16, 2016. A new study from the University of Illinois on the Illinois River has found lower levels of nitrates that wash off of farm fields in recent years. David Mercer/AP Photo

While a growing number of lawsuits have been filed over a chemical in Roundup, new survey data shows many Wisconsin farmers use the herbicide.

The National Agricultural Statistics Service found 42 percent of corn acres and 67 percent of soybean acres were treated in 2018 with a type of glyphosate, the active ingredient in Roundup.

A California court awarded more than $2 billion to a couple who claim the herbicide caused their cancer. It's the third case decided against Bayer, the parent company of Roundup-maker Monsanto.

University of Wisconsin-Madison regional agronomist Richard Proost said he’s not sure what farmers think of the recent lawsuits. But he said many producers would be affected if glyphosate was taken off the market.

"Looking at specifically no till and things like that, I think people are going to have to change their management systems," Proost said. "Can we live without it? Yeah, but it's going to change things a lot."

Proost said most farmers use herbicides like glyphosate sparingly because they're an added cost to production.

The NASS survey found 97 percent of planted acres of corn and 98 percent of planted soybean acres in Wisconsin were treated with some type of chemical herbicides last year. The rates match the percent treated throughout an 18 state region included in the survey.

But Rodrigo Werle, cropping systems weed scientist at UW-Madison, said Wisconsin farmers have an advantage over some of their neighbors when it comes to herbicide, especially in lower Midwest states.

"Because in Wisconsin we have diversified crop rotations and tillage is a common practice, farmers in our state here, they tend to use less herbicide," Werle said.

Werle said producers in states to the south of Wisconsin commonly apply herbicide three times throughout the growing season. But he said Wisconsin and the rest of the upper Midwest have a shorter growing season.

"Forty to 50 percent of our farmers still get their weed control in a one-pass herbicide program meaning we’re putting less herbicides out there," Werle said.

But with growing concerns about groundwater quality and herbicide-resistant weeds, Werle said new attention is being paid to alternative management practices.

"I think farmers are realizing that managing weeds with herbicides alone won’t be a sustainable strategy, particularly because we haven’t had a new herbicide in 30 years," Werle said.

He said researchers are looking at things like cover crops and new planting dates to help farmers cut back on herbicides without losing yields.