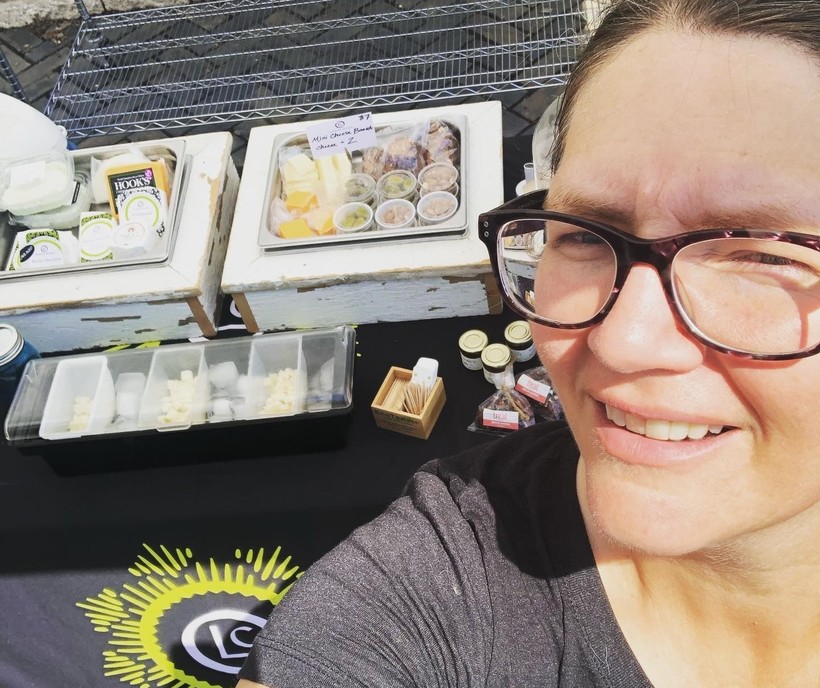 Anna Landmark is co-owner of Landmark Creamery and is part of the steering committee for Opportunity Wisconsin. Photo courtesy of Anna Landmark

A new progressive group wants to tell stories of how the economy is failing working people in Wisconsin. It's part of a broader push among liberal political groups and donors to try to get their message out ahead of the 2020 presidential election.

Anna Landmark is part of the steering committee for Opportunity Wisconsin, a group which has its official launch Thursday. She's co-owner of Landmark Creamery, a small cheesemaker headquartered in Paoli, southwest of Madison. She said she wanted to join the advocacy group after seeing the way the dairy crisis hit farmers across the state and in southwestern Wisconsin in particular.

"It's been really painful watching what’s been happening and … watching all these small farms going under," Landmark said.

Throughout 2019, she said, she regularly fielded calls from dairy farmers desperate to find a new buyer for their milk.

"It was kind of heartbreaking to have to say, 'I'm sorry, I can't buy any more milk at this point,'" she said. For small farmers, "there's so much that we could be doing."

Landmark hopes Opportunity Wisconsin can help to highlight those farmers' stories, as well as the stories of workers who’ve faced layoffs or are working multiple jobs to stay afloat. Opportunity Wisconsin plans to host listening sessions and roundtable discussions in different parts of the state. They'll help members write op-eds and letters to the editor, and try to build a grassroots campaign through organizing and social media.

Opportunity Wisconsin is not directly focused on the 2020 elections right now, Landmark said, "but there is an opportunity for us to educate the public. We're seizing an opportune window."

The nonprofit organization is officially nonpartisan, and an Opportunity Wisconsin spokesperson declined to release information about its donors. But it's clearly situated on the left side of the political spectrum, with a focus on critiques of the Trump administration's tax and trade policies. It's one of a number of new liberal groups ramping up ahead of the 2020 elections, where Wisconsin is expected to be a crucial swing state.

Some of that will come from campaigns and outside advocacy groups in the form of political ads and mailers. Increasingly, though, Rothschild said both sides of the political spectrum are trying to create their own media infrastructure, too.

Conservatives have long dominated the commercial talk radio airwaves. In Wisconsin, conservative organizations help to fund right-wing news online as well at outlets such as the MacIver Institute. Another conservative Wisconsin outlet, Right Wisconsin, is ad-supported. In recent months, though, two new online news outlets with left-wing ties in Wisconsin have launched: the Wisconsin Examiner and Up North News.

"Frankly," said Rothschild, a former editor of The Progressive magazine, "it's taken forever for left-wing donors to recognize the importance of competing in the media arena."

A widening division between right-wing and left-wing media raises concerns, Rothschild said, if there aren't shared spaces for open debate. But having more voices and more outlets in Wisconsin’s conversation, he said, can be a good thing.

Landmark said she's concerned about the affect a decline in newspaper journalists has had on rural areas in Wisconsin, which may find there are fewer chances to have their stories heard.

"I want to tell what's happening in our rural places," she said.

Correction: An earlier version of this story misstated the website Right Wisconsin's funding sources. The story has been updated.