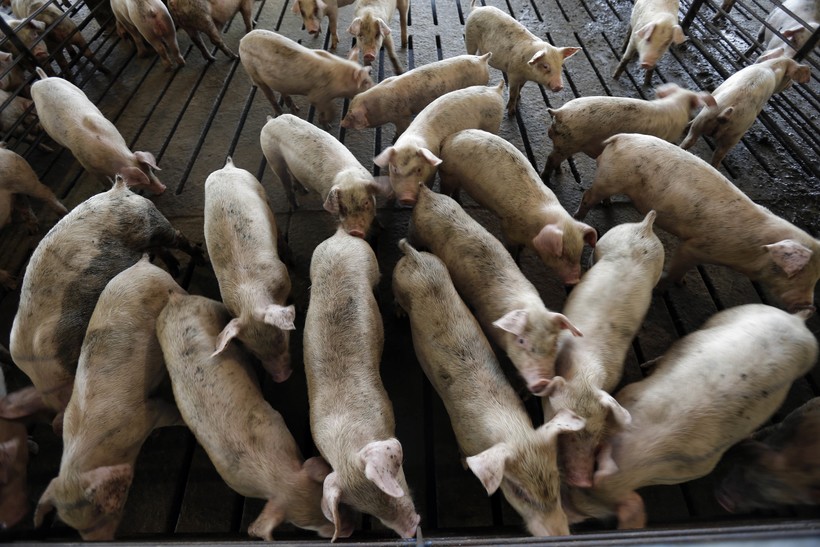 In this July 21, 2017, photo, young hogs are seen at Everette Murphrey Farm in Farmville, N.C. After President Donald Trump announced plans to impose tariffs on products including Chinese steel, the Chinese government responded Friday, March 23, 2018, with a threat to add an equal 25 percent charge on U.S. products including pork. Gerry Broome/AP Photo

As a trade war between China and the United States continues, Wisconsin farmers are feeling the effects.

New U.S. tariffs on Chinese goods went into effect early Friday morning. In response, China released their own taxes on many U.S. products, including soybeans, pork and dairy products.

The two countries began trading tariffs after the Trump administration announced in May that it would impose new tariffs on steel and aluminum.

Mark Stephenson, director of dairy policy analysis at the University of Wisconsin-Madison, said it's reminiscent of the "guns versus butter" model in economics.

Normally, the concept is used to talk about the relationship between a country's investment in defense versus civilian goods. But Stephenson said it feels relevant on the issue of tariffs.

"Right now, agriculture in particular, and dairy for us especially, is just getting the blowback of these retaliatory tariffs on steel and aluminum," Stephenson said.

Stephenson said the new tariffs have already caused Class III futures prices to decline by $2 per hundredweight, or 100 pounds of milk.

"Going into our fourth year of relatively low milk prices and now seeing the price that had been recovering stumble, and significantly stumble, it's not a good thing," Stephenson said. "So producers are not feeling good about that impact of tariffs."

While many dairy farmers are opposed to the trade war, Stephenson said some producers believe the measures could lead to a more fair trade relationship.

And Vaassen said the tariffs have significantly impacted prices.

"Economists are indicating to us that if you base that (decline) on an annualized market price, U.S. pig farmers have collectively lost over $2 billion already from the beginning of March," Vaassen said.

While producers have benefited from lower feed prices thanks to the tariffs, Vaassen said Wisconsin farmers are losing money on every hog they sell.