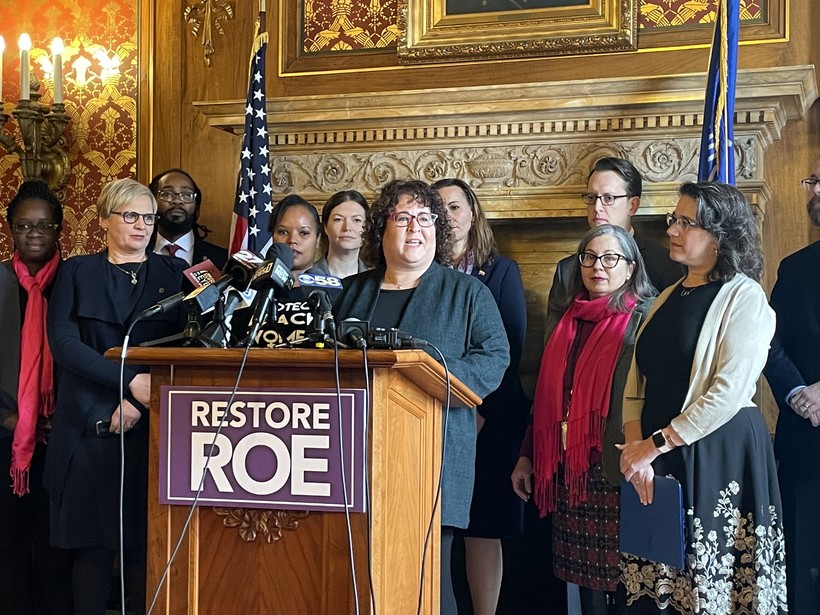 State Rep. Lisa Subeck, D-Madison, speaks during a news conference on Monday, Jan, 23, 2023 at the Wisconsin Capitol. Subeck is among the sponsors of a joint resolution seeking to ask voters in April 2024 whether they support repealing an 1849 state law that bans non-life-saving abortions. Sarah Lehr/WPR

The latest proposal would ask voters in 2024 whether they think Wisconsin should overturn its abortion ban
By Sarah Lehr
Share:

As the nation marks half a century since the U.S. Supreme Court's Roe v. Wade decision, Wisconsin Democrats are once again attempting to ask voters to weigh in on abortion.

A joint resolution introduced Monday would ask Wisconsin voters in April 2024 whether they support repealing a 19th-century state law that bans non-life-saving abortions while "restoring the constitutional rights guaranteed under Roe v. Wade."

The measure would be non-binding, but it nonetheless faces an uphill battle to get to the ballot in Wisconsin, where Republican lawmakers don't support the full repeal of Wisconsin's abortion ban.

"I think we all know that legislative Republicans are scared to be putting this on the ballot because of their antiquated views," Agard said. "Because they know that they are out of line and out of touch with the people of the state of Wisconsin." 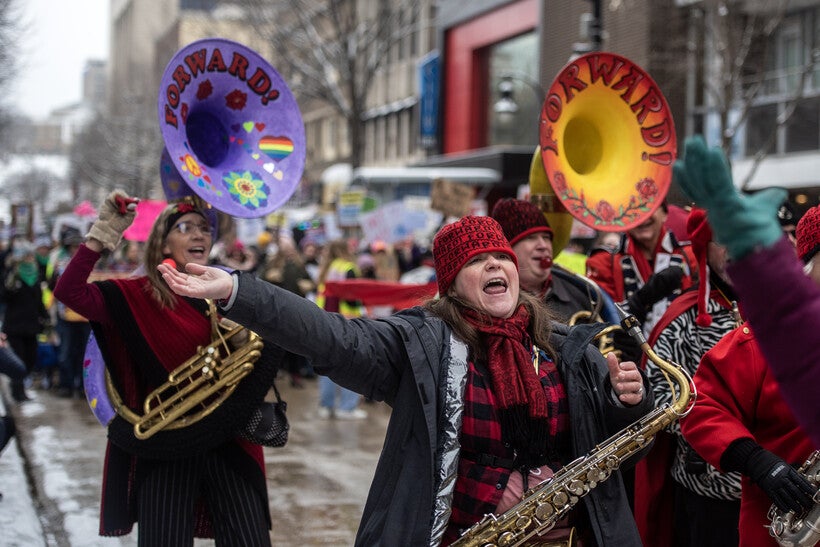 Members of the Forward Marching Band perform at a march on the 50th anniversary of Roe vs. Wade on Sunday, Jan. 22, 2023, in Madison, Wis. Angela Major/WPR

Last week, Wisconsin Republicans rejected an attempt by Democrats to bring a similar non-binding referendum on abortion to the ballot this spring. The timing of that proposal could have driven up Democratic turnout during the crucial April 4 election that has the potential to shift the ideological balance of Wisconsin's Supreme Court.

Instead, GOP lawmakers approved two other measures for this April's ballot. One will ask voters to change the state's Constitution by adding criteria for judges who impose cash bail. The other referendum, which is strictly advisory, will ask voters whether they think "childless, able-bodied adults" should be required to search for work in order to receive public benefits.

Democratic Gov. Tony Evers has also pushed — unsuccessfully — to try and let voters repeal Wisconsin's abortion ban by giving them the power to amend the state's Constitution. Evers' plan, if it had been approved, would have eventually given voters the power to bypass the Legislature altogether if they gathered enough signatures to bring issues directly to the ballot. In Michigan, that process, called a citizen-initiated referendum, is already allowed. Voters there used it this fall to add the right to abortion to Michigan's Constitution. In Wisconsin, GOP lawmakers rejected Evers' plan.

The timing of Democrats' latest attempt has added resonance, said state Rep. Lisa Subeck. The Madison Democrat introduced the joint resolution calling for an advisory referendum on Monday, a day after more than a thousand people marched in Madison to call for abortion access on the 50th anniversary of the Roe v. Wade decision.

"We have worked for years to try to overturn this ban, yet our pleas have fallen on deaf ears," Subeck said. "People across the state have called out and said they want the freedom to be able to make their own health care decisions and their own family planning decisions, in consultation with their physicians, with their families and their faith and without interference from politicians. The last person who I want to see in my physician's office is a Supreme Court justice, the president of the United States or Robin Vos, for God's sake."

Days after the U.S. Supreme Court overturned Roe v. Wade in June, Wisconsin's Democratic Attorney General Josh Kaul sued to block enforcement of the 1849 state law that makes providing an abortion a felony unless it's done to save a pregnant person's life. That lawsuit is ongoing in Dane County Circuit Court.

Republican lawmakers are poised to add two referendums to Wisconsin's April ballot in what Democrats are calling a blatant attempt to drive up GOP turnout for the state's critical Supreme Court election.

The GOP ballot questions include one introduced only days ago...

More than a thousand march to restore abortion access in Wisconsin

At least a thousand people rallied at the Wisconsin State Capitol on Sunday to demand an end to the state's ban on abortions and mark the 50th anniversary of the passage of Roe v. Wade.