More than a thousand march to restore abortion access in Wisconsin

At least a thousand people rallied at the Wisconsin state Capitol on Sunday to demand an end to the state's ban on abortions and mark the 50th anniversary of the passage of Roe v. Wade. The landmark legal decision granted women a constitutional right to abortion access and was overturned by the U.S. Supreme Court last summer.

It was part of a nationwide day of action put on by the Women's March, an organization that mobilized in the wake of the election of former President Donald Trump. Similar events took place across the country, but the rally in Madison was different.

It was the flagship event, organizers said, intended to draw attention to the upcoming state Supreme Court election, which could flip the court's ideological balance. Abortion supporters hope that electing a liberal-leaning judge will help them overturn Wisconsin's abortion ban.

"This is the single place in 2023 that really does reflect that abortion rights are on the ballot," said Knox. "The single most important thing that people can do across the country is invest some of their time over the next two and a half months in Wisconsin."

The day kicked off with chanting and a rally in below-freezing temperatures on the University of Wisconsin's Library Mall. Protesters then made their way up West State Street toward the Capitol, where national and local leaders gave speeches. 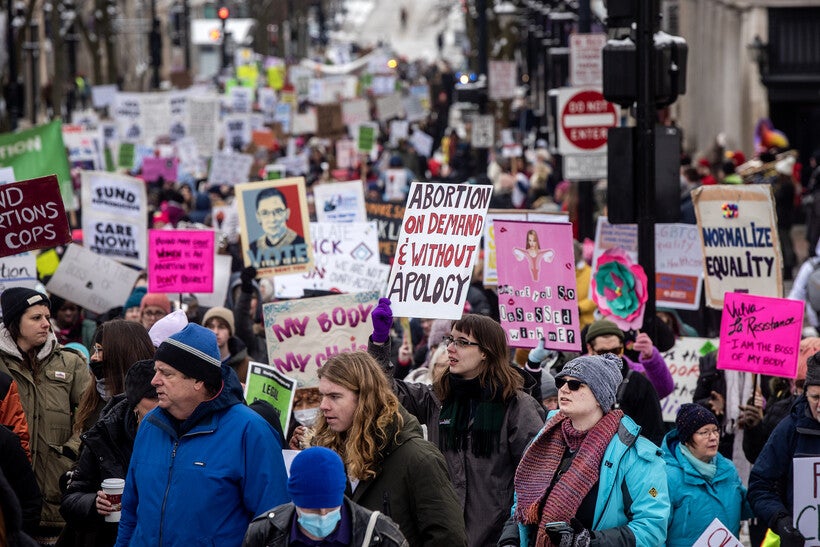 People waved hand-painted signs saying things like, "Abortion is normal'' and "Keep your beliefs out of our briefs." At the procession's helm were activists from MARRCH, the Madison Abortion and Reproductive Rights Coalition for Healthcare, which was formed in the immediate aftermath of the repeal of Roe vs. Wade and was the local partner for the day's event.

The crowd represented a range of ages and viewpoints – some signs called for the abolition of the U.S. Supreme Court, while others quoted from the words of the late Justice Ruth Bader Ginsberg. The Forward! marching band played, and families pushed babies in strollers.

And some participants wore the bright pink knitted hats that became a symbol of the first Women's March, held in Washington, D.C. in 2017.

Sandy Miller, 42, and her daughter, Scarlett Dudding, 13, were among those re-wearing their pink hats. Their whole family had driven from Madison to DC in 2017 for that first event, and stayed involved in this issue for years after.

"It's our future," said Dudding. "And I don't want to live in a world where I didn't stand up for what's right, and I didn't not only fight for my basic human rights, but also I don't want to see a daughter or a sister or a friend have to struggle through something that shouldn't be their fault, and they shouldn't need to worry about."

Capitol police estimated that more than 1,000 people turned out on Sunday, and said no incidents were reported. 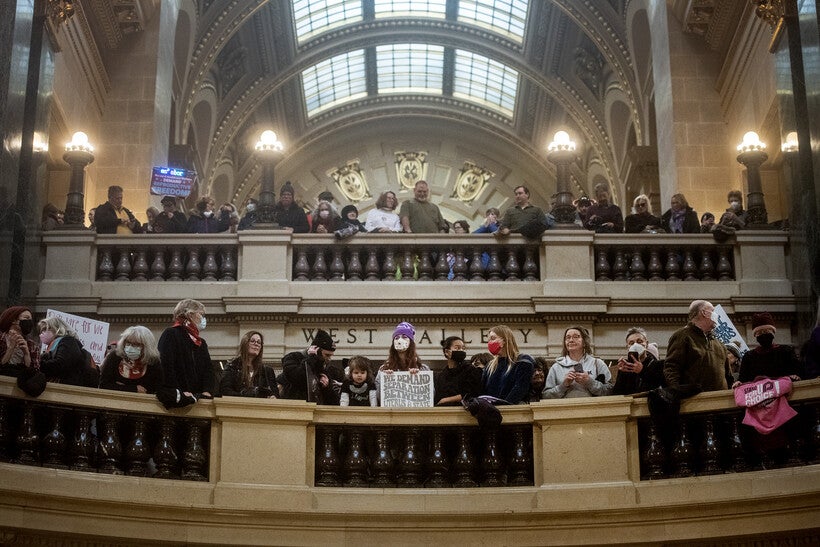 Wisconsin is the battleground for a nationwide strategy

The theme of Sunday's event was moving the abortion-rights movement to the state level. Wisconsin's Supreme Court election could provide a roadmap for abortion-rights activists to enshrine reproductive laws at the state level following the repeal of Roe, said Tamika Middleton, managing director of the Women's March.

Wisconsin was one of 13 states where a previously defunct law banning abortion was immediately triggered when Roe vs. Wade was struck down in June. The Wisconsin law banning nearly all abortion in the state was passed in 1849. Activists at Sunday’s march hope that voters will elect a liberal-leaning Supreme Court judge, and that the court will then repeal the 1849 ban.

Sunday's speakers urged attendees to vote against the two conservative-backed candidates for that race. They also called for a restoration of abortion access in Wisconsin, and for a portion of the state's budget surplus to help Wisconsinites seek abortions out of state in the meantime.

And many decried the law on the books as being antiquated. 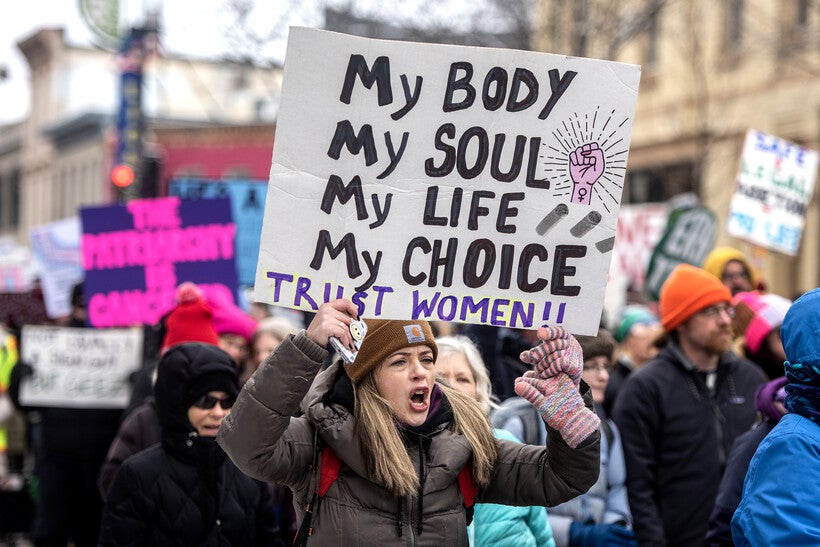 Protester Jana Goodman chants and holds up a sign during a march for abortion rights on the 50th anniversary of the Roe v. Wade ruling Sunday, Jan. 22, 2023, in Madison, Wis. Angela Major/WPR

For many rally-goers, the fight at home was deeply personal.

Maureen and Jon Miner brought their three-year-old daughter to the rally. Rosemary Miner sat atop her dad's shoulders in a snowsuit and pink knitted hat.

"I can't imagine a world where she doesn't have the rights to have whatever she needs," said Jon.

Sarah Bousman, 34, and her mother, Lynn Duane, 66, were there with Bousman's two daughters – ages three and a half and one and a half – bundled up in a stroller. Bousman said she had brought her family because she had had an abortion procedure following a miscarriage and medical issues five years earlier.

"Without the abortion that I had, I don't think these two children would be here today. I don't know what would have happened," said Bousman.

"It's just absolutely devastating and terrifying and heartbreaking that we might live in a world where my girls would have fewer rights," she added.

At a similar rally in Tallahassee on Sunday, President Joe Biden announced that he would sign a presidential memorandum that would urge federal agencies to "consider new guidance" that would expand access to medication abortion, even in states with abortion bans.

According to Marquette Law School research, an average of 60 percent of Wisconsinites have expressed support for abortion in "some or all cases" over the last decade.

Wisconsin's Supreme Court primary will take place Feb. 21, and the top two vote-getters will be on the general election ballot on April 4. 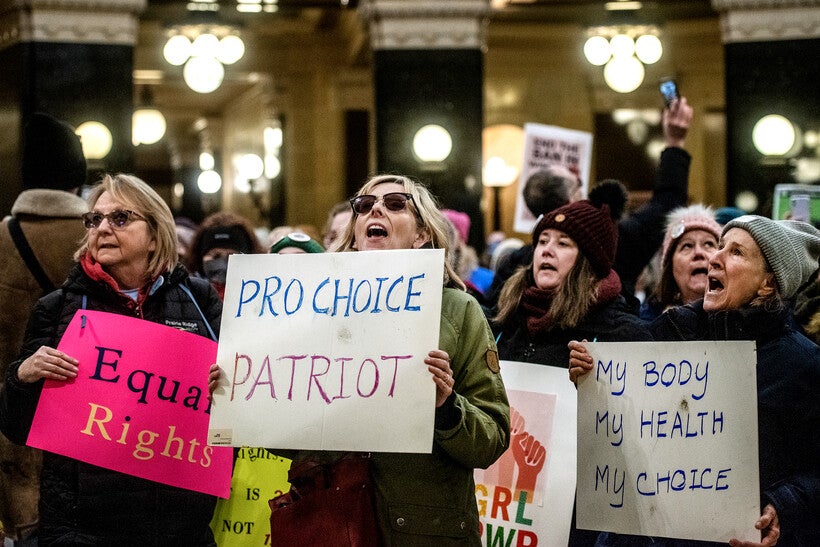