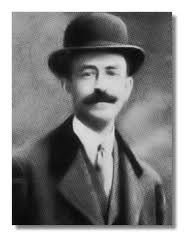 In the early twentieth century, many Spanish composers traveled to France for training, and a fair number of French composers went to Spain for inspiration. The friendship of Manuel de Falla and Claude Debussy is a prime example.

When Falla arrived in Paris from Madrid in 1907, he soon met a host of celebrated musicians from various countries.

The most renowned of them all was Claude Debussy, whom Falla failed to recognize at first because he was dressed more like a sailor than a famous composer, but it didn’t take long for the Frenchman’s well-known sardonic sense of humor to manifest itself.

“It is I,” Debussy assured the Spaniard. “It is I myself.”

In an effort to get a conversation going, Falla said that he had always liked French music.

Having been notified by composer Paul Dukas that “a little Spaniard dressed all in black” was coming to see him, Debussy asked Falla to play his opera La vide breve on the piano. Debussy listened attentively to the whole thing and had good things to say about it.

The two became good friends. After seven years in Paris, Falla returned to Spain and entered the most productive stage of his composing career. In 1920, not long after Debussy’s death, Falla wrote an article for the Revue Musicale in Paris in which he alluded to a reciprocal relationship between the music of Spain and France, saying that Debussy

Unquestionably, I venture to say, unconsciously, created Spanish music the likes of which aroused the envy of many who knew her all too well. He crossed the border only once, and stayed for a few hours in San Sebastian to attend a bullfight—little enough experience indeed. But he retained a vivid memory of the unique light in the bullring, the amazing contrast between the side flooded by sunlight and the one in shadow…

“He has paid us back so generously,” Falla concluded, “that it is Spain who is today the debtor.”