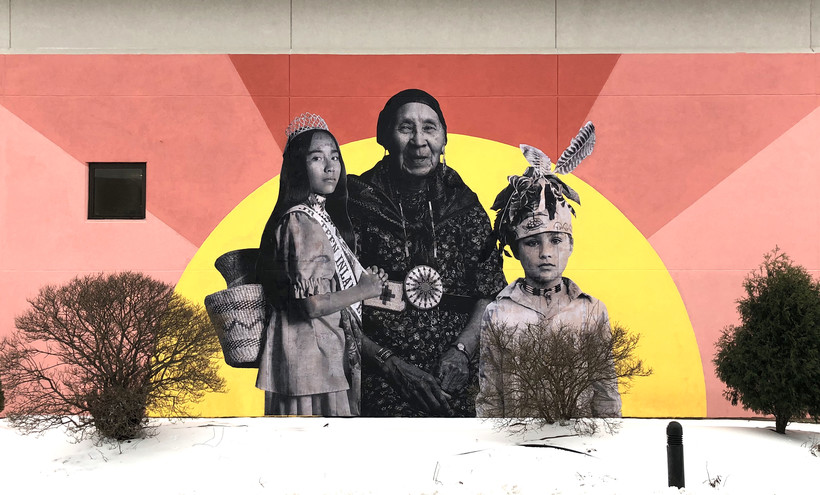 A mural on the north-facing wall of the Buchanan Kiewit Wellness Center building is the first piece of contemporary Native American artwork exhibited on the side of one of their buildings. Photo courtesy of Lawrence University.

Whenever Taneya Garcia walks past the new mural on Lawrence University's campus, she can't help but smile.

Garcia was part of a group of more than a dozen Native American students from Lawrence University and the University of Wisconsin-Green Bay who spent a week creating a mural on the north-facing wall of Lawrence University's Buchanan Kiewit Wellness Center that was unveiled Thursday.

The 19-year-old freshman — who helped install the mural — said it showcases the university's ties to indigenous people.

Made of wheat paste, the mural portrays three Native American figures: Angelina Des Rosiers, who was named Junior Miss Inland Empire in 2017; Jennie Parker of the Northern Cheyenne Tribe; and 9-year-old Daniel Clay Stevens of Oneida Nation. Their images, in black and white, stand in stark contrast to the bright yellow sun and pink rays that serve as the background.

"Everyone decided on the brightest color," Garcia said. "We wanted everyone to see it."

Like other Native American students on campus, Garcia feels a connection to the cast in the mural, she even catches herself saying "Hello Jennie, hello Princess," — a nickname the students have given to Des Rosiers because she was crowned the Inland Empire.

Students created the mural with guidance from Matika Wilbur, a photographer from the Swinomish and Tulalip tribes who has spent the past seven years traveling the country, capturing photos of Native Americans as part of Project 562 — a reference to the number of federally recognized tribes when the project began in 2012.

Garcia said a lot of students in the Native American community look up to Wilbur for the work she's done to represent Native Americans positively. So, it was especially exciting when Brigetta Miller, advisor of the student group Lawrence University Native Americans (LUNA) and an associate professor of music in the Lawrence Conservatory of Music, told her advisees Wilbur was interested in working with them. "I think a lot of us in the group were really excited," Garcia said, adding that Native American students met with Wilbur the Friday before her week-in-residence at Lawrence to discuss what the mural might look like. The students explained they wanted to tie the mural to the Menominee or Oneida tribes because of their proximities to Lawrence, and chose photos from Wilbur's collection that highlighted that relationship.

As part of her visit to Lawrence, Wilbur delivered a convocation speech centered around her experiences meeting members of tribes from North America and beyond. When she completes her travels in about six months, she will have visited nearly 900 tribal communities in total.

"I don't know that I'm necessarily trying to capture anything — that's kind of a colonizer's position, like I'm coming to your community wanting something from you," Wilbur said. "I try to take more of an approach of service and ask myself how I can be useful to the communities that I'm photographing."

Wilbur spent time at Lawrence talking with students about the ways they see themselves represented and how they can "indiginize" education. She said the students were inspired and enthusiastic, and was particularly impressed by their hard work. Garcia said she especially appreciated that, despite some 16-hour days to complete the mural and wintry conditions that delayed work, the project brought together Native students who created something for the campus that celebrates its Native ties.

"We created a family in this," Garcia said. 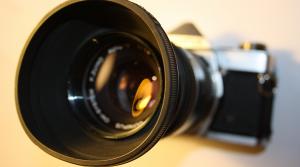 In Project 562, a Native American photographer is seeking to take pictures of members of all 562 Native American tribes to combat the misrepresentation of them in the media. She joins us to discuss the project and the misconceptions she hopes to dispel.