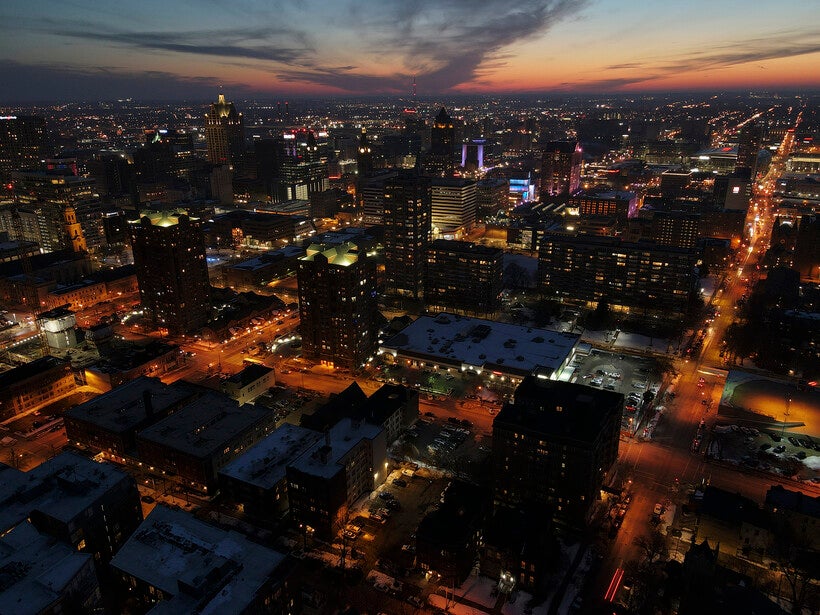 This image taken with a drone shows the Milwaukee skyline at sunset Saturday, Feb. 27, 2021, in Milwaukee. Morry Gash/AP Photos

Milwaukee has had 35 homicides so far this year
By Corrinne Hess
Share:

Milwaukee’s acting mayor, Cavalier Johnson, is calling on the state Legislature to use a portion of the nearly $2.9 billion budget surplus to help the city address its unprecedented challenges with public safety.

Over the weekend, two children — ages 10 and 15 — were murdered in separate incidents. To date, Milwaukee has had 35 homicides. Last year, the city did not reach 35 homicides until April 5, according to the Milwaukee County Medical Examiner’s Office.

"As the state racks up billions of dollars in surpluses, state shared revenue funding remains at levels set decades ago," Johnson said.

On Jan. 25, the nonpartisan Legislative Fiscal Bureau told lawmakers the two-year budget's general fund was now projected to end with a balance of more than $3.8 billion. That's nearly $2.9 billion more than the office estimated last year.

Gov. Tony Evers wants to use the surplus on a tax cut and education spending. He’s expected to promote his plan at Tuesday's State of the State address.

Johnson, who is running for mayor of Milwaukee, said had state shared revenue kept pace with inflation, the city of Milwaukee would have received between $100 million and $200 million more each year since 2003 to invest in law enforcement, violence prevention, and other basic city services.

He said the state should be giving that money to Milwaukee annually, adding that other cities across Wisconsin should be receiving their fair shares, too.

"The trend has required budget cuts in Milwaukee — leaving us with fewer police and firefighters, service cuts, and an often fruitless hunt for additional resources," Johnson said.

Johnson said the problem is compounded because Milwaukee and other Wisconsin cities are restricted by the taxes and fees they can collect. He pointed to a recent Wisconsin Policy Forum study looking at how the budget surplus could improve relationships between state and municipal governments.

"The state’s unprecedented fund balances and surging tax collections may now offer the best opportunity in decades to reconsider the local government revenue structure and ensure appropriate capacity for the delivery of vital services by county and municipal governments across Wisconsin," the Forum study says.

The study did not recommend any specific uses for surplus dollars.

"Our observation is that this is really beginning to take its toll from a service perspective in areas like public safety that one would imagine would generate concern across the political spectrum," Henken said. "Given that the state finds itself with a sizable general fund balance and a very healthy rainy day fund, to the extent that a lack of state funds has been a barrier to address this, then this oughta be looked at."

In October, the Evers administration allocated $45 million in federal funds to bolster violence prevention efforts and services for victims in Wisconsin. The city of Milwaukee received $8 million.