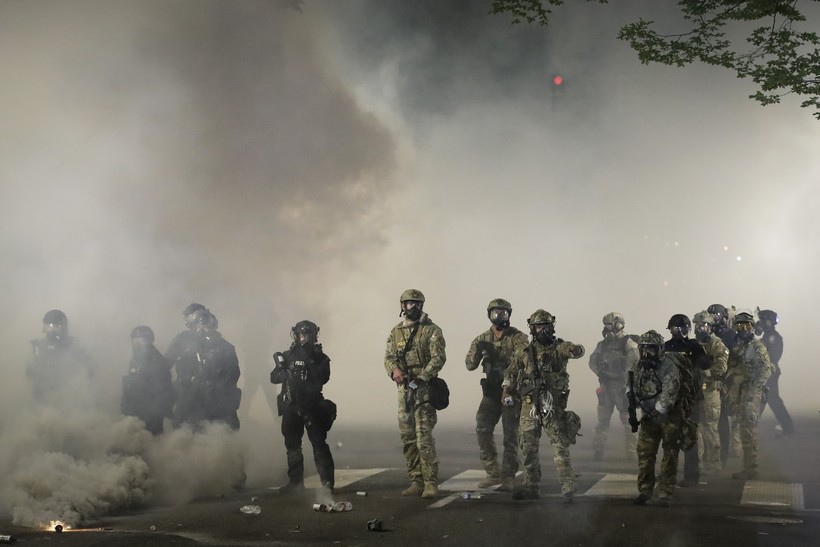 Milwaukee Police, Mayor Are Among Those Denouncing Plan To Send Federal Agents To City

Milwaukee leaders including Mayor Tom Barrett and the police department are among those criticizing a White House plan to send federal agents to the city within the next three weeks.

Milwaukee is one of five cities that will see a surge of federal officers in coming weeks as part of President Donald Trump’s "Operation Legend" to combat crime. The White House said the influx of agents is in response to a rise in violence in the city.

The announcement has been criticized across the state by officials including Attorney General Josh Kaul and Lt. Gov. Mandela Barnes, who are concerned after federal agents used violent force against protesters in Portland, Oregon.

"I maintain that this is a very ridiculous decision and this is a president that is trying to save himself," Barnes said during a call with WPR Friday. "The last thing we need is more militarized presence at a time like this, and on top of all of that, I just don't trust the president. If (Portland) was the pilot program, we're all in trouble. The mayor of Portland, the governor of Oregon and two state senators have all called for the removal of these federal officers."

Milwaukee Mayor Tom Barrett agreed, saying given what has taken place in Portland, he's worried about his city.

"I am extremely concerned that President Trump is looking for opportunities to create more political division in cities across the nation," Barrett  said. "Federal agents are not welcome here for that purpose."

Operation Legend was formerly "Operation Relentless Pursuit," a program launched late last year to address violent crime, drug trafficking and the illegal use of firearms. Officials recently renamed the project after LeGend Taliferro, a 4-year-old who died from gunfire in Kansas City, Missouri this June.

When the project launched, Barrett and the Milwaukee Police Department supported the effort and the city was granted $9.7 million as part of the program. The department said in a statement on Thursday that "despite the name change, the focus of this operation remains the same, and we remain committed to our partnership."

However, the department does not want federal agents coming to Milwaukee.

"The Milwaukee Police Department respectfully declines the deployment of federal agents in Milwaukee for this purpose. We look forward to continuing to work with our federal partners on other joint initiatives such as those addressing violent crime, drug trafficking, internet crimes against children, and human trafficking," the statement says.

Milwaukee has had a violent year. Homicides in the city are double what they were in 2019. The number of non-fatal shootings are up as well.

Milwaukee County Executive David Crowley has also said he doesn’t understand why the agents are coming.

"I think it would be harmful, more of an escalator," Crowley said when asked about the federal plan during a coronavirus briefing Thursday. "We have seen them in Portland. We have been able to talk and have conversations locally, and when you have seen protests in Milwaukee County, they have been extremely peaceful."

Gov. Tony Evers has likewise denounced the plan. He sent a letter to Trump this week expressing his concern about federal agents coming to Milwaukee.

"This is a vital moment in history as folks across the country confront the structural racism that has created inequalities for far too long," the letter states. "This is not a moment to double down and unnecessarily increase police presence, especially without invitation."

Wisconsin Attorney General Josh Kaul said under ordinary circumstances, he would welcome assistance from federal resources to help solve and prevent violent crimes in Wisconsin, but the Trump administration needs to be met with great skepticism.

"I don’t use the phrase 'fascist tactics' lightly. But there is no more accurate way to describe this administration’s repeated resort to and incitement of racism, xenophobia, and violence," Kaul said in a statement.

Meanwhile, the Milwaukee Common Council will vote Tuesday to support an ordinance that would require federal law enforcement officers to wear visible identification markers while on duty.

"In light of the federal government’s recent actions in Portland and the imminent suggestion that they may do the same in other cities, including Milwaukee, I want this city to be on record in support of legislation that curbs this behavior and aids in transparency," Alderwoman Milele Coggs said in a written statement.