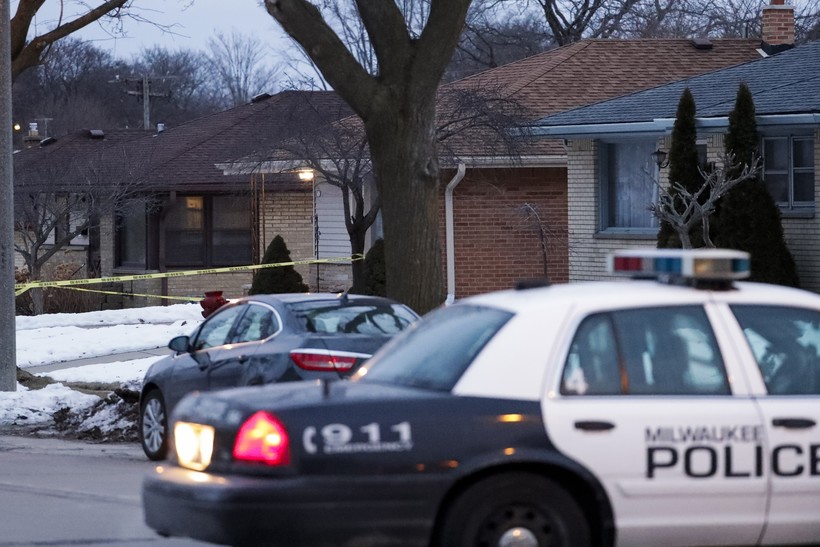 Police are seen outside of a house near Potomac and Courtland after a shooting at Molson Coors, Wednesday Feb. 26, 2020, in Milwaukee. Morry Gash/AP Photos

County Has Recorded 80 Homicides, 73 Of Which Happened In City Of Milwaukee
By Corrinne Hess
Share:

Homicides have nearly doubled in Milwaukee County during the first six months of the year compared to the same time last year, according to the county medical examiner’s office.

Seventy of the 80 homicides in the county were the result of gunshot wounds, Domagalski said.

"If the police kill someone, they don’t include (that as a homicide)," she said. "If someone else shoots, but the shoot is justified — the DA rules it justified, which happens quite often — they don’t count it as a homicide. We do."

Domagalski doesn’t know why there has been a spike in homicides this year, but noted that there have been three mass killings — one workplace shooting, and two incidents of domestic homicide — which account for 13 of the victims.

When asked about the high homicide numbers, the mayor replied with a statement acknowledging the increase, and saying that "questions have been raised about the staffing levels" in the Police Department. He said that there were 17 fewer officers on staff in the department's most recent pay period, compared to the same time last year.

The Milwaukee Police Department did not respond to a request for comment. During an interview with the Milwaukee Press Club in April, Chief Alfonso Morales said the new coronavirus pandemic had forced the department to be "reactive" rather than "proactive" in its policing to avoid exposing his officers to COVID-19.

Morales also said that domestic violence and intimate partner violence has been a driver of violent crime.

"Our homicides are up, our non-fatal shootings are up, and several of (those are) from domestic violence," Morales said. "We wanted to address that. We brought a group of leaders together in the beginning of February to really take a deep dive into domestic violence. Unfortunately, with the pandemic, it has restricted our ability to convene."

Milwaukee Common Council President Cavalier Johnson says it is troubling when there is a spike in the homicide or non-fatal shooting rate.

Johnson said the combination of the mass shootings, coronavirus pandemic keeping people at home and increase in domestic violence is what he believes has led to the increase.

"When people are in close confines for months on end, unfortunately these things happen,” Johnson said. “Domestic violence is something we deal with every day of the year. But couple that with people not getting out, financial strains, that may unfortunately result with domestic violence increasing and the rise in homicides in Milwaukee.”

The medical examiner's office does not keep statistics on homicides due to domestic violence.

In 2019, homicides in Milwaukee were down 12 percent from 2018, and down 24 percent from 2017. During an October interview with WPR, Morales pointed to those numbers as well as a downturn in non-fatal shootings in 2019 as a reason he should be re-appointed police chief.

"In the prior 10 years, we were well over 500 (non-fatal shootings) every year," Morales said in October. "No shooting and no homicide is acceptable. But that’s a goal I cannot obtain. But I would like to keep our non-fatal shootings under 300 a year."

He was reappointed by the Fire and Police Commission in December. The Commission will do a routine review of Morales on July 16.

Milwaukee Alder Jose Perez also introduced a resolution Monday, co-sponsored by 10 Common Council members, that would reduce the Milwaukee Police Department budget by 10 percent, or about $30 million in 2021 — a move that one alder, Marina Dimitrijevic, said shows the council is "united, listening and acting now on community demands for change."

In a tweet last week, the department linked the homicide increase to this year's budget decrease, which meant a reduction of 60 officers.

"We make the job of policing an easier job," Johnson said. "We could, with the will, make our communities healthier and safer."

Meanwhile, Johnson said between now and when the budget is introduced in September, the city’s budget office can come up with various spending models for the money.

"Police officers have a very difficult, dangerous and necessary job," Johnson said. "Unfortunately, we are in a perpetual system of flawed funding. For the past several years, the police department’s budget has gobbled up every single property tax dollar and several million more dollars. In 2020, they are asking for more money."