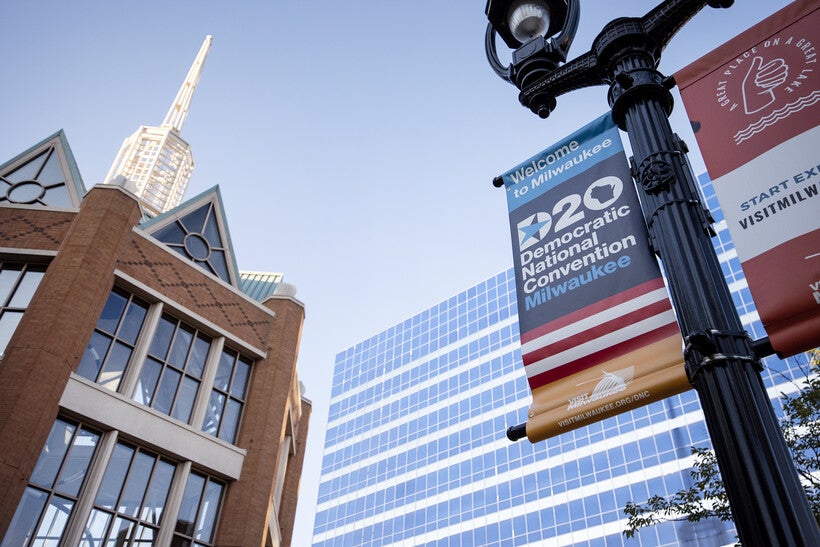 A sign for the Democratic National Convention hangs outside the Wisconsin Center on Thursday, Aug. 13, 2020, in Milwaukee. Angela Major/WPR

The city of Milwaukee would like a redo as host of the 2024 Democratic National Convention.

"Our response is an enthusiastic YES!" Milwaukee Mayor Tom Barrett wrote in a letter to Jaime Harrison, chair of the Democratic National Committee.

Milwaukee was chosen in March 2019 over Houston and Miami to host the 2020 Democratic National Convention. It would have been the first time in more than a century that Democrats gathered in a Midwest city other than Chicago to nominate their U.S. presidential candidate.

The convention was expected to have a $200 million economic impact in Wisconsin. It would have brought business to dozens of downtown hotels, restaurants and bars. But the event was first postponed due to the COVID-19 pandemic and then significantly scaled back to a mostly virtual format. Eventually, the news came that Joe Biden wouldn't come to Milwaukee to accept the presidential nomination.

Barrett told the committee that Milwaukee was ready to put on a great event and is set to do it again.

"We are ready with facilities and hotel accommodations to fully meet the convention's needs. In fact, Milwaukee will be particularly well situated in 2024 with a newly expanded convention center in proximity to the Fiserv Forum arena," he wrote. "Milwaukee is a city of winners — our people, our businesses, and, yes, our major league sports teams."

In his letter, Barrett said Wisconsin is neither red nor blue, but a location where both major political parties want to make a statement and encourage voters to join them.

"We care about our neighbors who face challenges, understanding government plays a vital role in promoting fairness and protecting people from harm," Barrett wrote.

Barrett, who has spent his career in politics and served as mayor for 17 years, said in 2019 hosting the DNC would have been an honor. If Milwaukee is again chosen, he will likely not be living in the city. The Biden administration has nominated him to be U.S. ambassador to Luxembourg. He is awaiting U.S. Senate confirmation.

"The ambassador nomination will have no impact. This will be a community effort led by people here locally. That's going to remain the same regardless of whoever is mayor," Barrett said.

Wisconsin and the Midwest was of strategic importance when Milwaukee was last chosen to host the national nominating convention. The decision came after Democratic presidential contender Hillary Clinton narrowly lost the state to former Republican President Donald Trump in 2016.

Convention hosts could be looking at other strategic opportunities for 2024. But Barrett said Tuesday afternoon he believes Milwaukee has a great shot at getting the DNC again because of the solid proposal the city put together last time.

"And if we put together anything close to what we put together in 2020, I think we're going to be right there, among the lead horses," Barrett said. "The step I took was to let the Democratic National Committed know that we are interested in putting a bid in."

Milwaukee was one of 20 cities to be asked if it was interested. The formal request for proposal for the 2024 Democratic National Convention will be released later this year.