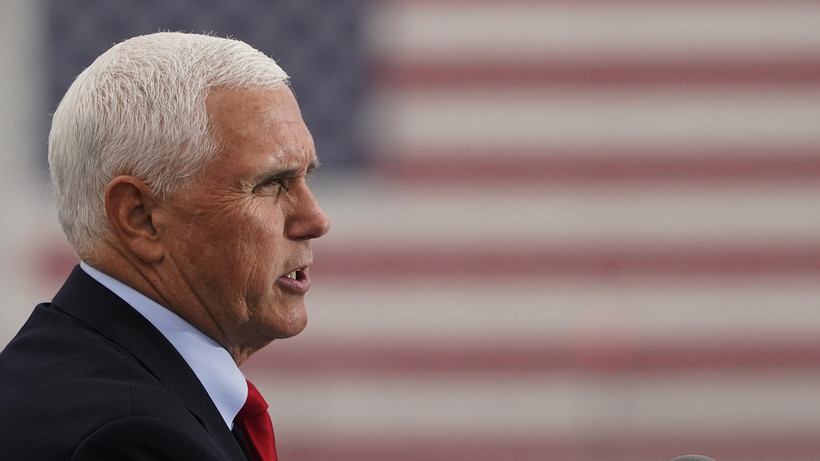 In a campaign stop Wednesday in central Wisconsin, Vice President Mike Pence touted the Trump administration's economic record in its first three years and said a vaccine that would protect against COVID-19 could come before the end of 2020.

The vice president spoke to a crowd outdoors at the Central Wisconsin Airport in Mosinee, south of Wausau. In the first 30 minutes of his 45-minute-long speech, he repeatedly referred to economic accomplishments of the Trump administration from 2017 to 2019, and he boasted of endorsements from manufacturers and dairy business groups.

"Then 2020 arrived, and the coronavirus struck our shores from China," Pence said.

He expressed sympathy for those who have lost family members to COVID-19, and said the administration's record had saved more than 1 million lives.

"We reinvented testing, doing more testing than any nation on earth, by far," he said. "We saw to the development and the production of billions of medical supplies for our incredible doctors, and nurses, and health care providers. We saw to the development of medicines called therapeutics that are saving lives even as we speak, and we are on track, Wisconsin, to have the first safe and effective coronavirus vaccine before the end of this year."

President Donald Trump previously claimed a vaccine would be approved before the election, but that has not happened. However, Dr. Anthony Fauci, a leading scientist on the effort, recently said the results of key vaccine trials could be known by December.

As of Wednesday afternoon, the Wausau metro area was ranked the sixth-worst place in the United States for the pandemic, according to the New York Times. The metro area of about 136,000 people has seen nearly 2,100 recent cases in the last two weeks. Aspirus Wausau Hospital opened a new unit for COVID-19 patients this month, and it and other central Wisconsin hospitals have been overwhelmed by the spike in patients and have had to transfer some to other facilities.

Pence has continued to make campaign appearances even though just days ago at least five of his staffers tested positive for the coronavirus, including his chief of staff and a close aide. Since late February, Pence has been chair of the White House Coronavirus Task Force.

In a CNN interview Wednesday morning, Trump campaign spokesperson Hogan Gidley was asked whether the fact that hospitals in central Wisconsin have been overwhelmed by COVID-19 cases "gives the vice president any pause about going there and holding a big rally."

"No, it doesn’t," Gidley said."The vice president has the best doctors in the world around him."

Gidley did not address whether the rally could be dangerous to attendees, or the fact that it violates guidance from state and federal health officials, who advise against large gatherings.

At the rally, Pence contrasted Trump's approach to the pandemic with that of his opponent, Democrat Joe Biden.

"We’re going to keep saving lives and developing life-saving medicines," Pence said. "And as we do that, with Joe Biden talking about shutting down our economy, we’re opening up America again."

The rally came about six weeks after Trump rallied voters at the very same airport. It's part of a region the Trump-Pence ticket hopes to win by high margins: In 2016, Trump won Marathon County by 18 points, earning 56 percent of the vote to Democrat Hillary Clinton’s 38 percent.

Republicans will likely need to win by big margins in small cities and rural areas in the state in order to counteract losses in the state’s largest cities, which tend to vote Democratic by large margins.

Trump has held numerous rallies in Wisconsin, some taking place after his own COVID-19 diagnosis. On Saturday he spoke in Waukesha, and on Tuesday in West Salem.

Democrats have consistently called the rallies irresponsible. In a statement, Democratic Party spokesperson Philip Shulman said Trump and Pence "have declared they are done trying to manage the COVID-19 pandemic, and his campaign is nothing more than a reminder to voters that he has completely failed to keep Wisconsinites safe."

Wisconsin has averaged more than 3,900 new coronavirus infections in the past week, according to the state Department of Health Services. Forty-five people died from COVID-19 on Wednesday, and 1,897 people in total have died from the disease in the state.