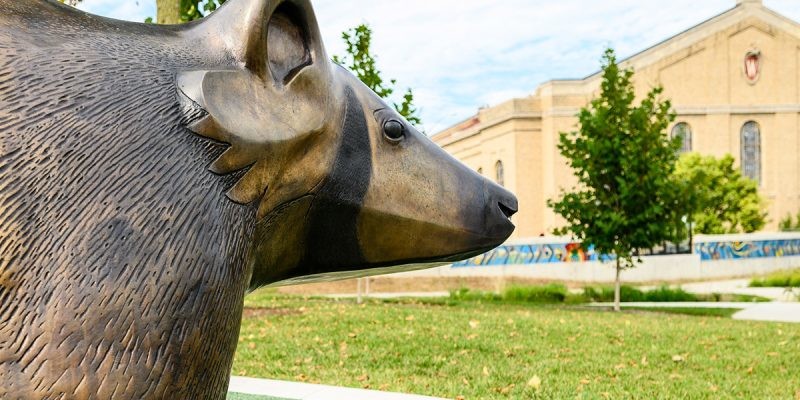 A bronze statue, titled The Badger, created by late Ho-Chunk artist Harry Whitehorse sits across from Camp Randall Stadium and the UW Field House at the University of Wisconsin-Madison. Photo courtesy of UW-Madison

They can, of course, convey concise and relevant historical information. But they are limited to one point in time, said Kasey Keeler, an assistant professor of civil society and community studies and American Indian studies at the University of Wisconsin-Madison.

That’s why Keeler is leading a project, "Mapping Dejope: Indigenous Histories and Presence in Madison," which will make Indigenous history of the area digitally accessible.

"It's a living entity so that it can continuously be updated as needed, providing more information as it comes in," Keeler said recently on WPR’s "The Morning Show." "Then people have their phone right at their fingertips. So, if they see something that sparks interest, they can also dig in more." 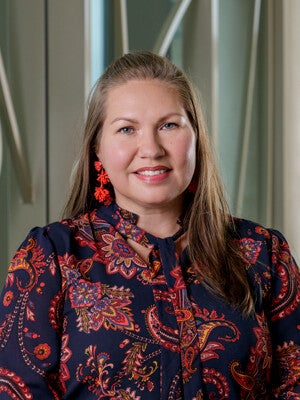 The initiative received a seed project grant from the Baldwin Wisconsin Idea Endowment this year, according to the UW-Madison School of Human Ecology. The maximum amount awarded from these grants is $4,000.

Other funds are also coming from the School of Human Ecology’s Indigenous EcoWell Initiative.

The exact format of the project is not yet fully clear, Keeler said. As of now, they are planning for a digital app and web-accessible version.

Keeler said the project will collect stories from Ho-Chunk Nation members — and crucially, the funding will help pay them for it.

"Something that is often lost is that folks often expect Native community members to participate in different events without compensating them for their knowledge and for their time," she said. "(Paying them) is so important in doing this kind of work."

In 2016, Camp Randall Stadium put up a sign at one of its entrance identifying the areas as "Ho-Chunk Nation Plaza." The sign, Keeler said, is big, red and very hard to miss.

It acts as a symbol of the relationship between the Ho-Chunk Nation and the university. She said it’s a good reminder for tens of thousands of fans who attend football games about whose land they’re all on.

But it didn’t come for free. The Ho-Chunk Nation paid about $2 million for the naming rights, she said.

For Keeler, it's important the project gets into the thorny matters of Native history, especially as it pertains to land dispossession and forced removal considering the university sits atop Ho-Chunk land.

"A lot of the goal of this digital project is to push back on colonialism and to really question what we've been taught and what we think we know about this area that we call Madison today," she said.

She also said she would like to see more conversation at UW-Madison about moving beyond acknowledging past wrongs into righting those wrongs, such as having tuition waivers for Native students.

Keeler has been at the university for four years. She has taught larger, introductory classes in which she sees a need for students to connect with the landscape around them in Madison. Her own areas of interest include place-making, identity and the names of places.

Part of the story of the land UW-Madison occupies goes back to 1866, when it became a land-grant institution.

LISTEN: Reaction from the 2022 State of the Tribes address

Keeler said land-grant institutions have been celebrated for making education more accessible. But accessible for whom?

"It's a really complicated history that myself and some other colleagues at the University of Wisconsin are really trying to dig into and provide resources to folks to learn more about this history," she said.

Keeler said the project was "just barely getting off the ground." She is hoping to have a version of the digital map go live in the fall.