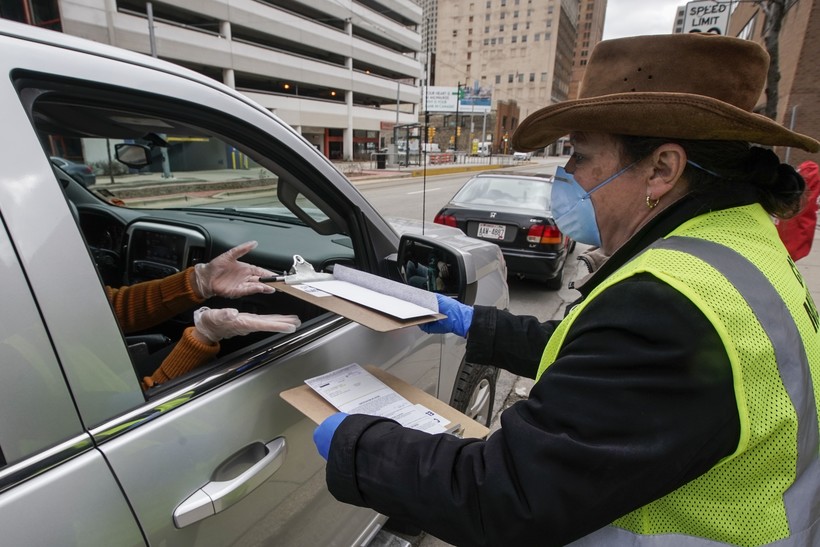 Live: What To Know April 3 About COVID-19 In Wisconsin

The number of positive cases of COVID-19 in the state continues to grow.

The state Department of Health Services announced Friday there are 1,916 positive cases of COVID-19 statewide, as well as 22,377 negative tests. However, the number continues to grow as counties announce positive cases. According to figures from DHS, 37 people in Wisconsin have died from COVID-19 as of Friday afternoon. That does not include nine additional deaths in Milwaukee County.

The Milwaukee County Medical Examiner's office announced in a tweet that 28 people have died from complications of the new coronavirus.

According to the office's website, two deaths were reported on April 3 including an 82 year-old male and a 93 year-old male.

2:04 PM: Perez Promises As 'Robust A Convention As Possible' For DNC

Democratic National Committee Chairman Tom Perez said the party's convention in Milwaukee will be as robust as possible, despite a five-week delay due to concerns over the coronavirus pandemic.

Perez wouldn’t say in an interview Friday with the Associated Press what specific changes may be in store for the meeting delayed a month from July to August.

He says, "We’re going to try and put on as robust a convention as possible in as safe a manner as possible."

Perez said he was determined to keep the convention in Milwaukee.

The Wisconsin Department of Health Services announced Friday 186 additional cases of COVID-19 have been confirmed in the state, taking Wisconsin's total number of confirmed cases to 1,916. DHS also reports 37 deaths and 487 hospitalizations related to the virus. The death total does not include nine additional deaths in Milwaukee County.

There are confirmed cases in 54 Wisconsin counties.

Across the state, 22,377 people have tested negative for the virus.

Democratic Gov. Tony Evers signed an executive order Friday calling the Legislature to meet in special session at 4 p.m. Saturday to take up changes on the election Tuesday.

Evers wants the Legislature to allow an all-mail election and to send a ballot to every registered voter who has not already requested an absentee ballot.

He also wants to extend the time to receive ballots to May 26.

"As we’ve faced these challenges over the past few weeks, I have also asked the people of our state to do their part to help. Well here’s the bottom line folks: if, as elected officials, we’re going to expect the people of our state to make sacrifices to keep all of us safe, then, by golly, we better be willing do our part, too. So, today I announced that I am calling the Legislature into a special session to do its part — just as all of us are — to help keep our neighbors, our families, and our communities safe," Gov. Evers said in a video.

Normally, the city would have 180 neighborhood-based voting centers and 1,400 people working. The city has around 350 workers this year.

"I’m very pleased that over 75,000 Milwaukee residents have already voted in this election through by-mail absentee, and I believe between requests submitted today and drive-up voting— continuing through Sunday— another 5,000 people will vote," said Neil Albrecht, executive director of the Milwaukee Election Commission. "This should sharply reduce Election Day voting."

Albrecht said he believes there could be between 3,000 and 4,000 people voting in-person on Election Day.

A federal judge issued an order to extend the state's deadline for accepting absentee ballots.

U.S. District Court Judge William Conley made the ruling Thursday after he denied a request to postpone Wisconsin's Tuesday election because of COVID-19 concerns.

The deadline to request an absentee ballot in the mail is 5 p.m. Friday, April 3.

Voters can request an absentee ballot online at myvote.wi.gov.

9:25 AM: UW-Milwaukee Launches Project To Help Track Spread Of COVID-19

A professor with the University of Wisconsin-Milwaukee's Zilber School of Public Health wants people who feel sick to report their symptoms in a confidential online survey at wecountcovid19.com.

Amy Kalkbrenner is an epidemiologist and said under-detection of the new coronavirus leaves health officials without proper data to slow the spread of the virus.

"Symptom data can be thought of as an 'early warning system,'" Kalkbrenner said. "If enough people are reporting, the symptom data should show an uptick quite a few days ahead of lab testing data. This would allow time for Milwaukee to ramp up the medical care personnel and equipment when it’s most needed."

The new site will collect information by zip codes and day. The results will be made available to local health departments and the public.

"Our ability to better understand COVID-19 relies on this survey reaching as many people as possible," Kalkbrenner said.

8:38 AM: Another Person Dies in Milwaukee County From COVID-19 Complications

Milwaukee County now has 24 confirmed deaths from complications of COVID-19.

The Milwaukee County Medical Examiner's Office tweeted Friday morning that another person died from complications of COVID-19. No further information was shared.

As of Friday morning, 40 people have died from the disease in Wisconsin based on state Department of Health Services and local data.

Mayor Tim Kabat declared a local state of emergency to protect residents from being exposed to the new coronavirus during the April 7 election.

The Wisconsin Election Commission has advised municipalities to change the number and location of polling sites to help combat the spread of the virus.

Conley did, however, order absentee ballots will be counted through 4 p.m. Monday, April 13. Voters now have until 5 p.m. Friday to request an absentee ballot.

Democrats are calling the ruling a victory. Lawyers for Republicans appealed the case almost immediately, asking a federal court in Chicago to step in and halt Conley's ruling.

Amid coronavirus concerns, some states have moved to postpone their primaries, while others have shifted to mail-in voting.

The Wisconsin Department of Health Services announced Thursday 180 additional cases of COVID-19 have been confirmed in the state, taking Wisconsin's total number of confirmed cases to 1,730. DHS also reports 31 deaths and 461 hospitalizations related to the virus.

There are confirmed cases in 52 Wisconsin counties.

Across the state, 20,317 people have tested negative for the virus.

Virologists from the University of Wisconsin-Madison have partnered with vaccine companies FluGen and Bharat Biotech to develop a vaccine for the new coronavirus, according to a news release from the university.

Called CoroFlu, the vaccine will be built on top of the group's existing flu vaccine candidate, which has been shown to be safe in initial trials.

Refinement and initial testing is expected to take three to six months. The new vaccine could be ready for human clinical trials this fall, according to the release.

THURSDAY: Milwaukee DNC Pushed To Week Of August 17 Due To Coronavirus Concerns

The convention will now take place the week of August 17. The delay will give organizers time to evaluate how to best structure the event given public health concerns, according to the committee.

The event is expected to draw thousands of people to southeast Wisconsin. According to the host committee, the group confirmed Fiserv Forum, the Wisconsin Center District and hotels in the area will be available in August.

"The City of Milwaukee welcomed our convention team with open arms over a year ago when our convention planning first kicked off," Democratic National Convention Committee CEO Joe Solmonese said in the release. "We remain inspired by the people who live and work here, and we remain committed to hosting this historic moment in their hometown."

Milwaukee has been the hardest hit area of Wisconsin so far in the COVID-19 outbreak.

State Fair Park in West Allis and the Wisconsin Center District (WCD) in downtown Milwaukee are being considered by the U.S. Army Corps of Engineers as alternative care sites.

These sites are part of a nationwide effort by Federal Emergency Management Agency. The facilities are meant to free up space in hospitals for patients who don’t require intensive care.

Marty Brooks, president and chief executive officer of WCD, said the Army Corps is looking for a site large enough to accommodate 1,200 beds.

Brooks said each site takes about two weeks to set up and will be operational for about 90 days.