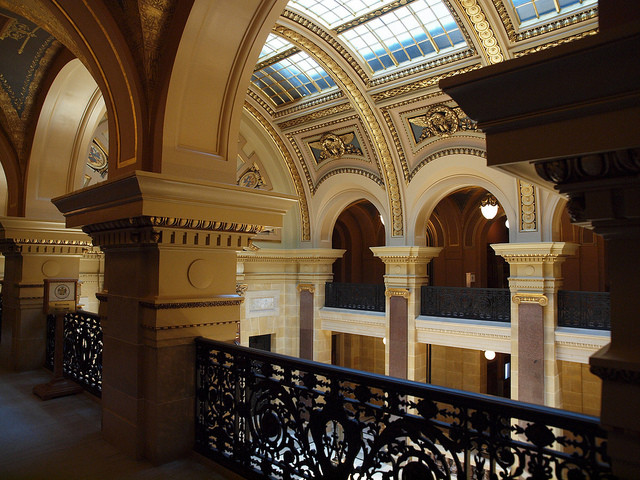 The second day of Evers administration budget briefings before the committee saw testimony from the state departments of natural resources, corrections and workforce development.  It comes a day after lawmakers called for a reset of the governor’s plans for education, roads and health care.

The dialogue is part of an evolving process of the Republican-controlled Legislature and Democratic governor to find common ground on a two-year spending plan for the state.

During testimony from the head of the Department of Workforce Development, Republicans clashed with Democrats and the Evers administration over the minimum wage, drug testing for those receiving unemployment benefits and rolling back marquee Gov. Scott Walker-era policies, like right-to-work.

Under the governor's plan, the minimum wage would increase by $1 in January with subsequent 75 cent increases in each of the next three years before indexing the wage to inflation in 2024.

GOP lawmakers on the committee argued the plan would hurt the economy.

"What's the ripple effect to employers when we impose more expenses on them?" said Rep. Zimmerman.

"It shouldn’t be a partisan issue," said Rep. Chris Taylor, D-Madison. "We are lagging behind (other states) once more in not increasing our minimum wage."

Republican lawmakers also pointed to the state's historically low unemployment rate and criticized the governor's budget for not doing more to attract workers to Wisconsin.

The governor’s plan eliminates funding for a marketing program aimed at attracting millennials, veterans and University of Wisconsin System graduates who have moved out to state to Wisconsin.

Democrats on the committee argued that is the right move, saying the state should focus on creating an attractive environment for those people, rather than marketing to them.

"You need to create communities they want to live in," Taylor said.

Evers would also increase unemployment benefits and remove drug testing for unemployment insurance. Republican lawmakers said that would make it too easy for some to live on those benefits, without seeking work.

"It makes it easier to stay at home," said Rep. John Nygren, R-Marinette. "I would suggest this budget is riddled with free rides."

Republicans also expressed concern about Evers' proposals to roll back Wisconsin’s right-to-work law and reinstate the prevailing wage on state construction projects, both of which were important to the Walker administration.

"I think a lot of those policies we’ve implemented are the reason we’re in the position we are today," said Sen. Duey Stroebel, R-Saukville.

Under the governor's budget, closure of the Lincoln Hills School for Boys and Copper Lake School for Girls would be delayed until whenever new, regional facilities are developed to house the inmates.

Last year, Walker signed a law decreeing the facilities would be shuttered by 2021, following years of reported inmate abuse and mistreatment.

"The governor and I want to close Lincoln Hills as soon as there is an appropriate facility to accept our youth," Carr said.

Lincoln Hills and a number of other correctional facilities across the state are facing staffing shortages. In an effort to combat that, the governor’s budget would also increase pay for correctional officers to about $18 per hour.

According to DOC research, Wisconsin’s roughly $16-per-hour salary for correctional officers falls well below the regional average of roughly $22-per-hour.

"We have a serious problem here," said Olsen. "We have serious competition."

According to the Evers administration, Wisconsin is one of a handful of states that allows 17-year-olds to be tried as adults. The governor’s plan would increase the age for charging juveniles as adults from 17 to 18. That transition would begin in 2021.

Lawmakers also pointed out Evers’ budget doesn’t include any elements aimed at reducing the state prison population — something he campaigned on doing.

"I think it’s a cop out from the administration," Nygren said.

Testimony from the head of the state Department of Natural Resources focused on the state’s efforts to improve water quality.

Evers’ proposal includes borrowing up to $70 million for water quality programs. He has proclaimed 2019 the "Year of Clean Drinking Water" in Wisconsin and proposed $2 million to the state’s Well Compensation Grant program to help individuals replace or treat contaminated private wells.

"We need to address the source or sources of well contamination," said DNR Secretary Preston Cole.

"The solution has to be how it migrates and how fast it goes," Cole said. "Our perspective is, what’s the research?"

The governor’s budget would also create a Bureau of Natural Resources Science, with five new full-time scientists, within the DNR.

Two of those scientists would focus on PFAS, a class of hazardous compounds found in household items, including non-stick cookware, as well as firefighting foam.