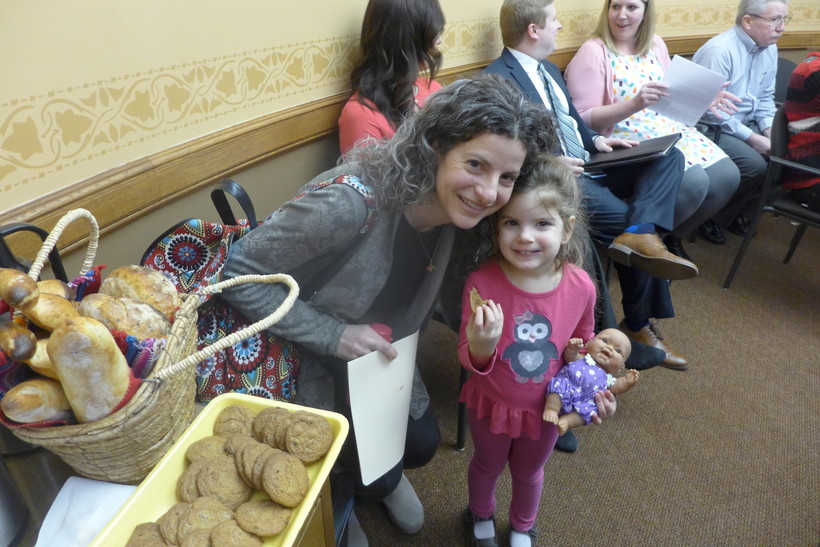 Alisa Hooper, of Stoughton, left, with her daughter Anna, right, before a Legislative hearing on a bill that would regulate home baked goods that are sold on Wednesday, Feb. 14, 2018. Shamane Mills/WPR 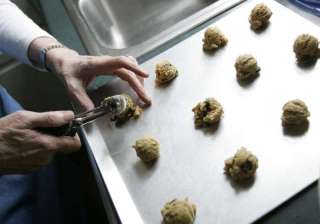 State lawmakers are again considering a plan that would regulate home baked goods like those made by commercial bakers.

This latest bill comes in the wake of a May court ruling which overturned the state’s ban on selling home baked goods.

Rep. Jim Ott, R-Mequon, is the author of a bill that would put a $10,000 cap on the amount of sales a home baker could make before triggering extra regulation.

Ott stressed that he supports those who make bread, muffins and cookies to sell directly to consumers at farmers markets and other face-to-face venues. But he urged home bakers to get behind his plan.

"If you don’t pass any bill at all, obviously the advantage to that is if you are a home baker you are not going to be limited by $10,000, you could go beyond that and probably nobody will say anything," Ott said at a public hearing Wednesday on the plan. "But suppose somebody goes way over $10,000 or suppose, because DATCP (Wisconsin Department of Agriculture, Trade and Consumer Protection) doesn’t have any guidance anymore to administer the law in this area, suppose somebody goofs up and maybe sells products that don’t turn out so well. I think that’s going to harm all home bakers."

But home bakers like Alisa Hooper, of Stoughton, pushed back. Hooper brought a basket of fresh bread to the hearing and shared it with lawmakers.

"I think the $10,000 cap is just ridiculous," Hooper said. "To invest the amount of time and energy it takes to have a small business and then to say you can only make $10,000 and that’s before taxes and everything. It’s really stifling.”

Other bakers were also opposed to a cap they say is too low.

Pam Barnes, of Sole Passion Baker in Mount Horeb, became tearful when she told lawmakers how she dreamed of being a baker since age 12 and now is working hard to start her own business.

"I am not only the baker in my business. I’m also the marketer, I’m the dishwasher, the janitor, packager, delivery driver, recipe and product developer, and I need pay myself a fair wage," she said.

But public health officials, commercial bakers and restaurants want stricter regulations for home bakers than what Ott is proposing.

The Wisconsin Restaurant Association also has concerns about competition, because many restaurants have bakeries as a way to diversify their business.

"Our restaurant profit margins run from anywhere from 2 to 3 to 4 percent here in Wisconsin. That’s pretty razor thin. So they’re looking at ways they can branch out and diversify," said Susan Quam, executive vice president of WRA.

Some who support home bakers questioned whether a bill is even needed because a recent court ruling allows home bakers to sell goods as long as they have low moisture content and a low pH to make them shelf stable.

"This bill would not provide any additional opportunities to home bakers that they don’t already have," said Kara O’Connor, government relations director for the Wisconsin Farmer’s Union. "The only thing this bill would do is impose additional restrictions on home bakers."

The bill, if passed, would also apply to homemade canned goods.