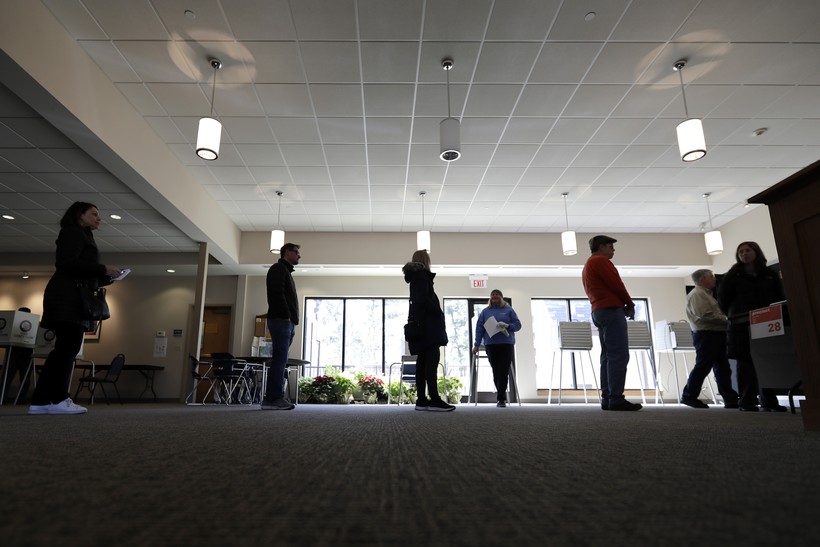 Evanston residents line up for voting at Trinity Lutheran Church in Evanston, Ill., Tuesday, March 17, 2020. Some polling places in Evanston have been moved in an effort to reduce exposure of senior citizens to the COVID-19 coronavirus. Nam Y. Huh/AP Photo

Judge: Election Amid Pandemic 'On The Hands' of Legislature, Governor

A federal judge heard arguments Wednesday in a lawsuit seeking to delay Wisconsin's April 7 election as cases of the new coronavirus grow in Wisconsin — and indicated he's unlikely to make the change.

The lawsuit is the combined effort of a broad coalition of groups, including the state and national Democratic parties, the League of Women Voters of Wisconsin and a number of groups representing minority communities.

It argues Wisconsin can't safely and effectively administer the April 7 election amid the COVID-19 pandemic and seeks a number of changes, including postponing the date and lifting other deadlines and requirements related to voting in the state.

During Wednesday's arguments, federal Judge William Conley indicated he doesn't believe he has the authority to delay the election. He said he thinks that is up to Gov. Tony Evers or the state Legislature.

"You don’t get to go to a federal judge and say (conditions are) impinging on voting rights so you get to stop a statewide election," Conley said during closing arguments. "I’m sorry that’s what the situation is, but this is a public health crisis that the state Legislature and governor have refused to accept as severe enough to stop this statewide election."

Conley said he believes some people could contract COVID-19 and die after participating in the election.

"And that may be something that happens that would be outside my jurisdiction, but it will be on the hands of the state Legislature and the governor," he said.

Evers and the leaders of the Republican-controlled Legislature have said for weeks they don't support delaying the election. They argue it should proceed as scheduled, in part because many local offices are on the ballot across the state. Some local governments would face uncertainty and vacancies in offices like county executive, county board and mayor if the election were to be delayed.

In a brief filed with the court on Tuesday, an attorney for Evers said the court may wish to take "a middle path" in terms of election administration — not leaving the election as-is, but not postponing it, either.

"To the extent that this Court concludes that relief is appropriate, the Governor respectfully submits that this Court should consider a middle path that maintains the democratic process, while also implementing appropriate measures to save lives," the filing read.

The governor suggested the following changes:

The brief argued implementing those measures, aimed at encouraging voting by mail, would make it safer and less crowded for people who have to vote in person on Election Day.

During argument, Conley indicated he isn't open to lifting the witness signature requirement.

"There’s got to be a way for these people to get a witness. Perhaps it’s true that some will just not come up with a solution, but there are solutions out there for them," he said. "If they have one friend, they can satisfy the witness requirement."

He also hinted he wouldn't be willing to lift the state's requirement to include a copy of an ID valid for voting with an absentee ballot application. He pointed out Wisconsin's voter ID law has been upheld in a number of court challenges and that, in his view, "COVID-19 has not substantially changed the burdens that people face" meeting the requirement.

"Since the (Wisconsin Elections Commission) has made clear that extending the postmark date to April 7 and the receipt date to April 13 is something that's doable within the confines of the goal of holding the election, that seems to me (to be) a reasonable step that we can take," he said.

At the end of the hearing, Conley said he will rule "as soon as possible."

Wednesday's arguments came as election officials across Wisconsin continue to grapple with administering the election. Clerks' challenges include a major shortage of poll workers and concerns about how long it will take to count an unprecedented number of mail-in ballots on Election Day. Counting absentee ballots takes longer than traditional ballots because they require additional sorting and evaluation.

The Wisconsin Supreme Court ruled Tuesday in another case related to the election. That case, between the Republican Party of Wisconsin and the Dane County Clerk, was about the clerk's guidance to absentee voters. The court ruled in favor of the GOP.

Ramping Up Its COVID Response, EU Will Buy Up To 1.8B Doses Of Pfizer Vaccine
Duck Tales: Man Uses Naval Skills To Get 11 Ducklings Down 9 Stories
Opinion: As NPR Turns 50, Scott Simon's View From Behind The Microphone
David Swensen, The Greatest Investor You Maybe Never Heard Of, Leaves Powerful Legacy
103-Year-Old COVID Survivor Has Advice For The Unvaccinated